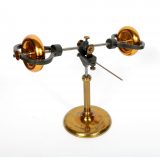 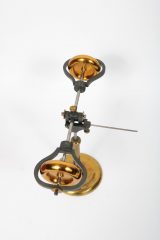 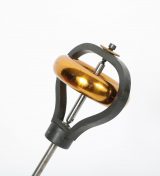 This instrument is contained inside a wooden box with a brass-coloured handle on the top. The box is hinged on the side and is opened with a key. The instrument is fitted into a semi-circular wooden cut-out that sits to the back of the box; the inside of this is lined with green felt. There are wooden slots, also lined with green felt, affixed to the top of the box into which the arms of the instrument can be fitted. There are other wooden fixtures for storing other components in the box.

The instrument itself is made wholly of metal and stands on a circular metal base with a single support tube rising from the centre. This supports a metal rod fixed to a central axel that allows it to tilt. At either end of this are gyroscopic wheels with metal rods on two sides. These are fitted to short metal rods with pointed ends that allow the rods to rotate. independently of the central rods. Also connected to the centre support, and just below the gyroscope component, there is a bracket that holds out a narrow rod horizontally and perpendicular to the main rod that supports the gyroscope wheels.

Also in the box are two short lengths of wood with cotton string wound around them; these are different in length and width. There are two stacks of three circular weights piled on top of one another. These have a vertical rod through the centre which is connected at the top to a horizontal metal strip that has two hooks affixed to the top of it. There is also a metal component consisting of a metal disc with a short length of metal rod emerging from the centre of the disk, and a piece of wire in the shape of a hook attached to the top of this.

On a paper stick stuck to the rear of the interior of the box: “NEWTON & CO
Opticians and Scientific Instrument Makers
To His Majesty The King & H.R.H. The Prince of Wales
3. FLEET STREET LONDON”

Engraved on the round base of the instrument: “NEWTON & Co
3. FLEET ST. LONDON”

This gyroscope instrument was likely used for physics experiments as a teaching or demonstration tool. A gyroscope is a device for measuring or maintaining orientation, based on the principles of angular momentum. In physics, angular momentum, a moment of momentum, or rotational momentum is a measure of the amount of rotation an object has, taking into account its mass, shape, and speed.

Very Good: The box is in good condition, with only a few small nicks and marks on the surface. At some of the joins, the wood is coming apart. There is a split in the wood through the middle of the door which extends from the base of the door to near to the top. The interior of the box is marked and stained on the base. There are scratches on both sides where the ends of the instrument have scraped along the sides of the box.

The gyroscope is in excellent condition. Its surface is very slightly marked, with some signs of corrosion on the main support rod.

The components in the box are in good condition, with the paint on the weights worn off in many places. At least one of the wooden sections is a replacement for an original. The attached string is yellowed and frayed.