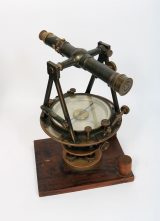 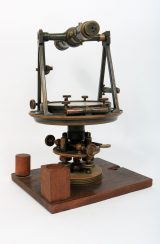 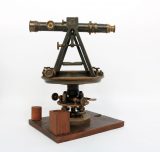 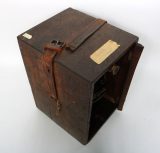 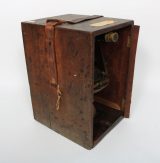 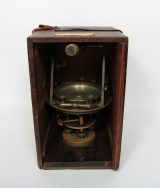 The instrument is housed inside wooden storage box with a leather handle on the top, with a belt clasp. The door of the box has come off at the hinges and is separate in two pieces (2019.ast.6.2-3).

The instrument resting on a rectangular wooden base with two wooden blocks on two corners and an indentation in the middle intended to assist with sliding the base and instrument out of the box. At the base of the instrument are a series of tiers consisting of round disks with adjustable and non adjustable metal components. The entire instrument rotates upon a central ball bearing on top of the metal base tier which rests upon the wooden base.

Supported by this base is a large round compass face covered in glass, with the circumference graduated in degrees scales and a central freely rotating indicator needle. Cardinal directions are also inscribed on the face of the compass. Around the edge of the compass on a ledge outside it and opposite one another there are two arc-shaped graduated scales behind glass, labelled in three different scales. Also on this ledge are two bubble levels filled with clear liquid and a number of knurled knobs for adjustment.

Two pairs of triangular legs standing on the compass tier ledge support a metal telescope with a metal lens cover cap at one end (with a lens underneath) and an eyepiece at the end. The telescope is supported by a rod in its centre that enables it to tilt in one dimension.

On the box handwritten on a piece of masking tape: “Gurley Transit”

A transit is for measuring horizontal angles between sighted objects.

Good: The box is in bad condition, quite damaged and worn on its surface. The door of the box has come off at the hinge and is stored separately from the instrument in two pieces, one quite large and one a long strip of wood. The leather belt handle is extremely worn and has broken across the point of one of the holes. The end of the belt is missing.

Instrument is in excellent condition except for some signs of wear on the wooden base. The metal surfaces are dulled/tarnished, or perhaps enameled in a dark colour. Elements of the metal pieces, such as edges and knobs, that have been frequently touched, are lighter in colour than the surrounding surfaces.

This artifact may have been used for teaching or research at the Department for the Astronomy & Astrophysics or at the David Dunlap Observatory. If the former, it was probably moved at some point to the Observatory for storage. The transit was kept at the David Dunlap Observatory until 2009. Upon the sale of the Observatory, it was moved to the University of Toronto’s Department of Astronomy & Astrophysics at the St George Campus. In 2017 it was moved to a new storage location in McLennan Physical Laboratories.