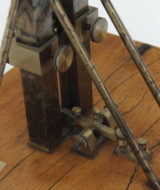 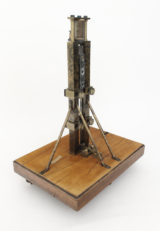 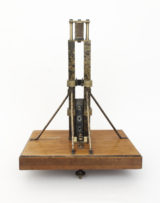 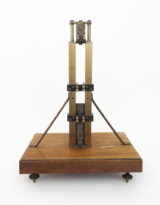 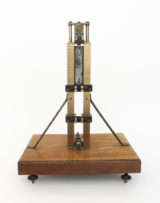 An instrument based on a known weight falling a set distance. The instruments is mounted upon a wooden base that has three adjustable legs for leveling. The instrument is secured to the base by 4 diagonal support rods and 2 central screws. The instrument is composed of two main working parts made of metal, mostly brass: a level and two pillars with adjustable components attached. The level controls the weight in the centre of the tower and rests upon a spring at one end. The pillars consist of two parallel rectangular columns. These are connected to each other by 2 horizontal adjustable bars which can be moved up and down the columns and tightened into place with screws. Between two of the adjustable components rests a weight comprised of one grey and one black metal rectangle fused together. Atop the two pillars rests a coil of copper wire attached to circuit connections. The wire is likely copper covered in a fine fabric. On the side of the base is a sticker with the old catalog tag. There is a scale on the front of the left pillar measured in centimeters.

An instrument based on a known weight falling a set distance. The fall of the weight, which is released by an electromagnet, is guided on either side by brass pillars. The falling weight opens and closes an electrical circuit, producing a timed impulse. The instrument is used to calibrate precision timing devices such as the Hipp Chronoscope. Wundt’s Hammer Control Apparatus performed the same function.

Good: some corrosion, oxidization, fracturing, missing parts, and residues. The metal columns (except for the front side) and support struts are covered in irregular curling lines and scratch marks.

Department of Psychology, University of Toronto

The control instrument was the fundamental timing device of the laboratory upon which all timing calibrations relied. According to Titchener [1905; 1915], proper use of control apparatus depended on a good amount of precision, constant oversight, and mastery of operation. Experienced researchers tended to use complex control apparatus, while less experienced undergraduates used primitive, simpler instruments. Wundt’s famous Hammer Control Apparatus, for example, could only be used by a select group of people.

Operation of various Control Instruments depended much on the tacit knowledge, experience, personal choice, and idiosyncrasies of a given researcher. Experimenters became partial to using one of the three variations of the control instruments – hammer, pendulum or gravity chronometers. Each kind of control instrument had a family of variations – some complex, some simple.

2) Cattell, McK. J. (1886b). “The Time Taken Up by Cerebral Operations,” Mind, 11: 220-242. Provided by Classics in the History of Psychology An internet resource developed by Christopher D. Green, York University, Toronto, Ontario