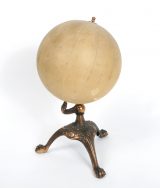 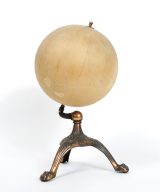 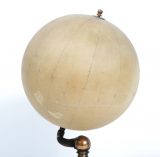 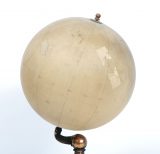 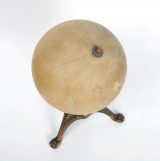 This is a globe covered with plain brown paper, on a metal stand. The copper-coloured metal stand has three feet, each of the them moulded like a lion’s foot. These join together into an ornamental triangular section which rises vertically and connects to an arm that branches outward before turning upwards to support the globe at a slight inclination. The globe is supported and rotates on a metal rod that runs through the central axis of the globe and ends just above the top pole with a small wooden rounded knob.

The globe is covered with brown paper gores which reach from pole to pole. This is marked with a faint grid of latitude and longitude lines. Three of these lines are marked darker grey ink than the others: The equator is labelled by hand in red ink in roman numerals from I to XXIV around the circumference, and a meridian line in arabic numbers from ‘0’ at the equator and to ’90’ at the poles. There is also a line passing at an inclined arc through the equator at the ‘XXIV’ marking, likely marking the celestial ecliptic.

Written in white paint on the metal base: “G21”

This globe may have been modified following its original purchase for mathematical demonstrations on a sphere, possibly in an astronomical context.

Good: The metal base of the globe is discoloured and oxidized in places, particularly in recessed or less accessible areas.

The paper covering and red-ink markings of the globe appears to be a modification. Likely the original globe depicted the Earth. The paper is yellowed, and marked with patches of water damage and some faint grey markings. In a few places, the edges of the paper sections is slightly raised and peeling. There is a small ‘v’-shaped indentation on one side. The top of the globe is greyed and smudged compared to the lower portion of the globe.

Following its purchase, this globe was likely modified at by the Department of Physics or the Department of Astronomy & Astrophysics at the University of Toronto for teaching. In the 2000s, it was found in a room in the McLennan Physical Laboratories building on the U of T St George campus, and moved to the Astronomy Library for storage and display.