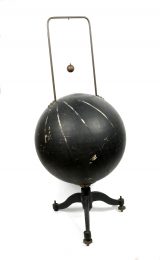 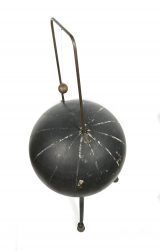 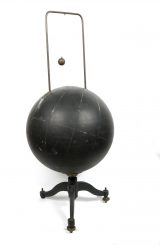 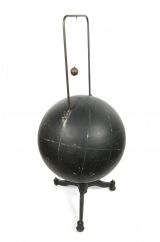 This is a large globe, painted black, on a heavy tripod base. Affixed to the top there is a metal bracket with a metal ball hanging from the top. The base has three iron legs, two of which have adjustable screw feet. These join together with a cylindrical section into which there is a large rod which supports the globe and allows it to rotate freely on a vertical axis.

The globe is large, and painted black. Lighter coloured markings indicating the equator and longitude lines indicate an axis different from that which the globe rotates at. Other markings are visible underneath the paint, perhaps indicating original paper covering and gores.

Printed on a sticker affixed to the base: “UNIVERSITY OF TORONTO
ASTRONOMY
DAVID DUNLAP OBSERVATORY”

Written on a sticker affixed to the base of the globe: “AST22”

This globe was likely modified following its original purchase for mathematical demonstrations on a sphere, possibly in an astronomical context.

Good: The metal base is in good condition, with very little sign of corrosion. However, one of the screw feet adjusters is missing.

The globe was likely modified by being painted black. The edges of paper gores underneath the paint are faintly visible. The equator and longitude markings are not very clearly marked and appaer to have been formed by the application of a narrow tape, which has since been removed, and has torn off the black paint surface. In other places, similar damage has occurred. In some places, this has been caused by the application of ‘invisible’ tape that has been removed; in places, some of the tape is still applied.

The bracket is firmly attached but there are small cracks in the sealant used to fix the bracket to the surface of the globe.