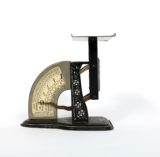 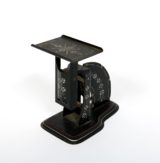 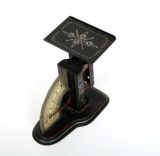 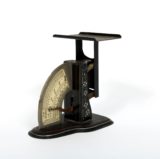 This is a small spring-run metal weighing scale. It consists of a small ornamented weighing platform fixed to a spring tucked inside a cover. When items are placed on the weighing platform, an indicator arm moves against a quarter-circle paper scale to indicate the weight of the object.

On the paper scale: “THE GEM POSTAL SCALE”

On an embossed sticker stuck to the base of the scale: “DUNLAP OBS.”

This scale automatically indicates the price of mailing certain items such as letters or books.

Very Good: The surface of the scale is slightly scratched in papers. The paper scale is yellowed, but otherwise in good condition. The exposed metal components, such as the spring and indicator arm, are rusted. The stamped patent information is also rusted around the lettering.