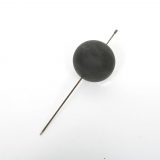 This is an Earth, Sun & Moon system model contained within a large wooden box. The box is roughly square in size, with a small metal handle on one side and two metal latches on two different sides of the box. The lid, once unlatched, lifts off entirely. When stored, the instrument is disassembled. Most of the pieces are held in place inside the box by wooden supports with rotating latches to hold them in place; others are loose. In both the lid and base there are short lengths of string attached by nails at either end to the wood of the box.

The base of the orrery is fixed in place inside the top of the box. It consists of a circular wooden disc formed of a number of layers of wood on top of one another. Running around circumference of the disk, on the outer edge, there are a pair of slots, one deeper and wider than the other. There is a circular paper printed image affixed to the centre of the top of the disc; this contains astronomical information. Set in the centre of the disk, standing vertically, there is a metal rod. This can be laid flat to store the disk in the box.

In the box, there is a wooden frame formed of several rectangular rods of wood that are attached to a collapsible frame. At one end of this, there is a piece of wood with a hole in the middle of it; this slots over the central rod in the base. Fitted on top of the wooden frame there is a frame formed of rigid wires, with curved metal sections attached. This frame holds up a 5″ diameter model of the Earth with a vertical metal rod through the centre. The centre rod is slotted into loops on the wooden frame and allows the Earth model to be rotated on its axis.

When the model is erected, a metal piece fits into the lower slot around the disk rim. This supports the metal the frame so that the Earth model can rotate relatively freely in an orbit around the centre rod. Also attached to this frame there is a second frame formed of two metal strips affixed parallel to one another to a metal frame with hooks on the top; these strips are cut at the ends with curves that match the external curves of the sun and moon models.

In the box, there is a gold-painted sphere on a brass cylindrical rod with a hole in the centre. This slots on the central rod as a model of the sun.

Also in the box, there is a 5″ diameter sphere, painted matte black, with a rod through the centre (to replace the Earth model); an additional rigid metal frame section formed of a circular section and a rectangular section; two identical semi-circular wireframes painted red; an L-shaped rod with a small blue ball at one end (possibly representing the moon), and a short length of string.

This model was designed to demonstrate the movement of the Earth, Sun and Moon system, and especially demonstrate how the relationship of the Sun and the Earth creates the seasons.

An advertisement for the instrument appearing in The Journal of Geography Vol. 14, 1915 (Issue 2) describes the various functions of the apparatus: “The Gardner Season Apparatus shows rotation and revolution of earth: comparative obliquity and intensity of sun’s rays at various latitudes: atmospheric absorption; varying lengths of day and night; reason for location of tropics and polar circles, the wire rays graphically determining these circles with chalk on a slated globe; also possible zones and climatic circles at various inclinations of axis; variation in time and direction of rising and setting sun through the year: varying duration of twilight at different altitudes and seasons: differing degrees of seasonal and diurnal changes for various angles of inclination of axis; or no inclination, no changes of season (inclination being changed by moving friction joint at center of base); perihelion and aphelion; relative sizes and distances of earth and sun; exceptional conditions of day and night within frigid. zone; with many other points.”

Good: The box is in good condition, although chipped and scraped in places. The pieces of wood forming the lid are slightly separated from one another. On the base, there is a crack through the length of the base of the box. The latches are slightly corroded. The interior of the box is dirty, but all the original wooden wedges appear to be in position. There is some damage where components have been inserted and removed.

The instrument is in fair condition. The wooden frame is mostly in very good condition, although there is some damage to the varnish in the centre of the frame where the wood has been chipped. The Sun model is scratched over most of its surface. The Earth model is scratched in places, especially in one location in the Pacific Ocean; this may be where, in storage, the loose globe has rubbed up against metal frame ends. The globe has been wrapped in tissue paper to further protect it.

The paint on the metal frames is dirty and chipped. However, there is little sign of corrosion underneath. Other metal components are in good condition, with only small signs of wear and corrosion generally over the surfaces. The black slate globe is in very good condition, with little signs of use, although the rod through the centre is oxidized. The length of the string is dirty, but not frayed.

An advertisement for the instrument can be found in The Journal of Geography Vol. 14, 1915 (Issue 2), appearing on page 6 of this document. [19/09/19]. This describes the instrument as “the only instrument having both map and slated earth globes mounted interchangeably in relation to sun rays and day circle” and “It is so clear that a child can understand, so accurate and complete that an educator finds instruction.”