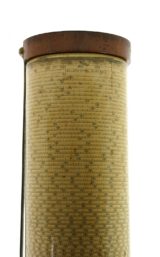 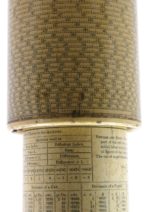 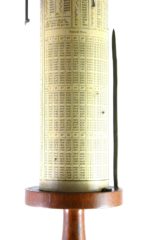 A spiral slide rule, with a 500-inch-long logarithmic scale. Kept in a box labelled “Calculator”, the spiral slide rule essentially consists of two cylinders on a wooden base around a metal cylindrical core. From the wooden base/handle a metal pointer rod emerges while from the wooden cap at the other end a metal scale protrudes. The outer cylinder containing the logarithmic scale is movable with respect to the metal scale. On the inner cylinder there is a plethora of information, including tables of natural sines; “Decimals” of a pound, shilling, acre, degree/hour, year, foot, and hundredweight (Cwt); trigonometric and spherical mathematical relations; properties of materials (including metals and types of trees); common conversions between units; and instructions on how to use the slide rule. Its model number is “4015” and serial number is “1376”.

Like all slide rules, logarithmic scales are used to facilitate calculations. The spiral logarithmic scale greatly increases the precision and computing power of the slide rule. In addition, its tables provide useful information to its users, most likely engineers.

Good: some minor taints on the fringes of the tables of the rule.

Fuller’s Spiral Slide Rule was designed by Prof. George Fuller of Queen’s College, Belfast in 1878 and patented as an “Improvement in Calculators” in 1879. Its remarkable length permitted a high level of precision in calculations; calculations could be made to 4 or 5 significant digits.

The principal manufacturer of these slide rules was W. F. Stanley Hall of London, who possessed the necessary dividing engine for such an undertaking.