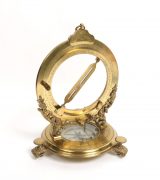 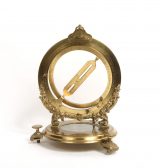 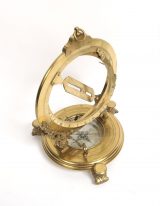 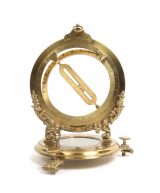 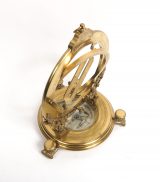 This is a instrument consisting of vertical rings mounted on a circular base. The base stands on a tripod of decorated feet, each of which has an adjustable screw knob through the centre which allows the instrument to be leveled. The circular base has a central circular window revealing a compass set in the base. This has a large central needle, a compass rose engraved on the base of the compass and is graduated on two levels around the rim with degrees–the top level sits at the level of the rotating needle. Set in the base of this there are two bubble levels filled with clear liquid arranged at right angles to one another.

Around the rim of the compass, engraved on the circular base, there are a series of circular scales. The innermost of these is divided into large sections labelled with months, the second divides each of these sections into 30 degrees, the third is divided non-linearly with numbers between 0 and 16. The fourth consists of large sections labelled “WATCH” “FASTER” “WATCH” “LOWER”. The fifth divides the circle into degrees labelled in quarters of a circle between 0 and 90°. Outside of there is a short and decorated length of scale with four graduations labelled in 15s. Affixed vertically to the base there is a small metal loop on a short vertical stand.

Oriented vertically and supported by an ornate floral stand on top of this base is a metal ring. In the centre of this there is a smaller ring that first inside the larger one. This is hinged at two points allowing it to pivot from alignment with the outer ring to being perpendicular with it. Metal brackets affixed to the external print prevent it from rotating further than this. On one side of the outer ring, there is a scale graduated in degrees, labelled in quarters of a circle. The inner rim on this side is divided into 24 sections, and labelled in semi-circles with roman numerals between I and XII. At the top and bottom of the ring, outside of the scale on the outer ring, there are small sections of Vernier. On the other side, both the inner and outer rings are engraved with the names of cities and their respective latitudes, for example: “Lisbon Lat 38°45′”. At the base of this side there is a knob emerging perpendicularly from the metal ring.

Running diagonally through the centre of the outer disk there is a metal plate with a rectangular cut-out in the centre. This is held in place at either end by metal pins that fit into brackets to the outer disk that allow the metal piece to rotate. On one side, the plate is engraved with a pair of non-linear scales, one above the other, and the names of months. On the other side, the top of the plate is engraved with two scales, again one atop the other, and at the top the letters “SD Æ ND” and along the base the symbols of the Greek zodiac. These symbols also appear on the lower scales.

Emerging perpendicularly in two places from the outer ring there are two short metal pieces, one of which has a hole in. At the top of the ring there is a protruding section with a metal loop attached.

Engraved just below the loop at the top of the outer ring: “Watkins & Smith
London”

This sundial can be used to find precise times using the sun. Sunlight coming through aperture on middle section falls on scale of hours. Instrument can be adjusted for latitude and date and oriented using the compass. Meridian point of the sun can also be determined through double aligned pinholes on attached to outer double ring.

This instrument was likely purchased as an antique by a member of the faculty at the University of Toronto Department of Astronomy and Astrophysics at the end of the 19th or beginning of the 20th century, likely as a display object. Since, it has been either on display at the department or in storage.