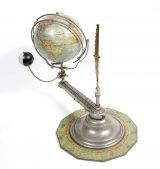 This is a mechanical demonstration model depicting the Earth, Moon & Sun system. The model stands on a heavy metal stand with a circular base. Around the rim of the base, the metal base is surrounded by a dodecagonal piece of wood with a paper scale affixed to its upper surface. On the outer edge, this is divided into twelve sections which show the names and images related to the twelve zodiac signs, with stars shown in the background. Inside these there are series of circular scales shown as concentric circles. The two rings directly inside the zodiac rings show the months and the days of the months. Inside this there is a ring showing the cardinal directions. Inside this, a scale graduated in degrees and labelled in four sections of 90 degrees.

Connected to the top of the centre of the metal base there is a metal arm with a decorative upper side. This rotates. Rising directly out of the centre of this, above the stand there is a rod which supports a gold-coloured metal piece cut with a jagged edge cut in a slightly curve on one side (this represents the sun). In the middle of this there is a horizontally oriented cylindrical piece with a hole through its centre. This rotates with the arm so the hole is always pointing outwards, to the model of the Earth.

The metal arm is about 30cm long. At the far end it broadens into a circular section. This supports a terrestrial globe, oriented vertically, that rotates on its axis. Supported by a metal arm over the top of the globe is a section formed of two rods curved to fit around the globe and running parallel to one another around three-quarters of the circumference of the globe. This can be tilted a few degrees, although is prevented from doing further by a metal pin. Connected to the north pole pin of the globe there is a arm that is curved over the surface of the globe from the north pole to just beyond the equator. This is engraved with a scale marked in tens from 0 to 80, beginning at the equator and ending near the north pole. Beneath the globe there is a small handle with a knob that enables the globe to be turned independently of the other apparatus.

Mounted below the scale on a geared apparatus is a curved metal arm. This supports a smaller ball, painted black on one hemisphere and white on the other, split on a vertical axis; this represents the moon. This is connected to the central rod that supports the earth globe, such that when the arm is rotated, the earth and moon both rotate in a realistic manner on their axes.

The surface of the terrestrial globe is formed from strips of paper that narrow to points at the top and bottom, fitted together to form a spherical image (gores). These a covered in a shiny surface. The globe is shown in colour, with blue bodies of water and countries shown in yellow, green, pink and orange. Bodies of water, countries, islands, continents and major cities are labelled. Wind directions and systems and water currents are shown with black arrows and red lines. Isothermal lines for June and January are shown as blue and red solid lines. The equator and ecliptic are shown as a black and white graduated line. An analemma is marked in the pacific ocean. Various keys and informational notes are included over the surface of the globe.

Printed on a cartouche on the globe: “8-INCH
GLOBE
MADE BY
WEBER-COSTELLO
CHICAGO HEIGHTS
ILLINOIS”

Molded into the upper side of the support arm: “ANDREWS”

This model is designed to demonstrate the movement of the Earth and the Moon around the Sun, and the intensity of the sun and related climate & weather effects on parts of the earth.

Very Good: The wooden border around the metal stand base is in good condition; the paper label is intact for the most part, with some damage at the corners but no significant peeling or scratches. It is very dirty. The metal of the stand and arm is in good condition, although marked with a few darker spotches and dots; there is one area on the arm marked with an orange material/stain. This is rust-coloured, by may not be rust, or may be very superficial. The brass section depicting the sun is in good condition, although the hole in the cylindrical indicates there may be a piece missing that was intended to fit in this (other examples suggest this may have been a ball like the one representing the moon.