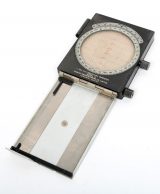 This is a metal instrument shaped like a rectangular box. On the top, it has a flat metal plate that is affixed to the box below by a hinge along one edge. When flapped down, this plate sits horizontally over the top of the box. On the plate, there is a circular metal disk with a non-linear scale around the rim, labelled in “Minutes” and “Km Minutes”. There is a circular scale on the metal plate around the edge of the disk; this is labelled in “True Alt.” “Miles” and “True A.S.”. On the interior of the disk, there are two arc-shaped holes each with short scales drawn on the disk above or below the arc. These scales permit conversion from “Air Temp. Centigrade” to “Ind. Height Thousand Feet” and the reverse.

This plate flaps up to reveal the rectangular box-shaped instrument underneath. It consists of a top metal plate with a circular hole in it. This is covered by a plastic window. Visible through the window there is a red grid pattern printed on a paper or fabric sheet. This can be moved up and down along its x-axis by turning a ridged knob on one side of the box. Around the edge of the window on a silver-coloured circular rim there is a scale graduated in degrees, and with cardinal directions indicated. This rim can be rotated by turning a ridged metal handle on one side of the box.

On one edge of this rotating disk, there is an arc-shaped section with a scale along the bottom edge, graduated in units from 0 in the centre to 40 on each side. One side of this is labelled “Drift Port Var. East” and the other “Var. West Drift Strbd”. In the centre of this arc, pointing towards the rotating circle there is an indicator arrow labelled “True Course”.

Attached to one side of the box there is a hollow cylindrical tube. On the underside of the flat top, there are two plastic rods for holding something flat.

On the rear, there are four round holes in the backplate. Through them, the internal rolling grid is visible.

Engraved and enamelled on the lid: “I.C.A.N.
CALIBRATION”

The Dalton Dead Reckoning Computer is a mechanical calculator designed to aid with flight planning, including (according to the Wikipedia page on the similar E6B) “fuel burn, wind correction, time en route, and other items.”

Very Good: The instrument’s surface shows some evidence of use; there are scratches and pencil marks on the top of the lid. The paint of the lower portion of the box is in very good condition; however, on the rear and knobs of the box, the paint is worn off.

The cardboard label usually found with the Dalton Computers is missing.

This artifact was purchased as surplus following WWII and may have been used for teaching at the Department for the Astronomy & Astrophysics or at the David Dunlap Observatory, possibly as a slide rule. If the former, it was probably moved at some point to the Observatory for storage. The sphere was kept at the David Dunlap Observatory until 2009. Upon the sale of the Observatory, it was moved to the University of Toronto’s Department of Astronomy & Astrophysics at the St George Campus. In 2017 it was moved to a new storage location in McLennan Physical Laboratories.