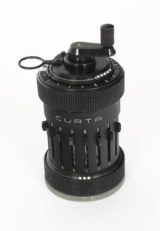 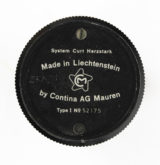 lej.54.1 The object is a black cylinder. On its sides, there are eight sliders, each with an digit above it; as the sliders are moved down, the number above will increase from zero to nine. There is also a ninth dial that has no digit. It has a double ended arrow next to it and can be adjusted to be in the up or down position. On the top of the cylinder is a series of digits, eleven of them overlaid on a black background, six on a grey background. A dial above the numbers can be spun. It can also be lifted out and spun. There is also a row of numbers printed below the top panel, and an arrow on the body of the cylinder; the top panel lifts up and can be turned so that the arrow points to a different number. Finally, there is a ring on a pivot that can swing and lock into place, and can be released with a button.

The object is in a black cylindrical case.

Acquired with the calculator is a small manual with a yellow cover called “Computing Examples for the CURTA Calculating Machine” (lej.54.2)

On the capsule:
“Curta
<-Open<-" "AUTOMATIC BUSINESS MACHINES LIMITED 15 Cromwell Road London S W 7 Telephone KENsington 8877" On the cylinder body: "CURTA" On the base: "Made in Liechtenstein by Contina AG Mauren Type I No. 52175" Scratched into the base: "2RX21" Inside the cover of the manual, in pencil: "Given to me by Helen M., at the request of Mat Mathews, who died in Ealing in Aug. 1987. THL."

Donated to UTSIC by Professor Emeritus Trevor Levere in 2012.

According to a note inside the cover of the manual, signed by “THL” (likely Trevor H. Levere), this calculator and manual was given to Levere by “Helen M. at the request of Mat Mathews who died in Ealing in Aug. 1987”.

The Curta Calculator was invented by Austrian Curt Herzstark while imprisoned in Buchenwald concentration camp. It was produced in Liechtenstein and sold worldwide from 1949 to 1973.