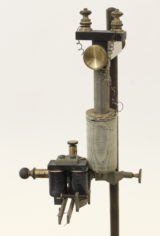 Five metal components are mounted on the wooden base. Two are mounted on the base itself and three are clamped to two vertical rods. Two of the components on the central rod are small electromagnetic coils. One component is an angled lever with a counterweight on one end and the “hammer” at the other. The fulcrum of the lever is fixed to one end of the wooden base. As the “hammer”, located at the end of the longer arm, is released by an electromagnet, it contacts two switches (an upper and lower contact), alternately opening and closing an electrical circuit, thus marking a set interval of time. The control time is varied by shifting a counterweight at the opposite end of the lever. There are two terminals attached to the front side of each end of the base.

Used to calibrate precision timing devices such as the Hipp Chronoscope. The Gravity Chronometer performed the same function.

Department of Psychology, University of Toronto

2) Stoelting, C. H. 1930. Apparatus, Tests and Supplies for Psychology, Psychometry, Psychotechnology, Psychiatry, Neurology, Anthropology, Phonetics, Physiology, and Pharmacology. Chicago, p. 77. For a similar instrument. Available from The Virtual Laboratory: Essays and Resources on the Experimentalization of Life (Max Planck Institute for the History of Science, Berlin)