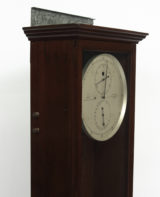 Inside the case, the clock instrument consists of a large silver-coloured metal face with a single hand in the centre; this dial is labeled in minutes, with “60” at the top. Inside the face of the larger dial there are two smaller dials, each with a single central hand. The upper dial measure seconds (0-60) and the lower 24 hours. There is a round hole in the seconds dial, just above where the hand is fixed. Also on the face, there is also a smaller round hole with a square peg in the centre of it. The clock mechanism is located behind the face.

A pendulum hangs below the face. This constists of a large vertical rod with a cylindrical weight fixed to the base. Hanging beside this, although detatched, there is a looped string with a metal pulley hanging loosely off it. Beneath the pendulum rod there is a small arced scale with 0 in the centre, and graduated in tenths on either side, labeled up to 2.

On a metal plaque affixed to the case behind the pendulum rod: “SIDEREAL TIME”

Astronomical chronometers are for the very precise measurement of time, used to located and time the position of celestial bodies.

Good: The case of the clock is in good condition, although dusty and dirty on the top. The metal plate affixed to the rear appears to be a modification. There is some label/tape residue on the door and side of the case about half way down. There are small chips and marks on the case, particularly on the corners and sides of the case. The top front left corner of the case is badly chipped and the wooden joins out of alignment.

The clock has been disassembled partly, but the mechanism appears to be present and intact. The string and pulley are hanging loosely in the case. The face is in excellent condition with few very minor marks; however, the serial number appears to be partly worn off.

The weights in the base of the box may not all be related to this instrument.

This instrument was used at the University of Toronto David Dunlap Observatory in Richmond Hill. Upon its closure and sale in 2009, the chronometer was moved to storage at the Department of Astronomy and Astrophysics at the St George Campus. In 2017, the object was moved to a new storage location in the McLennan Physical Laboratories.