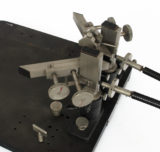 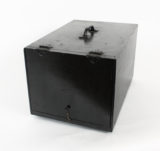 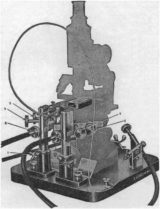 When it was used, the two metal pillars would have held microneedles or micropipettes in a clamps at their upper extremities. These glass elements were typically made in the laboratory from glass tubing drawn out into a fine tip. Screws on the pillars control the horizontal and vertical movement of these glass tools by forcing apart rigid bars held together at one end by spring plates (see Image 11.) Flexible shafts attach to the fine controls for the vertical axis, bringing the control closer to the operator and away from delicate moving parts.

Operation takes place within a glass “moist-chamber” held by a mechanical stage on the microscope stage. Material to be manipulated is suspended in (a) liquid droplets(s) on the underside of a coverslip which forms the ceiling of the moist chamber. Operation on cells takes place within the moist chamber, against the bottom surface of the coverslip. Images 12 and 13 show the instrument set up with one microneedle and one micropipette.

This instrument is missing a number of items that were originally purchased with it.

The Chambers Micromanipulator is a microscope stand that permits the manipulation of microneedles and/or micropipettes with a precision sufficient to perform microdissection of living cells.

Date of Manufacture: Unknown, after 1926.

This instrument was most likely acquired by the Department of Hygiene and Preventive Medicine of the University of Toronto School of Hygiene at some point between the late 1920s and the mid 1930s.

The 1978 catalogue indicates that this instrument was located at Parasitology and Microbiology in the Medical Building in 1980.It was later obtained by the Institute for the History and Philosophy of Science and Technology (IHPST.)

1) Chambers, R. “New apparatus and methods for the dissection and injection of living cells.” The Anatomical Record Vol. 24, No. 1, 1922.

An catalogue label from the original 1978 catalogue is kept in a small plastic bag under the same accession number. Original label reads: “MED199” and is stored on SS 601 7.D.5

The Chambers micromanipulator was created by Dr. Robert Chambers (1881-1957), an American biologist, while he was on the faculty of Cornell Medical College. It offered an improvement over several earlier instruments. It was developed with the assistance of the Cornell mechanician W. H. Farnham.[Chambers 1922, pp. 1-2] The instrument was afterwards produced and marketed by the E. Leitz company.

This particular instrument does not include the optional Leitz “micro-injection apparatus”, though, if it was used for microinjection, other solutions could have been used such as described in [Chambers, 1922, pp. 14-17.] this instrument has two micromanipulator pillars rather than one, suggesting that its operations were not limited to isolating single bacteria, for which only one pillar was necessary.