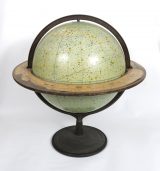 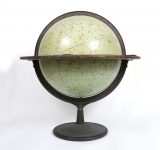 This is a large celestial globe on a round plastic base. The base is brown, with a black rim. The brown section of the base is mottled in texture. There is a central support, slightly narrower towards the top which supports a metal ring, the meridian, which runs all the way around the the globe. This is broader on the outside and on it the inside has a scale, graduated in degrees, shown in raised lines, on both sides. At the top of this ring is the word “LATITUDE”.

The globe itself is pale blue-green and covered with strips of paper narrower at the top and bottom (gores) fitted together to form a spherical image. The globe depicts the celestial sky, with stars depicted as black dots or star shapes; important stars are surrounded in yellow. Some constellations are outlined, former the structure of the constellation, and labelled in Latin. Some major stars are labelled. The celestial equator and ecliptic–which is labelled with zodiac constellations–are also shown as a thick, segmented line. The globe is covered with a regular grid; shown as slightly thicker lines are the equinoctial and solstitial colures.

At the top of the the globe there is a circular metal piece, a portion of which is inset from the rest. This is graduated into 24 portions and marked with the numbers 1 through 12 twice. One side is marked “A.M.” the other “P.M.”

On the paper scale affixed to the horizon band: “DENOYER-GEPPERT”

The surface of the globe is dirty, and marked, and its varnished surface somewhat cracked and damaged in places, revealing lighter coloured underneath. The paper gores are in good condition are fixed to the globe surface. There are some significant scratches and marks on the surface of the globe; however, these are all superficial.