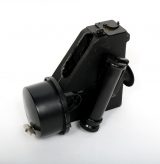 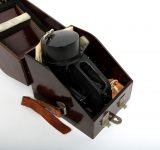 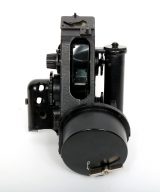 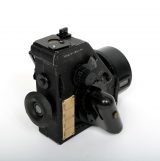 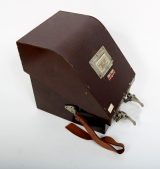 This object is contained in a dark red plastic box with a slanted lid, that is held closed with two metallic clips. There is a white plastic label on the box held in place by a metal frame. Also attached the box are three loops that enable the box to be hung on a wall hook in two different orientations.

The instrument itself is roughly the shape of a right-angle triangle, with an eyepiece on the one side through which a bubble is visible. On one side of this blocky triangle there is a plastic tube with an unscrewable cap and a notched wheel. At the front of the triangle there is a large round cylindrical piece on the front of which there is a rotating key and an indicator arrow, and on one side a window with rotating dial indicating numbers. Also attached to this there is a metal loop with a trigger-like latch. On the other side of the sextant there a number of knobs, indicators, and switches. These include: a rotating dial cut with holes of different aperture, a knob named “DEG.”, a switch marked “INCREASE” that alters other indicators on the instrument and a a flat beige plastic section divided into four section on which is written “OBJECT” “START” “FINISH” “ALTITUDE” for recording observations.

The object is open on the top along the slanted edge. Visible inside the object there is mounted a slanted mirror which diverts light into the instrument.

On the top of the object there is a metal hook onto which a metal clip is attached. Next to this, there is a circular glass window with a rotating cover which can be slid across the window to close or open it.

Inside the box there is also a cylindrical object wrapped in dark orange paper attached to purple textile-insulated wiring, a pair of papery cylinders and padding to protect the instrument. There are also two small sheets of paper with CALIBRATION SHEET written at the top. These are tucked together into a yellow envelope. Also in the box there is a portion of a torn cardboard tag with CALIBRATION written on it.

On a red sticky label above this:
“AVIATION ELECTRIC LIMITED
MONTREAL CANADA
REF. NO. 6B/133
DATE NOV57”

On a paper label also stuck to the box: “Ast60d”

Handwritten in pen on the envelope that holds the calibration sheets: “U/S
(Trigger)
Nov 9/73”

On the cardboard label, alongside calibration data: “Calibrated in Accordance With EO .70-45AA-3
CALIBRATION”

The Bubble Sextant enables stellar navigation in situations where a standard sextant cannot be used as the horizon may not be level, as in an aircraft. The bubble creates an artificial horizon when the sextant is held correctly.

Very Good: The box is in good condition, with scratches and marks across it, but otherwise in good condition except for some wear on the corners. The white label is loose in the metal frame that holds it. The leather strap has dried out and is broken at the metal piece that holds it to the box on one side; on the other side, a longer length remains.

The instrument is in good condition, although no bubble is visible. It is worn around the seams and edges. The cushioning material inside the box is very dirty, but in good condition. The cardboard label is torn approximately in half, with the other half and the top left corner missing. The paper labels are crumpled; one of these belongs to this sextant, the other does not.

The sextant was acquired by the Department of Astronomy or the David Dunlap Observatory sometime after 1957 (when it was last overhauled). Judging by the enveloped tucked inside it may have remained in use until at least 1973. This object was likely moved from the David Dunlap Observatory in Richmond Hill in 2008, upon the sale of the observatory. It was stored at the Department of Astronomy and Astrophysics until 2017, when it was moved to a new storage location in McLennan Physical Laboratories.