Box of Astronomical and Educational Slides 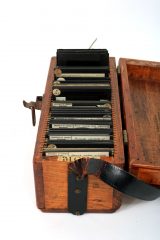 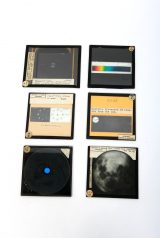 This object is a wooden rectangular box, with a hinged lid, designed to hold slides. It has a metal latch at the front, and a leather handle, adjustable with a belt, that stretches across the top of the box from one end to the other. There is a paper handwritten label affixed to the top of the box by a strip of clear tape.

The box contains 38 glass projector slides on mixed astronomical topics in 50 available slots. Most of the slides are roughly 8cm square; however, some are 10cm by 8cm. The slides appear to be a mixture of commercially produced and locally made and depict such subjects as explanatory diagrams of astronomical topics and photographs of astronomical subjects, such as planets and the moon. Some appear to have been taken by U of T students. Most are labelled by hand.

On the handwritten paper label on the lid: “TO DDO (with MR)
ANTIQUE SLIDE BOX WITH SOME ANTIQUE SLIDES FROM DEPT OF ASTRONOMY
IN (OLD) McLENNAN LAB BUILDING”

Stamped on the inside of the lid of the box: “DEPARTMENT OF ASTRONOMY
UNIVERSITY OF TORONTO”

On a paper label at one end of the box, next to the slides, “BEGIN”

All the slides are also labeled, many with dates, photographers, subject and other details such as manufacturer or source of the slide or image.

These glass slides are intended to be projected by a slide projector for an audience. Many of these slides are educational, and were likely used in an undergraduate educational context; however, it is not clear that this collection was assembled deliberately for a specific lecture or to teach on a specific collection. These slides may be a collection of slides saved from a larger collection.

Fair: The slide box is very worn. It is battered and chipped on all of its surfaces, but particularly on the bottom corners. However, the leather strap is intact. The metal of the hinges and latch is dulled and slightly corroded, but not significantly damaged. There is a splatter of white paint on the front of the box just above the latch. There are a few marks that indicate that stickers may have once been stuck to the box and then removed.

These slides were in use at the Department of Astronomy at the University of Toronto at the beginning of the 20th century. Many were created at that department. They were stored at the department until sometime after 1967 when they were moved to storage at the David Dunlap Observatory. They were kept at the Observatory until 2009 when upon the sale of the Observatory they were moved back to the University of Toronto’s Department of Astronomy & Astrophysics at the St George Campus. In 2017 they were moved to a new storage location in McLennan Physical Laboratories.