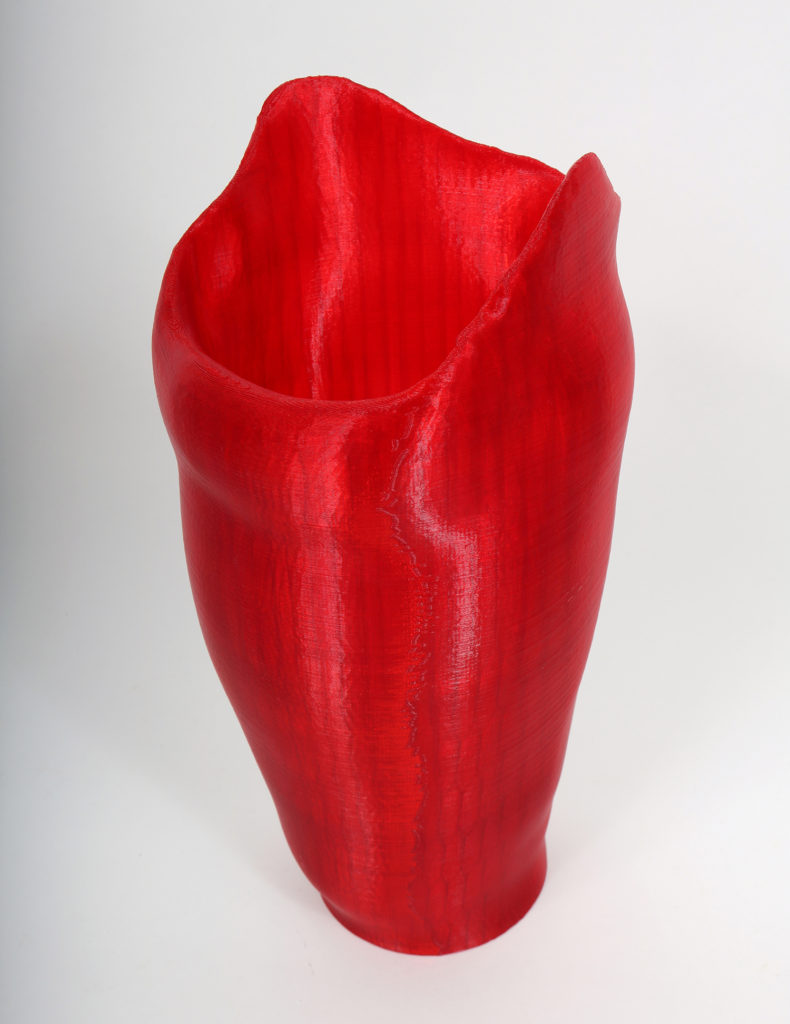 This is a below-the-knee socket for a prosthetic limb 3D printed using red PLA plastic. The material is semi-translucent and has a reflective surface. The bottom of the socket is flat, and the hallow interior is rounded, made custom to fit on an adult leg.

This piece was printed along with a series of tests for the 3D PrintAbility project (see additional information and references).

This model was acquired from the University of Toronto’s Critical Making Lab. The lab is housed in the Faculty of Information’s Semaphore research cluster, and directed by Matt Ratto.

As described on the project’s web page, 3D PrintAbility was a collaborative project aimed to bring affordable prosthetics to children in Uganda:

“For many, receiving a prosthetic limb is a difficult task, with cost and time being primary obstacles to proper fit and comfort. This problem is especially apparent in the developing world, where there are fewer trained prosthetists per patient than in elsewhere. This problem also disproportionately affects children, as their naturally high growth rate means they outgrow sockets within months. ”

PrintAbility is a project aimed at solving this problem, and works with children in Uganda. The goal of the project is to scan and 3D-print fully-customized and low-cost below-the-knee sockets for children at all stages in their development. In addition, the team worked with their collaborators, and with technicians in Uganda to bring and adapt 3D scanning and printing know-how to local settings. The process to create a prosthetic could be greatly reduced using this technology, as described in a Toronto Star article:

“First a prosthetic technician uses a device that looks like a staple gun to scan the limb. The data gathered is sent to a laptop with a graphic processor. A software program called Meshmixer, developed by University of Toronto PhD computer science student Ryan Schmidt, turns the 3D scanned data into something printable. The socket itself is designed in Meshmixer and the custom software developed by the team. Six to nine hours later, a socket — 3D-printed using a bioplastic, polylactic acid and designed specifically for the patient — is ready.”

The members of the lab associated with the project included Joshua Qua Hiansen, Kiah Bransch, ginger coons and
Matt Ratto. The project has been well received and was well featured in a number of publications and media outlets, including the Toronto Star, CBC, BBC, FastCompany, The Nature of Things.

The CBC article by Julia Burbee, covering the team’s first prosthetic made for a Ugandan woman, in February 2015, can be found here: http://www.cbc.ca/news/canada/toronto/canadian-team-uses-3d-printer-to-make-artificial-legs-for-ugandans-1.2953620 (accessed November 1st 2017)

The BBC report by Catherine Byaruhanga in February 2015 can be found here: http://www.bbc.com/news/av/health-31151088/prosthetic-limbs-made-by-3d-printers (accessed November 1st 2017)

There are also a number of posts on the Semaphore blog that cover the projects. They are linked to on the project web page: http://semaphore.utoronto.ca/projects.php?p=36 (accessed November 1st 2017)

The TedEx talk given by Matt Ratto on this project can be viewed here: http://semaphore.utoronto.ca/projects.php?p=36 (accessed November 1st 2017)

In March 2017, Ratto presented a report to the Canadian Senate entitled “Research Brief on Additive manufacturing and Healthcare, with a specific focus on the printing of custom medical devices”, for which a downloadable pdf can be found here: https://tspace.library.utoronto.ca/handle/1807/77986 (accessed November 1st 2017) 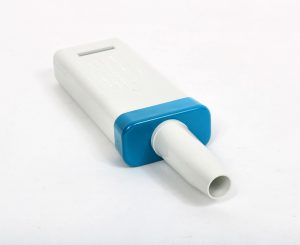 For several decades, the Institute for the History and Philosophy of Science and Technology (IHPST) was at the forefront of efforts to establish a science…