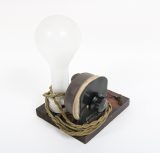 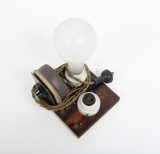 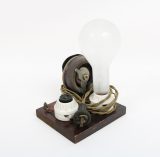 This object consists of a wooden base on top of which there is a lightbulb in a ceramic socket, a second ceramic with a two pronged plug in it, and a resistor-type object in one corner. A long electrical cable with a two-pronged plug at the end is attached.

The resistor consists of a doughnut shaped coil? mounted perpendicularly with an arm at the rear which contacts the exterior of the coil. This is rotated by means of a dial affixed to a plate on the other side of the coil. Written on this plate is: “OHMS 100 MAX. AMPS 1.22”. This transformer is connected via wires to the ceramic socket which supports a lightbulb upright. The lightbulb is quite large, and frosted.

Next to this, and also connected to other components via wires, there is a second ceramic lightbulb holder, which holds a two pronged plug that has been screwed into the place where the lighbulb would go. Two electrical terminals are located nearb

An electrical cable with yellow, red and green textile insulation emerges from behind the resistor and is wound around the instrument. At the end there is a plastic two pronged plug.

Printed on the front of the resistor, behind the plate: “CHICAGO OHMITE MFG. CO.”

This is one of several pieces of apparatus in the collection that demonstrates basic electrical circuit principles and features. This one may demonstrate the effect of increasing resistance on a circuit, with the effect visible in the change of the lightbulb.

Good: All the pieces of the apparatus appear to be present, although it is possible the plug in the lightbulb socket is not original. The wooden base is worn on the edges and corners and appears to have been reused as there are additional, unused holes and other marks ont he wood.

The resistor is in good condition, although the white front behind the dial plate is browned and dirty. The lightbulb is in good condition. The cables are frayed in at the ends and in one significant place in the middle, revealing black insulation underneath the fabric.