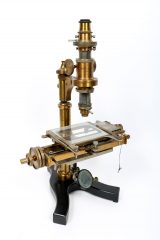 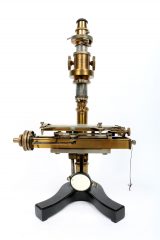 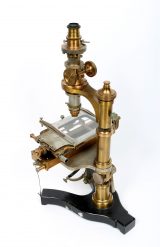 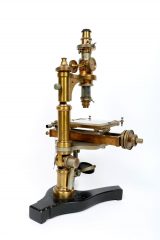 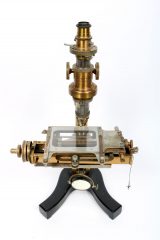 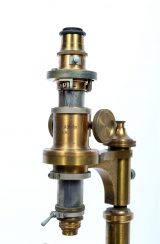 This object looks like a large brass microscope. It consists of a heavy black base with two feet. Rising from this there is a support cylindrical tube with several sections supporting two assemblies of instruments. This tube is hinged just below the stage; it can be tilted so the stage and lens tilts towards the viewer.

The stage of the microscope, mounted about a third of the way up the tube, consists of several layers: at the base, a flat metal support with an adjustable mirror attachment below it. Mounted directly on this, a rectangular box-type structure with a round hole cut in the base. This contains a smaller box which contains a screw which turned by a set of gears and graduated knobs. At the other end, the smaller box is attached to a string which emerges from a small hole in the end of this box. This large and smaller box arrangement serves as the ‘rail’ and ‘carriage’ which permits the assembly on top be moved left and right in very fine increments using the knobs. This top section includes the glass stage; here, two rotating flaps can be moved to hold a sample or slide; the glass in place can be slid out to permit another piece, such as a slide, to be slid in.

Mounted at the top of the support tube of the microscope directly over the stage there is a second cylindrical piece containing the lenses. This can be adjusted via a pair of large knobs on either side of the tube.

Engraved on the lens assembly of the instrument: “Otto Toepfer & Sohn
POTSDAM”

Engraved on the lens at the base of the lens assembly: “48mm Bausch & Lomb Optical Co.”

This artifact, essentially a specialised microscope, is designed to permit the precise measurement of samples or slides. It is very likely that it was used for the analysis of spectroscopic images.

From the Department of Astronomy & Astrophysics catalogue:
“A chief use of this device was to measure the position (and width) of the lines in stellar spectra, for purposes of radial velocity work. Radial velocity is the movement of a celestial objects along the observer’s line of sight, either approaching or receding from the observer. If a star is approaching, the Doppler Effect causes the wavelengths of elemental lines to shift quantifiably towards the blue end of the electromagnetic spectrum, and if a star is receding the lines appear to shift towards the red end of the spectrum. This allows the velocity of a star to be determined relative to the observer or another frame of reference. Programs amassing stellar radial velocities were important for statistically exploring galactic dynamics, morphology, stellar pulsation and atmospheres, and the orbits of spectroscopic binary stars (technical innovations over the last thirty years have rendered radial-velocity detection a leading technique for exoplanet discovery). Similar instruments to the Toepfer were used at observatories from ca. 1900-1965, concurrently with the introduction of ever more sophisticated measuring machines.”

Very Good: This instrument is in very good condition. In places, its metallic surfaces are scratched and corroded, but on the whole the metal is on good condition. Exceptions include the flaps designed to hold the slide in place, and the arm which permits the tilting of the microscope, which are more badly corroded. The mirror at the base is cracked across one side and somewhat scratched and corroded.

Most of the parts of the instrument are present, including all the lenses. The string emerging from the sliding carriage is not attached to anything.

This instrument was acquired for astronomical work at the University of Toronto by Professor C.A. Chant at the beginning of the 20th century. It may have been used into the 1930s, and may therefore have been used at the David Dunlap Observatory. If so, it was stored there until 2009, when the Observatory was closed, when it would have been moved to the Department of Astronomy & Astrophysics at the U of T St George Campus. It was stored here until 2017, when it was moved to a new storage location in McLennan Physical Laboratories.

Research on the provenance of 2014.ast.33 has produced some convincing leads. There were several known Toepfer & Sohn plate measuring microscopes in southern Ontario contemporaneous with 2014.ast.33.

Possibly 2014.ast.33 is the Toepfer plate measuring microscope described by Klaus Hentschel in Mapping the Spectrum (2002). According to Hentschel, “by 1910, the physics department [at University of Toronto] has obtained a Toepfer measuring microscope for measuring spectrograms” (129). The University of Toronto Report to the Board of Governor’s around this time lists a $202.49 expense in the year ending June 30, 1909 for “Otto Toepfer & Sohn, apparatus” in the building and equipment expenses for the sub-department of Astronomy and Astrophysics. There is also correspondence between Clarence Chant, professor of astronomy, and F. A. Moure, Esq., the University of Toronto bursar, dated May 5, 1909, in which Chant lists the sub-department’s equipment and value. This list includes a “measuring microscope” with a value of $250.

Though the early department of astronomy and astrophysics was closely connected to the Royal Astronomical Society of Canada, a description of RASC equipment in 1902/1903 by an anonymous member does not include a plate measuring machine.

2014.ast.33 is almost certainly not either of the Toepfer & Sohn measuring microscopes used at the Dominion Observatory in Ottawa after 1906. One of these is described in J. S. Plaskett’s Report of the Chief Astronomer Appendix No. 2 Observatory Instruments and Astrophysical Work (1906). Plaskett’s report includes a photograph and elaborate description of the Dominion Observatory measuring microscope. The instrument in Plaskett’s photograph has an similar base, and a different arm and specimen stage.

A Toronto Star photograph taken at the David Dunlap Observatory in December 1935 includes a caption identifying Mary Northcott using a Toepfer measuring engine. The engine in the photo is extremely similar to 2014.ast.33. The photo is also included in an album of Dunlap Observatory photos in the University of Toronto archives.