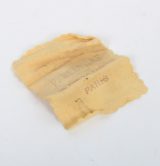 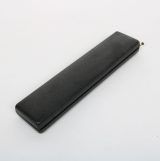 2014.ast.26.1 This is a silver item in a long rectangular black box lined with red velvet. The exterior of the box is black with a leather finish. There is a small pin at one end; pulling this pinout a short distance releases the box latch and allows the box to be opened.

The instrument is silver coloured and consists of a long, extendable rod with a clamp attachment at one end that can be tightened by turning a ridged knob. Various knobs along the rod allow it to be fixed into place. At the other end of the rod to the clamp, there is an arm attached via a rotating knob. This arm has a black section in which there is fixed a very small prism. The black section has slots into which small lenses can be inserted and held in place by tightening a knob.

Also in the box are twelve small rectangular lenses, each with an individual velvet slot for storage. Each of these has a small number 1-12 engraved on it. Tucked underneath the prism end of the rod there is a soft chamois cloth.

2014.ast.26.2 With the box, there is a handbook providing instruction, in French, on how to use the instrument.

Stamped in gold on the underside of the lid: “P. BERVILLE
PARIS”

The cover of the instruction booklet says that the camera lucida, which is Latin for ‘light chamber’, is “a device that allows to reduce, enlarge, copy landscapes, portraits, documents, objects, etc.” as per translation. As per the images in the booklet, this camera lucida has an important portable function with an attached table clamp for versatility. Its exact use for astronomy is unknown, yet it is a useful optical device to aid artists and scientists in ‘realistic’ drawings prior to the mainstream adoption of photography. Presumably, it allowed an astronomer to sketch figures/models of celestial objects. By choosing the appropriate concave or convex lens, the object being transcribed is enlarged/reduced/reflected through a superimposition on the drawing surface – thus, enabling the user to see both the object/scene and the drawing surface at once.

Excellent: The box is slightly dusty but is in excellent condition. The instrument appears unused and is in perfect condition. All the components are present.

This item does not appear used. This item was likely kept in storage at the David Dunlap Observatory in Richmond Hill until the sale of the Observatory in 20009. Then it was moved to the University of Toronto’s Department of Astronomy & Astrophysics at the St George Campus. In 2017 it was moved to a new storage location in McLennan Physical Laboratories.

There are extensive images/information on camera lucidas and this particular version on the Internet. The following are references utilized as well as links to identical/similar objects elsewhere, and even containing photos of the object in use / the image vis-à-vis the lens: