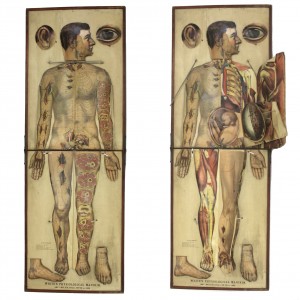 Designed in the late 19th century, White’s Physiological Manikin revealed the secrets of the human body one flap at a time. As a life-size visual encyclopaedia, White’s Manikin shows anatomical structure, surgical techniques, and even prenatal development despite the sex of the Manikin being male.

This particular manikin was used by the anaesthesiologist Dr. Kneeshaw of St. Joseph’s Hospital, who received it in 1940 during his medical education.