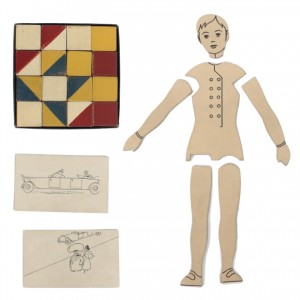 The first psychology laboratory in Canada was created in 1891 at the University of Toronto, under the direction of the well-known psychologist James Baldwin. It was housed on the first floor of the University College building.

This lab was part of the new and growing field of experimental psychology, whose practitioners sought to make the study of the mind and consciousness more scientific. Its creation, however, was not without controversy. Opposition came from philosophers who thought the study of the mind was not something that could be modeled after the physical sciences. But by 1926, the discipline of psychology had become widely accepted enough to merit its own independent department, created under the head of Edward Alexander Bott.

The collection of psychological tests here represents some of the experiments and tests that were conducted during the history of Unipsychological testing, both in North America and Europe. The need to sort soldiers to the most appropriate positions led to the creation of many of the intelligence and personality tests on display here.These tests assess a range of psychological traits, from general intelligence to juvenile delinquency. They are also examples of the visual and aesthetic appeal that such tests can have; the Rorschach tests in particular have become iconic images in popular culture.

Healy Pictorial Completion Test
These lively cartoon woodblock images were intentionally created so that certain parts of the scene are missing. Children taking the test selected a woodblock to complete the picture. The test was created by William Healy in 1919 as a simpler and more accurate method to test for juvenile delinquency than the standard psychological tests on [Read More...]

Test for Color Blindness
This colourful collection of wool samples was used to test for colour blindness. First created by the Swedish physiologist Alaric Holmgreen out of his research on vision, several versions of the test were soon marketed by companies around the world.

Rorschach Test Slides
What images do you see in the inkblots? Psychologists used these visually stimulating images to assess individual personality traits and mental illness. Patients would be asked to describe what they saw in the ambiguous image, and their responses were assessed against typical responses.

Wechsler-Bellevue Test
This test was created as an alternative to the Stanford-Binet, which David Wechsler thought was inappropriate and inaccurate for testing adult intelligence. Rather than assign a “mental age” to the test-taker, the W-B introduced multiple scoring factors that allowed psychologists to subdivide an individual’s intelligence score. It remains one of the most widely-used IQ tests.

Revised Stanford-Binet Test
This is an example of the first major intelligence test. It was initially developed during World War I by an American psychologist, Lewis Terman, for testing military recruits. Later, it would be used in schools to test children for learning disabilities. This kit contains both text-based questions and answers, as well as objects, picture cards, [Read More...]