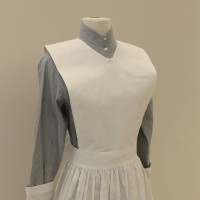 Modern nurses uniforms have evolved significantly from their early precursors. Uniforms (a) and (b) were worn by students between the 1880‘s and the 1970‘s at the Toronto General Hospital School of Nursing. Established in 1881, this school was one of many that were established in hospitals during the late 19th century.

Uniforms for students differed between hospitals, and served a number of functions. Aprons could be easily removed and sanitized, and caps kept hair covered and out of the way. Full sleeves and skirts served to maintain an appearance of modesty, which was important in an occupation which required young women to come into contact with patients’ bodies.

Uniforms also made nurses instantly recognizable in institutions that were becoming increasingly populated with patients, physicians, and other staff. Uniforms of different colours and patterns distinguished student nurses from graduates, who traditionally wore white. Graduates could also be identified by a black band on their caps.

In the 1970’s, nursing education was relocated from hospital-based schools to universities and community colleges, and scrubs began to replace uniforms as standard nurse’s attire.

Nurse Cape (Mid-20th Century)
This cape, which dates from the 1940’s, would have been worn over a uniform when travelling or when working outside or in cold conditions. Source: Canadian Museum of Civilization

Nurse Uniform (Late 20th Century)
This uniform was introduced in 1974, when the George Brown College Faculty of Nursing took over from the TGH School of Nursing. Source: Canadian Museum of Civilization

Nurse Uniform (Early 20th Century)
This blue uniform, which replaced an earlier brown one, was used between the 1894-1943. Source: Canadian Museum of Civilization

Nurse Uniform (Late 19th Century)
This uniform was in use in the early years of the TGH School of Nursing, between 1881-1894. Source: Canadian Museum of Civilization