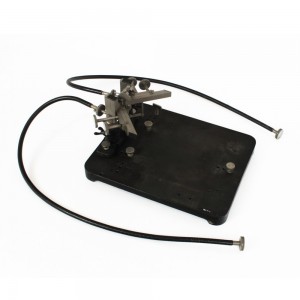 A micromanipulator is an instrument that makes it possible to manipulate objects at the limits of optical magnification. The American biologist Robert Chambers (1881-1957) first described his instrument in 1918. The ability to manipulate living single-celled organisms and tissue cells–to dissect them, to inject and remove material, and otherwise experiment, greatly advanced the understanding of cell structure and function.

In this instrument, cells are held in a droplet of liquid suspended from the roof of a glass chamber on the microscope stage. By turning several knobs, the operator controls the movement of the tips of glass microtools, bringing them into contact with a cell under magnification.

The Chambers’ Micromanipulator required a great deal of time and skill to operate. This was especially true of the microinjection system which was used for injecting, or removing liquid from, a living cell for experimental purposes.

This instrument was purchased by the University of Toronto’s School of Hygiene, between the late 1920s and early 1930s. A number of parts have been recreated for this display in order to show the instrument as it might have been looked when it was originally used.