The University of Toronto acoustics collection consists of a comprehensive series of instruments made in the Parisian workshop of Rudolph Koenig (1832-1901). Koenig was both an innovative instrument maker, prolific experimenter, and a major influence in the founding of modern experimental acoustics in physics and psychology. His work straddled artisanal traditions in musical instrument making with the precision traditions of the Parisian scientific instrument trade.

This collection includes instruments ranging from the standard teaching instruments to one-of-a-kind research instruments. There are instruments that illustrate the standard text-book approach to nineteenth-century acoustics; There are the key instruments that demonstrated the work of Hermann von Helmholtz (1821 -1894) such as the Koenig sound analyser, the double siren, and the vowel synthesiser; there are arrays of highly- specialised, precision tuning forks made to test and demonstrate combination tones, a source of controversy between Koenig and Helmholtz. Overall, the collection provides a window into Koenig’s workshop, which served as a meeting place and exchange of artisanal traditions, disciplines, varied scientific ideas, and practices.

In 1878, James Loudon (1841-1916) travelled to Europe with $12,000 from the Province of Ontario to spend on fine instruments to equip the physics laboratories (Pantalony, 119). This was the first physical teaching laboratory in Canada. Loudon had been appointed Professor of Physics and Mathematics in  1875. As a professor, he had established himself as an advocate of the German model of university-based laboratory research. He was a proponent of the School of Practical Science, which opened in 1878. Although physics teaching at U of T was always intended by Loudon to be intellectually separate from the School, his practical physics teaching vision was part of the same campaign to bring the German model to Toronto.

Rudolph Koenig’s workshop was a primary destination for Loudon’s European shopping trip. Over this and subsequent visits between Europe and North America, Koenig and Loudon became friends and collaborators. Loudon was President of the University of Toronto between 1892 and 1906 –a role that permitted him to patronize his friend Koenig through the purchase of his instruments. Meanwhile, Koenig acted as a broker for the U of T’s European purchases, recommending instruments available from other Parisian makers including Carpentier and Golaz.

Many of the U of T’s Koenig instruments show signs of significant use over many decades of teaching. In contrast, some were used very rarely or only for demonstration, due to a lack of local expertise; as a result, these are in excellent condition. A few instruments were used by the teaching laboratories of the Department of Physics into the 21st century.  In the 1970s, an interactive display of Koenig instruments was set up on the ground floor wing of the McLennan Physics building. This remained in place until 2013, when they were transferred to the University of Toronto artifact collection. Other Koenig artifacts were gathered from the Department of Physics teaching laboratories around this period.

Important themes reflected in the Koenig collection include:

Exchange of objects between North America and Europe: When these instruments were acquired, Paris was a major centre for the manufacture of scientific instruments. Newer centres in Germany and the United States were then emerging and would soon eclipse Paris. University collections–especially those of newly-founded laboratories in North America–provide a record of the important centres of manufacture since they tended to collect prestigious instruments.

Traditional materials and craft traditions: Koenig trained as a luthier before entering the field of scientific instrument making. His instruments, largely made of wood and brass, embody traditional skills and longstanding standards of artisanal work. This form of commercial manufacture would soon give way to newer industrial forms of manufacture using a new generation of materials.

Early science education and public outreach at the University of Toronto: While a number of the instruments in this collection were developed for acoustical research, most were used for teaching purposes. A subset of instruments, notably including the large tuning forks, were used by Koenig and Loudon in a series of public lectures on scientific acoustics to a Toronto audience in 1881.

Acoustical research in the nineteenth century: The instruments within the Koenig represent the cutting edge of experimental research in the field of acoustics. Particular instruments represent a variety of acoustical phenomena and experimental approaches including the acoustical interference and beat tones, the visualization of sound waves, and the combination of pure tones to produce complex sounds.

Highlights of the University of Toronto’s Koenig Collection include the instruments below. Some of these have been filmed in operation. Links to online videos are provided.

The Koenig Analyser: Koenig’s flame analyser was, next to the sound synthesiser, one of the clearest expressions of Hermann von Helmholtz’s theory that complex sounds were made up of a spectrum of elemental or pure tones. The adjustable resonators covering a range of 65 notes from sol1 to mi5 (96–1,280 Hz), could each be rendered visible with a connection to a manometric flame capsule. The resonators connected to a gas-filled capsule with a rubber tube. If activated, the distinctive pattern would appear in the rotating mirror. A human voice, for example, would activate a series of capsules revealing its rich harmonic structure. A tuning fork, representing a pure, elemental tone, would only activate one resonator and capsule. Koenig invented this analyser for his vowel studies between 1865 and 1872. It was flexible with a wide range compared to the earlier model with eight fixed resonators (CR no. 242a).

The Double Siren: The double siren was one of Koenig’s more popular instruments. It consisted of two “polyphonic” or “multivoiced” sirens with more than one series of holes, and was an invention of the German physicist and former teacher of Hermann von Helmholtz, Heinrich Wilhelm Dove (1803–1879). It produced several pure tones simultaneously, in musical chords, and under greater pressure. It was ideal for demonstrating interference effects (when sound waves combined to amplify or diminish each other) and combination tones). [Pantalony 2009, 184-185] 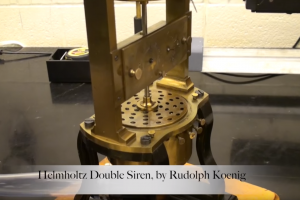 The Helmholtz Synthesizer: The sound synthesiser was Helmholtz’s clearest instrumental expression of his theory of timbre, or sound quality. Whereas his spherical resonators dissected compound sounds (vowels or musical sounds) into elemental frequencies, the synthesiser did this by building up complex sounds from simple frequencies. In 1857 he went to the instrument maker Friedrich Fessel of Cologne to turn this idea into reality. The initial instruments used a combination of electrically driven tuning forks, resonators and piano keys to synthesise compound sounds. When the system was on, all of the forks would vibrate in series. To activate a sound, however, one needed to press an ivory piano which moved a circular lid away from the opening of the resonators thus activating the sound. [Pantalony 2009, 217] 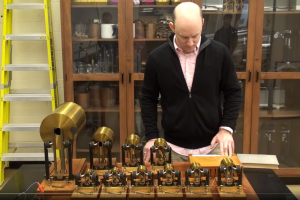 Series of Tuning forks: This specific array of precision tuning forks are highly-specialized experimental forks that relate directly to Koenig’s long-standing disagreement with Helmholtz on the nature of combination tones. Some of them date back to Koenig’s display at the 1876 Philadelphia exposition. 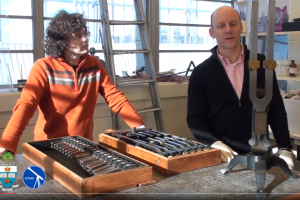