From the late 18th to early 20th centuries medical researchers became increasingly interested in the use of electricity as a tool of medicine. Instruments like the galvanometer and the chemical battery produced remarkable interest and optimism among medical professionals for applying electricity to health and medicine. Meanwhile electricity took hold of the popular imagination as new technologies such as the electric light, the telegraph, and the electric streetcar entered daily life.

Over the first half of the 20th century, practical medical technologies began to emerge from this period of early enthusiasm.

No. 4. D. D. Home Electrical Apparatus
This medical device supplied ‘Galvanic’ (direct) current from a dry-cell battery. It was a low-end product for use in the home. The purchaser received 90-page booklet with instructions for treating one hundred diseases. The large number of surviving examples suggests that this item was quite popular among self-treating patients at this time. c. 1890

Sanborn Cardiette Portable ECG Machine
This battery-powered ECG machine registers the electrical activity of the heart. Its widespread availability gave clinicians a powerful tool for diagnosing cardiac heart disease. It was used by several generations of local physicians. The ECG machine, like the x-ray machine, and instruments for electrocautery, was a successful technology that evolved from earlier machines used for [Read More...] 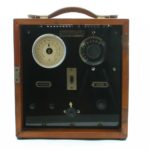 Wappler Electro Medical Apparatus
This American-built therapeutic device delivered a high-frequency electrical current to the body. Following the discovery by 19th century researchers that powerful high frequency currents could pass safely through the body, physicians and other healers applied such devices to treat ailments that ranged from obesity to epilepsy to tuberculosis. c. 1920

The Curative Powers of Electricity Demonstrated
This pamphlet, extolling the medical virtues of electricity, was produced by the Toronto  Medical and Electro Therapeutic Institute in 1877. In 1876, Jenny K. Trout, M. D. (1840-1921), Ontario`s first licensed female physician, opened the Toronto Electro-Therapeutic and Medical Institute along with Emily Amelia Tefft. At its height, 60 live-in female patients were treated using [Read More...]