3D Printing at the Critical Making Lab: The Thing-O-Matic Makerbot 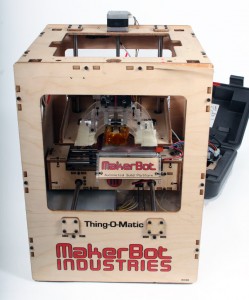 The Thing-O-Matic Makerbot was the first 3D printing machine used at the  Critical Making Lab, and with which the question of commercially available digital material production was explored. Released in 2010 by New-York based Makerbot, the Thing-O-Matic came as an open-source hardware kit. This one was assembled by Gabby Resch, a PhD student and member of the Critical Making Lab, and used mostly for demonstration purposes. It provided researchers and their audiences an introduction to 3D printing, and to the use of related equipment. In an interview, Resch recalls bringing the Thing-O-Matic to libraries, and using it to talk about 3D printing with various groups of kids, curious, and sometimes skeptical, about this technology.  At this time, he noted that 3D printing was starting to become an important element of ‘digital literacy’ in library programs:

I used to take this around to a lot of events around the city, particularly events with kids…and events at libraries, because libraries, especially in 2010-2011 were being told ‘oh, you all need 3D printers.’ A lot of libraries were being told “hey, if you want to stay relevant you need to be teaching digital literacy and one of those digital literacy skills is understanding things like 3D printers.” (Resch)

Hear more of what Gabby had to say about 3D printing at the Critical Making Lab in this interview. 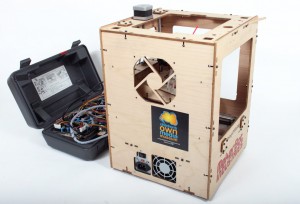 While the emergence of a mass market for 3D printing may have brought along certain ideals of automated production and self-replicating machines, the reality of it, still today, is far from it. 3D printing is a technological craft requiring various forms of human powered assembly, problem solving and troubleshooting. Perhaps the most recognizable unique feature of this particular machine is its electronics board, customized into a separate accessible case. 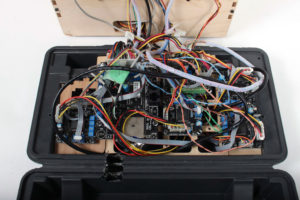 The original instructions for the kit included the electronics tucked underneath the machine, at the bottom of its wooden encasing. While this may have allowed for a compact, neat assembly, it reduced accessibility to electronic components which proved to be too inconvenient for troubleshooting – something that, according to Gabby, had to be done a lot while operating this machine. So, by taking a tool case and laser cutting recycled pieces of wood for supports, he was able to customize the unit in a way that not only made troubleshooting easier, but also possible to do while operating the printer. Even more, having the electronics encased in such a way had a representational advantage well suited for discussions of digital-material convergence.

3D printers can be found in many places today: digital innovation hubs in public libraries, maker spaces, fab labs, hack labs, workplaces, and in the homes of technological enthusiasts and hobbyists alike. While 3D printing as an industrial technology has existed for much longer, 3D printers, as affordable desktop consumer products, emerged only in the last decade. At the University of Bath, Adrian Bowler started work in 2005 on the Rep Rap project – an open-source hardware project to create a 3D printer which could “self-replicate” itself (while Rep Raps do not, as per say, autonomously replicate themselves, all of their parts can by principle be printed with the printer itself). “Darwin”, the first model, was made available in 2007, and was followed by other models such as “Mendel”, “Huxley” and “Prusa”, all freely shared among a community of 3D printer builders and users, who in turn created numerous variants of these models. Indeed, Rep Rap 3D printers became popular in grassroots “maker” communities, and have close ties to the emergence of the Makerbot brand. 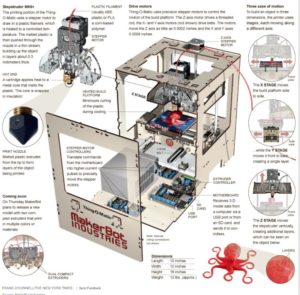 The Thing-O-Matic in the New York Times

Makerbot was founded in 2009 by two co-founders of the NYC Resistor Hackerspace, Bre Pettis and Zach Smith, along with Adam Mayer – all of whom were very involved in this “maker” community. The launch of the company, and release of the CupCake CNC assembly (their first model, available as a kit to assemble) owed some of its financial support to RepRap’s Bowler, and his wife. The release of the Thing-O-Matic followed in 2010, and this model became available both as a kit and as a pre-assembled 3D printer. By 2011, it had become somewhat of an icon of the “maker community” and the popularization of 3D printing. It appeared in publications such as Rolling Stone (Shafrir), and the New York Times (O’Connor).

Makerbot’s Thing-O-Matic was succeeded by the Replicator, and the Replicator 2, both released in 2012. The Replicator 2 however, unlike the original Replicator and previous Makerbot builds, was not open-source. This change occurred shortly after “Tangibot” emerged – a Kickstarter campaign selling a replica of the Replicator, outsourced for a lower cost. As noted by Zaleski in his article “The 3D Printing Revolution That Wasn’t”, the Tangibot never came to fruition, but it marked an important turning point in Makerbot’s company history:

Although the Kickstarter campaign failed, the experience caused Pettis to rethink his commitment to being open source. […] When the Replicator 2 came out in September, parts of the machine were closed off. The black metal frame was proprietary, as was the graphical user interface that sits on top of the 3D printing software on a user’s computer. These changes may seem like minor pivots, but MakerBot caught flak from the open source community. One former employee said some people were “outraged.” The fixes and improvements they had contributed over the years — for free — were now locked inside MakerBot. (Zaleski)

In 2013 Makerbot was then acquired by Stratysis – the manufacturer of 3D printing equipment and systems – and their business model has continued as proprietary, to the dismay of the many early contributors making the early founding community of the company.

3D Printing at the Critical Making Lab, and related objects in our collection 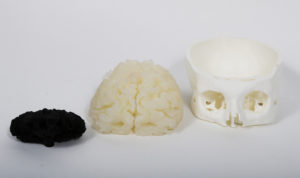 A skull and brain assembly model 3D printed at the lab

The Critical Making Lab –a space filled with all sorts of gadgets and curiosities; a fleet of 3D printers, 3D printed limbs and medical models, laser cutters, scanners, an array of electronic components and project scraps -is part of the Semaphore Research Cluster at the University of Toronto Faculty of Information (iSchool).  At the lab, 3D printing has been a crucial tool for a number of specific undertakings, including the making of anatomical models and affordable prosthetic limbs, but researchers engage in technological tinkering through a range of hands-on projects, and using a wide variety of computer-based technology.

The critical making laboratory is a shared space for opening up the practice of experimentation with embedded and material digital technology to students and faculty in the Faculty of Information. The lab provides tools, materials, and training for building devices such as wearable computers, RFID systems, ubiquitous computing networks, and other physical computing technologies. However, while the critical making lab organizes its efforts around the making of material objects, devices themselves are not the ultimate goal. Instead, through the sharing of results and an ongoing critical analysis of materials, designs, and outcomes, the lab participants together perform a practice-based engagement with the pragmatic and theoretical issues around information and information technology. (Critical Making Lab) 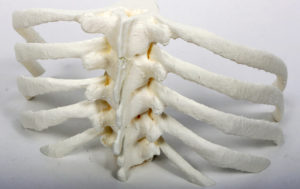 3D printing, and other forms of digital production, are used in research here to engage in ‘making’ as a reflexive activity. Through hands-on experimentation with specific technologies, many questions arise, which bring to attention, and may pose challenges for, broader theoretical and socio-cultural conceptions of technology. Working in areas of inquiry which overlap into computer science, information studies, museum studies, and science and technology studies (STS), researchers at the lab engage in critical thinking through making – thus in ‘critical making‘. 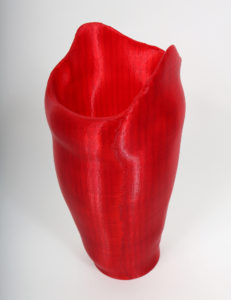 The Critical Making Lab emerged from the work of Matt Ratto, whose writings have dealt with a range of topics relating to digital production, ‘making’ and social engagement. In a 2010 knowledge synthesis report, Ratto and Robert Ree discussed 3D printing as a “lead indicator” towards the materialization of digital information, and what they refer to as an emerging ‘digital economy’.