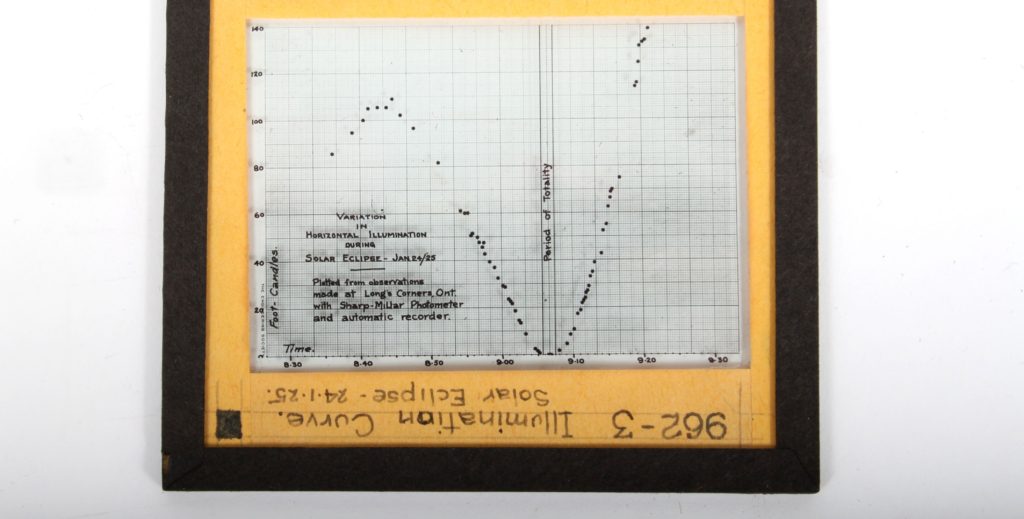 Today, August 21st 2017, the total eclipse of the sun is missing Toronto by a very wide margin, but in January 1925 excited Torontonians gathered to watch the totality in their own backyards. A small contingent of scientists from the University of Toronto and the Dominion Observatory in Ottawa travelled to the nearest accessible centre of the totality—a crossroads called Long’s Corners, Ontario. Among them was a young sessional lecturer, Kenneth Bell Jackson. Some of the observations were a washout: the cloud cover was very thick and astronomers hoping to repeat the observations that had confirmed Einstein’s Special Theory of Relativity just a few years earlier were denied the opportunity. Jackson and his colleagues from Engineering Physics, however, had other expectations: Using a photometer, these scientists recorded the changes in illumination as the eclipse approached, and during totality. Later, Jackson produced these slides from the data collected. Signed by Jackson, they were stored by him throughout his career inside the same photometer he used that day, a personal memorandum of Toronto’s 1925 Eclipse. 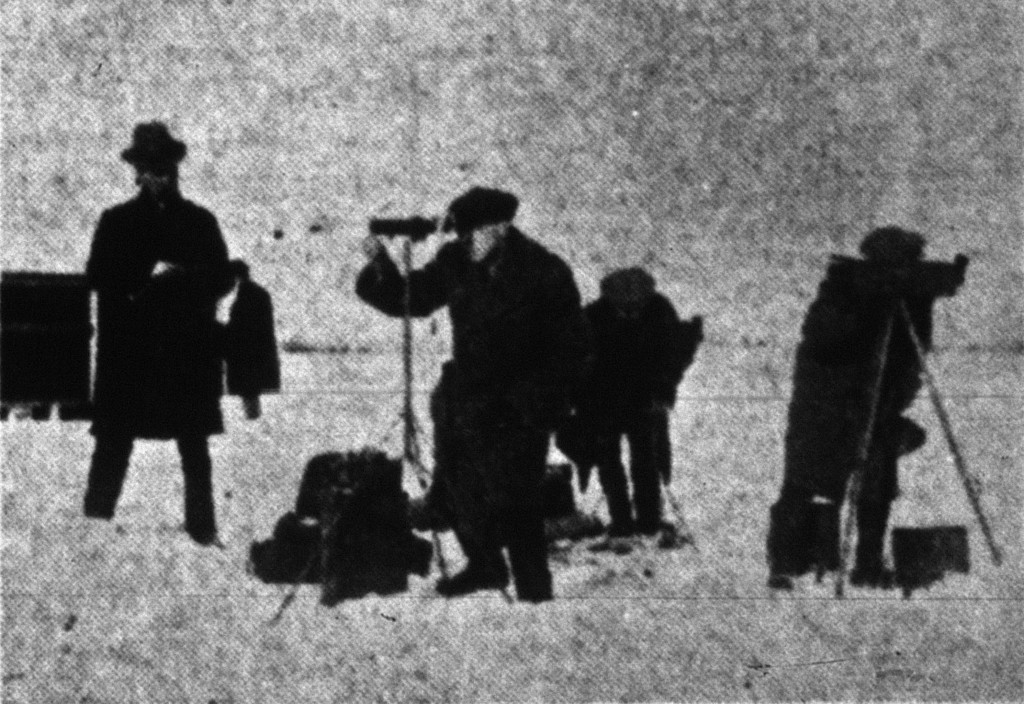 The excitement in Toronto surrounding the 1925 eclipse was similar to the 2017 eclipse: it was a public spectacle many people were eager to partake in, and an opportunity for scientists and enthusiasts to make observations unique to a total eclipse of the sun. On the morning of the 24th, despite thick clouds, hopeful Torontonians gathered in snowy weather to observe the eclipse. “Toronto Folk, Assembled in Hushed Expectancy, Catch But Fleeting Glimpse of Tremendous Drama Enacted in Measureless Realms of Space”, the Globe reported on the 26th, although only the totality was visible: “Well-known landmarks became indistinct, as steadily and surely came the darkness…”

Elsewhere, the non-appearance of the eclipse caused more mirth. On the university campus, the eclipse was reported somewhat differently: “Prima Donna Helio Solus cancelled her engagement with the university Saturday morning after a few brief bows…” “Bewildered-looking student arrives wearing white sun-helmet. He says it is protection against the heat of the corona.” One student quips that “Einsten’s just sent up a smoke-screen to protect his theory.”

The Globe ran its extensive, albeit somewhat disappointed, eclipse coverage on Monday January 26.

Eclipses had been in the scientific news, so interest was perhaps particularly high. In 1919, Arthur Eddington had famously confirmed Einstein’s predictions for the behaviour of light in gravity by observing stars around the eclipsed sun and comparing them with their usual relationships. The 1925 total eclipse, only the fourth since 1919 and one of the most accessible, must have therefore attracted a good deal of professional and amateur scientific high-stakes excitement, as the smartass student observed. 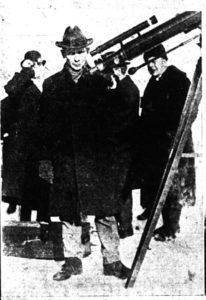 Clarence A. Chant with his telescope at the "ill-fated" eclipse trip to Long's Corners. Photo: J.H. Boyd, Globe Photographer

As part of a university outreach program, U of T’s Professor of Astronomy Clarence A. Chant alongside associate professor Reynold K. Young, wrote a pamphlet making suggestions for amateur observations of the eclipse, including a suggestion for crowd-sourcing the exact borders of the totality. Those in the totality would see a corona, those outside of it would not—observations from amateurs of what they saw, where and when (“On the previous evening get the correct time at 10 o’clock from your neighbour’s radio”) would help to determine the exact width of the sun’s shadow. Also suggested were photometric measurements, although, Chant noted these “are very difficult”.

Best, perhaps, left to the professionals? Among those people joining Chant on the chilly scientific observation trip to Long’s Corners, near (now in) Hamilton, Ontario, were a band of five scientists and technicians from U of T’s small Engineering Physics and Photography department. It was this group, led by Professor G. R. Anderson, and including K. B. Jackson, who were making the photometric observations as part of a project of the American Society of Illuminating Engineers.

Jackson had been a sessional instructor in the small Engineering Physics and Photography department since being hired in 1919 after serving in the Canadian Expeditionary Force during the First World. It was his interest in photography as a technology that led his career: although he didn’t have a graduate degree in 1925, he was a frequent assistant—likely as a photographic technician—on a variety of research projects at the university. He’d also just finished a successful stint as Chairman of Hart House’s Camera Club. Later, as a Professor of what became an undergraduate degree-granting department largely due to his urging, Jackson’s research also continued to focus on photographic techniques. In 1933, for example, he headed an investigation into “artificial illuminants used in photography”, in 1938 he became involved in photogrammetry, a thread that would becoming dominant over the rest of his career, until the 1960s, as a form of photographic analysis.

The very thick clouds on the morning of January 24th disappointed many amateur and professional viewers, including astronomer Chant and his 45’ camera/telescope. However, there were some Canadian successes: local photographers, Royal Canadian Air Force pilots, attempted to get above the clouds and were somewhat successful (their cloudy images are those on the Globe’s front page, above, centre). And observations that didn’t rely on a clear view went ahead, including experiments involving wireless signals, magnetic observations and, of course, the photometric measurements taken by G.R. Anderson and K.B. Jackson that resulted in a pair of glass slides.

The equipment used to make the observations is recorded on the slides themselves, alongside other information: 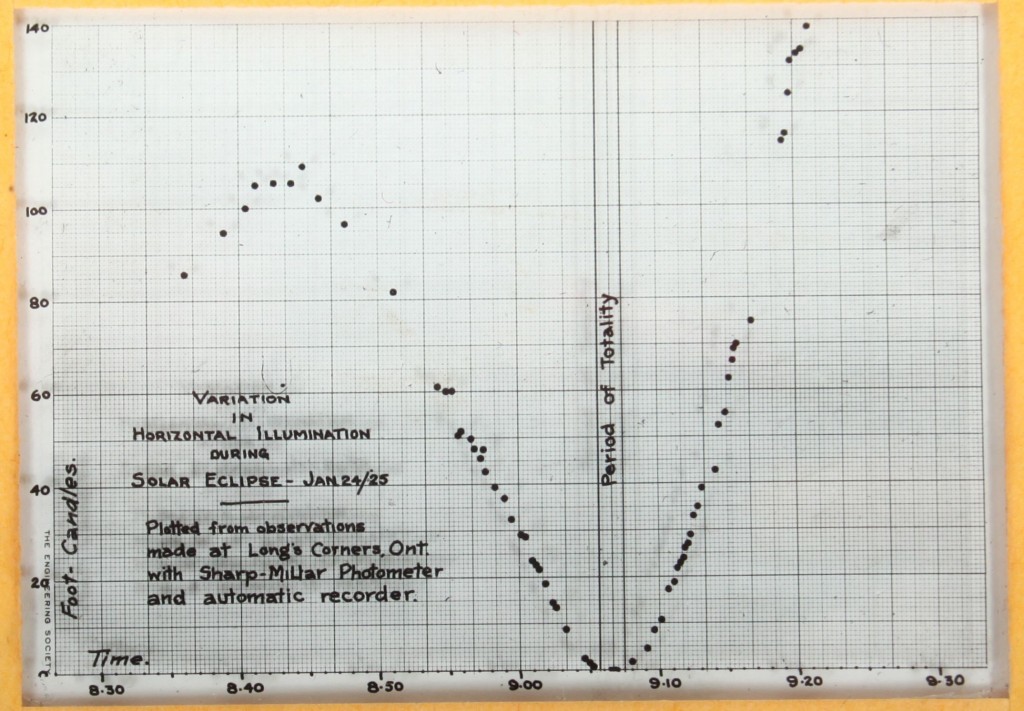 The “Sharp-Millar Photometer” described was the instrument in which the glass slides were discovered more than 80 years later. Manufactured by Foote-Pearson & Co., a New York state company, it was 70cm long and finely made out of wood, glass and brass, a design manufactured since the 1900s. It operates on simple, mechanical principles reliant on human judgment: Looking with the naked eye, compare the brightness of the observed object (e.g. the sun) with a lamp with a known brightness that could be adjusted until the two were of a similar brightness. 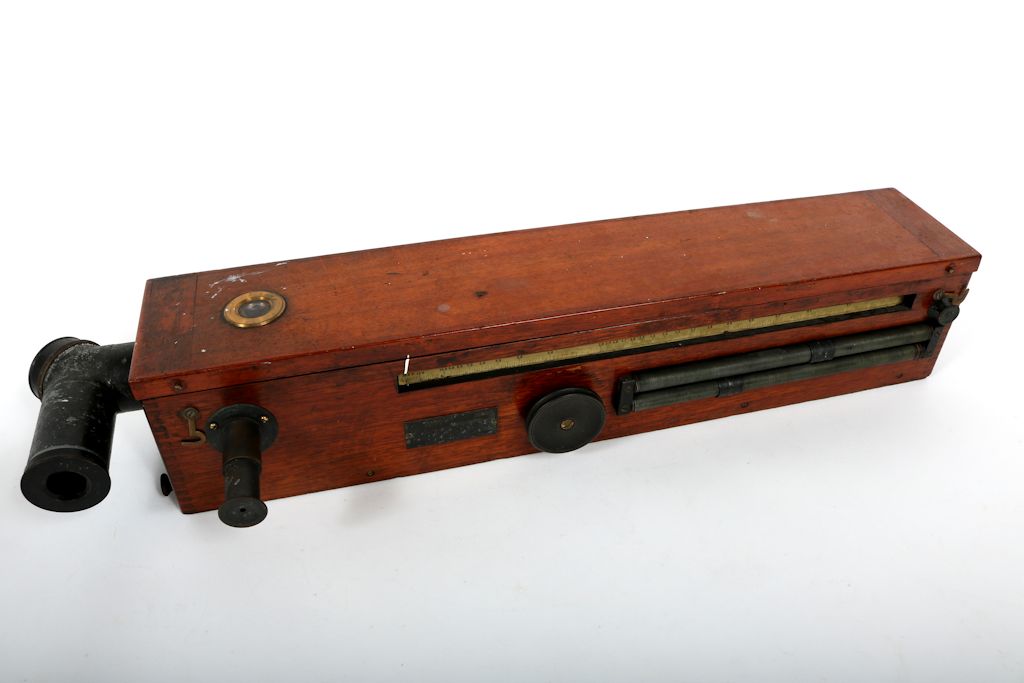 In this case, Jackson was measuring “horizontal illumination”, the amount of light on a horizontal surface (e.g. a table). How this relates to the orientation of the photometer is not clear (see above). Also on this slide, Jackson also notes that an “automatic recorder” was used, although exactly what additional equipment this entailed is again, not recorded or visible in the photograph.

Although the photometer could also measure in candle-power, the measurements on one slide were taken in “candle-feet”, a standard brightness measurement that describes the amount of light given to a specific space within a specific time. This graph is plotted against the real time that morning, from about 8:36, when the eclipse was already underway, to 9:23. Although changes in cloud cover must have caused the initial rise in brightness, the arc of the light disappearing and re-appearing is clearly visible, with dotted lines in the centre of the graph showing the location of the totality.

A second slide depicts a “Photometrigraph”. This graph covers a much shorter length of time directly around the totality, and may actually show the original “automatically recorded” observations. Filters of different colours—medium orange, light orange, blue—are entered periodically, resulting in a period of no observations followed by an adjustment. The jerky result could be indications of hand made adjustments to the photometer being recorded on—for example—a rotating drum. 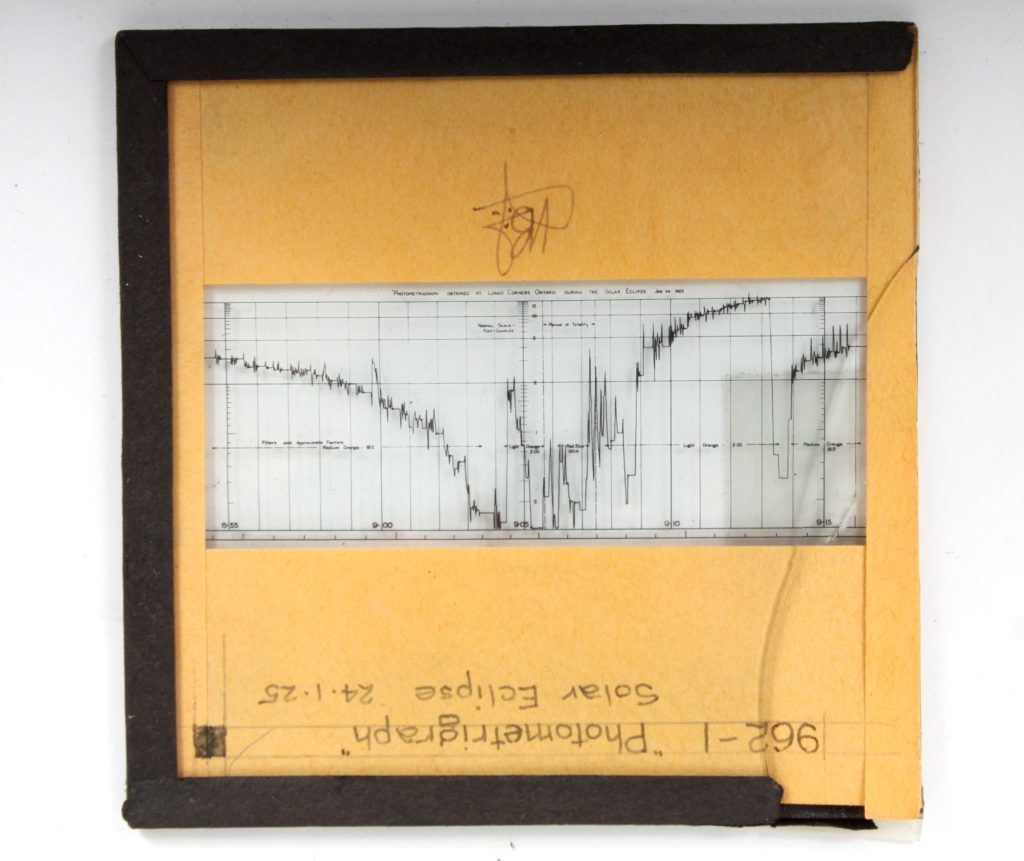 This "photometrigraph" may show the original data as recorded. Note the K.B.J. initials, at the top.

Both these slides consist of images printed onto glass marked with a grid pattern and edged with yellow paper and black tape. On one edge of the grid pattern the words “The Engineering Society” in printed but hand-written script appear. While the University of Toronto—like many universities—had (and has) a student Engineering Society founded in 1885, it’s not clear if these slides were simply connected with the society or actually fabricated by them in some respect. However, Jackson was part of the Faculty of Applied Science, so the name is not unexpected.

The Photometrigraph slide has been broken on the corner. A recent and crude repair, in the form of “invisible” tape, has been appended to hold the pieces together. Otherwise, the slides, standard for the era, and two of tens of thousands surviving from the 1920s through the 1950s at the university, are in good condition. On both, on the yellow paper surround, Jackson has signed them with his initials.

The photos taken at Long’s Corners by the Globe’s photographer (see above) give unusually precise evidence for the creation of the data shown on K.B. Jackson’s slides: they show many of the scientists who were there that day and explicitly point out “S.R.” Anderson (actually G.R.) and the photometers used by his “party”. In this image it is not clear which of the figures with Anderson (on left) is Jackson, if indeed he is in the photo, but the instrument on the right appears to fit the shape and design of the photometer.

The function of slides is to share data: Following the eclipse, Anderson and Jackson, and their colleagues, may have created the slides for student or outreach lectures.

Why the photometer and slides have survived stayed with Jackson until at least his retirement is a testament to his own interest in preserving the historical moment of the eclipse at Long’s Corners, but also to his longevity in the department. Items that become obsolete close to their use are normally regarded as junk; an object that was kept by a professor such as Jackson from the 1920s to the 1960s would look antique and therefore be more likely to survive following Jackson’s retirement or death. 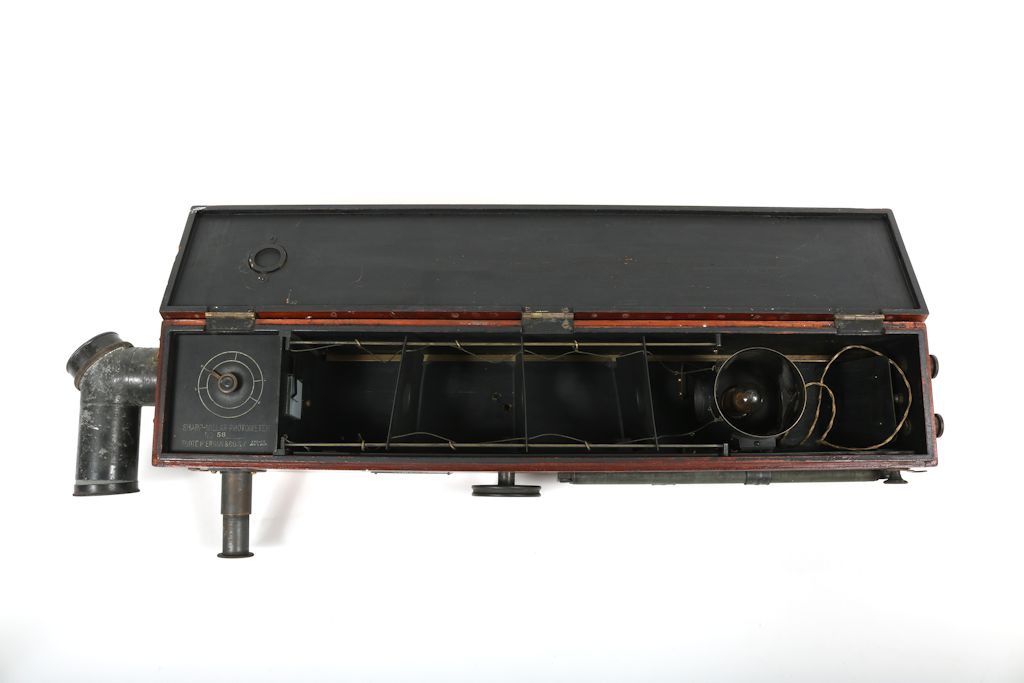 It was not until the photometer was initially catalogued in 2012 as part of the UTSIC project that the slides were discovered inside the photometer, alongside a letter from K.B. Jackson explaining their provenance.

Jackson’s retention of both the slides and photometer, his letter, the survival of the photometer following his death and its eventual collection by UTSIC make these slides very unusual among the items in the university’s collection. We owe to Jackson’s sense of history (or self-importance) this small, evocative window into Toronto’s last total eclipse survives.

If the weather is kinder today than it was in 1925, we’ll see a partial eclipse. But if not, as the cover of the Globe noted said, “Better Luck Next Time”—although the newspaper quotes R.E. Delury of Ottawa’s Dominion Observatory as saying that our next total eclipse would be in 2144. We won’t actually have to wait that long—we’ve got one to look forward to in April 2024. 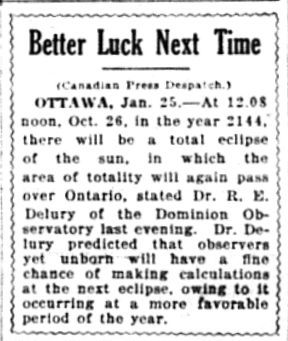 You can see Jackson’s slides and photometer in person alongside many other storied artifacts from U of T’s scientific history in UTSIC’s current exhibit, Untold Stories, now open on the 3rd Floor of Victoria College at the U of T.