Interdisciplinary Colleagues Under the Sea 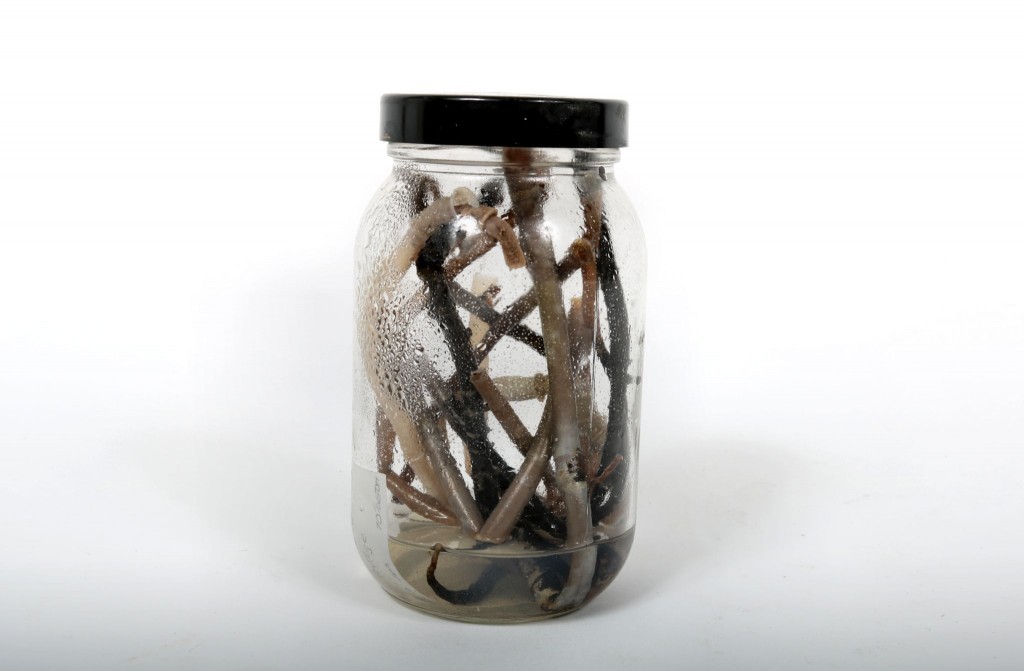 Thanks to Professor Steven D. Scott for his generous loan of this and other objects from his exploration of deep-sea hydrothermal vent sites.

In 1979, geologist Steven Scott saw an image in a National Geographic of hydrothermal vents on the ocean floor, spewing hot black clouds into the surrounding water, and had a moment of realisation: these vents were active examples of the way in which rich mineral deposits he was familiar with on land had been laid down millions of years ago. For the remainder of his career, Scott pursued and became a prominent figure in both the scientific understanding and economic exploitation of these important deep-sea environments.

These tube worms, collected in 1994 during a dive overseen by Scott off the west coast of Canada, are part of research into the ecosystem of these strange hydrothermal environments. They represent the interdisciplinary nature of deep-sea research where the time and cost limitations of submersible dives require scientists of varying fields to work closely together. 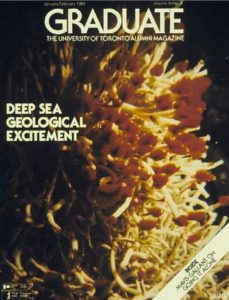 Artifact: About a dozens specimens of Ridgeia sp.

The 1979 National Geographic article was actually a follow-up to an article published two years earlier which printed the first photos of deep-sea creatures living—against the expectations of scientists—on the cold, dark ocean floor. In the 1979 article, colonies of tube worms were seen clustered around hydrothermal vents, living directly on the walls of the ‘black smokers’ emitting hot, acidic, mineral-rich liquid. The reason for the high level of interest in these creatures was their survival in an environment without light. Living next to hydrothermal vents, tube worms survive through chemosynthesis, rather than being reliant—like most flora and fauna—on a photosynthesis-based life cycle. 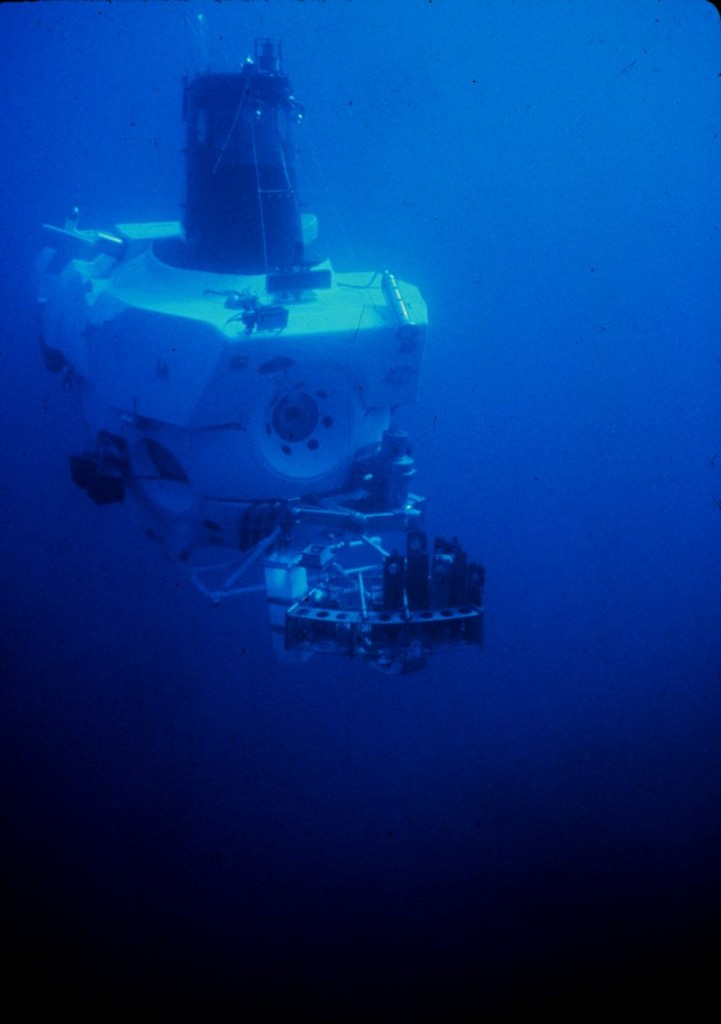 Since these unique ecosystems were first observed, scientists have been collecting samples from the seabed of geological and biological specimens from sites like this across the world. This jar of tube worms is a sample collected from the Southern Explorer Ridge, off the west coast of Canada, in the north Pacific Ocean. It belongs to Steven Scott, a retired U of T Professor.

Scott has been heavily involved in exploration of hydrothermal vents for most of his career. He was one of the first Canadians to see ‘black smokers’ and their associated communities of tube worms first-hand while aboard the ALVIN, a small US Navy submersible capable of transporting a pilot and two scientists. The remoteness of the seabed exploration means that collaboration between interested scientists, such as geologists and biologists, is a necessity. 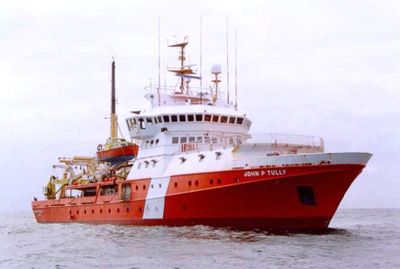 The trip that resulted in the collection of these tube worms was no exception. In 1994, Scott was Chief Scientist on Canadian expedition “CanRidge III” aiming to investigate the relatively little explored hydrothermal vent environments off the west coast of Canada, in a ridge known as the Southern Explorer Ridge. Geologists, physicists and biologists from U of T and the University of Victoria aboard the John P. Tully, a Canadian science ship still active today, were using a remotely operated tethered submarine, ROPOS (Remotely Operated Vehicle for Ocean Sciences). Capable of recording film on the sea bed and collecting and transporting multiple samples, ROPOS made a number of trips to the seabed between July 18th and 29th, all centered on an area of hydrothermal activity nicknamed “Magic Mountain.”

The cruise report compiled by Scott describes the macrobiological goals of the expedition like this: “Explorer hydrothermal vent communities are important because of Explorer’s age and geographic position. The collecting of biological samples from Explorer would be helpful for our study of the geological and historical controls of hydrothermal vent communities.” (Scott 1994, 40). In other words, learning more about the species living on the lesser-known, relatively young and isolated Explorer Ridge would contribute to understanding how this younger community of flora and fauna relate to organisms on other separate and older ridge environments (Fowler & Tunnicliffe 1997). 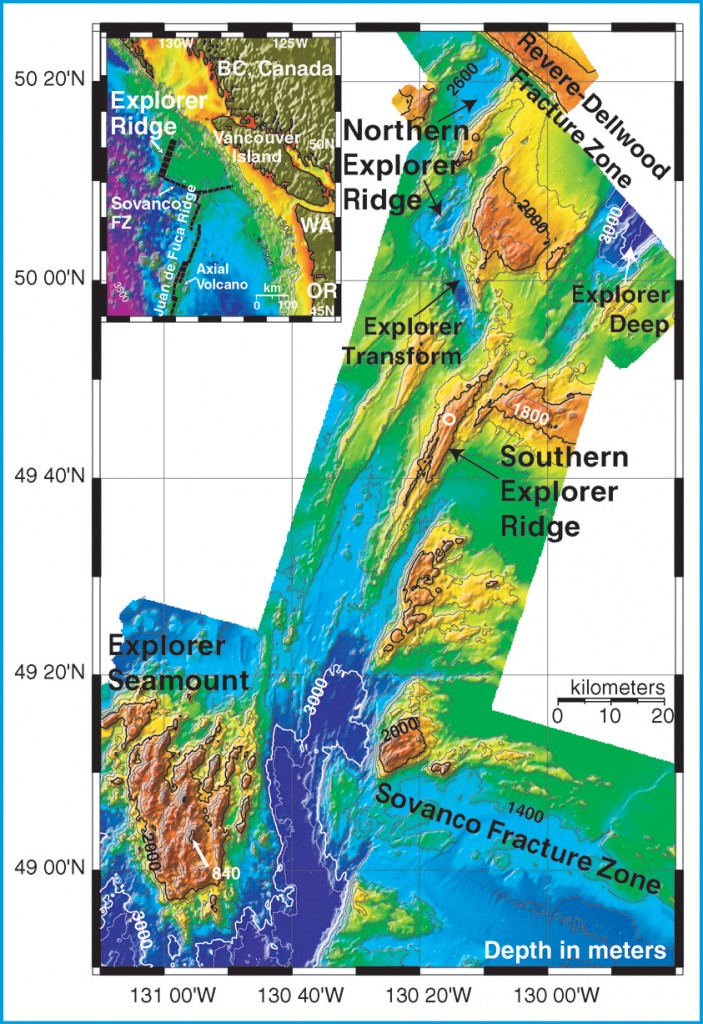 Each of the July dives involved multiple trips using ROPOS to explore different areas of ridge activity. Involved scientists gathered around multiple TV screens onboard the Tully to view footage being relayed from the submersible and allow for suggestions to be made for collections of samples. Each successful dive (technical issues and constraints, and weather problems were frequent) resulted in the collection of a mix of geological and biological samples, film, and still images. Through the work of the geologists, physicists and biologists on the expedition, these specimens contribute to our understanding of these deep-sea environments. Understanding the geological processes, for Scott and other geologists, has lead to seabed mining operations in the Pacific Ocean. For biologists working on ridge environments, such as University of Victoria biologist Verena Tunnicliffe, for whose research these samples were collected, these unusual ecosystems provide hints about the possible genesis and extremes of life on Earth.

These tubeworms are just one of the many artifacts Professor Scott has kept from samples of his work involving hydrothermal vents: he also has rock specimens from his own geological research, dive ephemera, such as a polystyrene cup crushed by the pressure of the deep ocean. In addition, he has a tube worm fossil from Newfoundland, a subject on which he wrote an interdisciplinary paper alongside Peter von Bitter and Paul Schenk (1990). These various items represent the collaboration between physicists, paleontologists, ecologists, microbiologists, and geologists such as Steven Scott, as they have worked on these unique and difficult-to-reach sites. 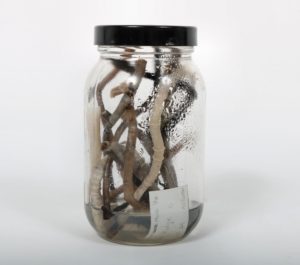 The tube worms are contained in a 500ml glass jar with a black plastic lid. A paper label lying in the base of the jar provides a collection number “023/D284-14b”, the date “August 94” and the location of the collection “Explorer Ridge”. It indicates the preservation liquid is 70% “EtOH” (ethanol). There is only about two centimeters of liquid remaining in the bottom of jar and the specimens above this appear to have dried out. In some conditions, condensation forms on the walls of the jar.

From the dive logs, it appears these specimens were originally fixed (preserved) with a 7% formalin (formaldehyde) solution buffered with sea water to neutralize the formalin’s acidity. It was then transferred to the ethanol for more stable long-term storage.

The jar is full of worms of different colours varying from beige to grey to dark brown, but all between 0.5-0.75cm in diameter. The label describes them as “Ridgeia sp.” a designation which indicates they have not been given a specific species name—a condition that seems to still be the case.

These tube worms were collected for Verena Tunnicliffe, a ridge environment-focused ecologist at the University of Victoria, by two other scientists on the trip—Andrew McArthur and Laurel Franklin. Comparing the identification label on the jar with the dive notes reveals that these samples were collected on dive 284, which took place on July 26, 1994. It was one of 18 geological and biological samples collected, and the only example of tube worms from that dive (Scott 1994, 33). It is recorded as sample 14b. Curiously, although the source of most samples is recorded carefully in the log, the 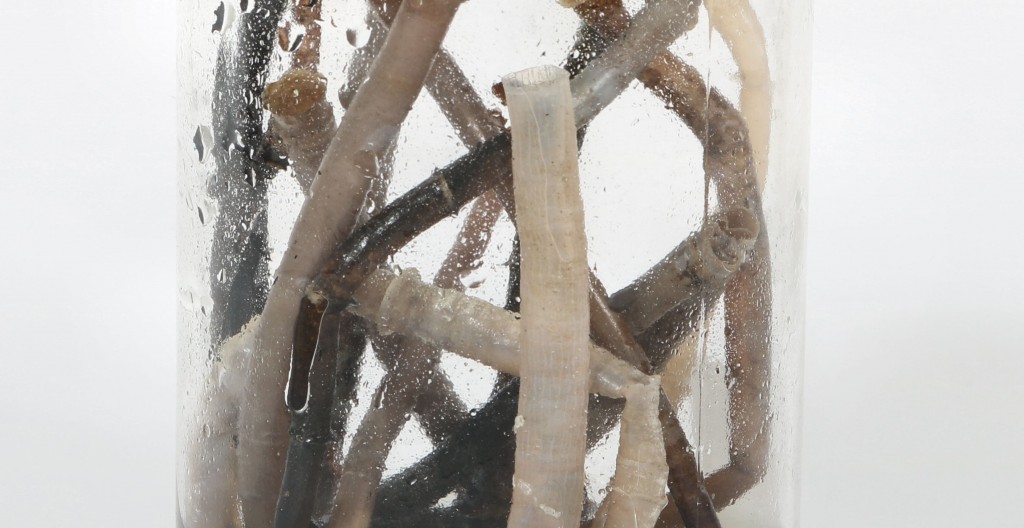 collection of samples 14a through 14c is not noted, which may explain why Scott—rather than biologists McArthur and Franklin—came home with these tube worms. Without the precise context of their habitat being recorded, their scientific use as deep-sea examples of strange life is lessened.

Since 1994, these tubeworms have been stored in Steve Scott’s office in the Earth Science building at the University of Toronto, alongside a number of other significant and exemplary samples and ephemera from his career. These tubeworms and other artifacts from Scott’s research are on display at UTSIC’s exhibit, Untold Stories, until April 2018.

Victoria Fisher is a PhD student at the Institute for the History and Philosophy of Science and Technology at U of T, with an interest in science and technology museum and collections. She has been involved with UTSIC since 2015.