Seeing Sound in the 19th Century 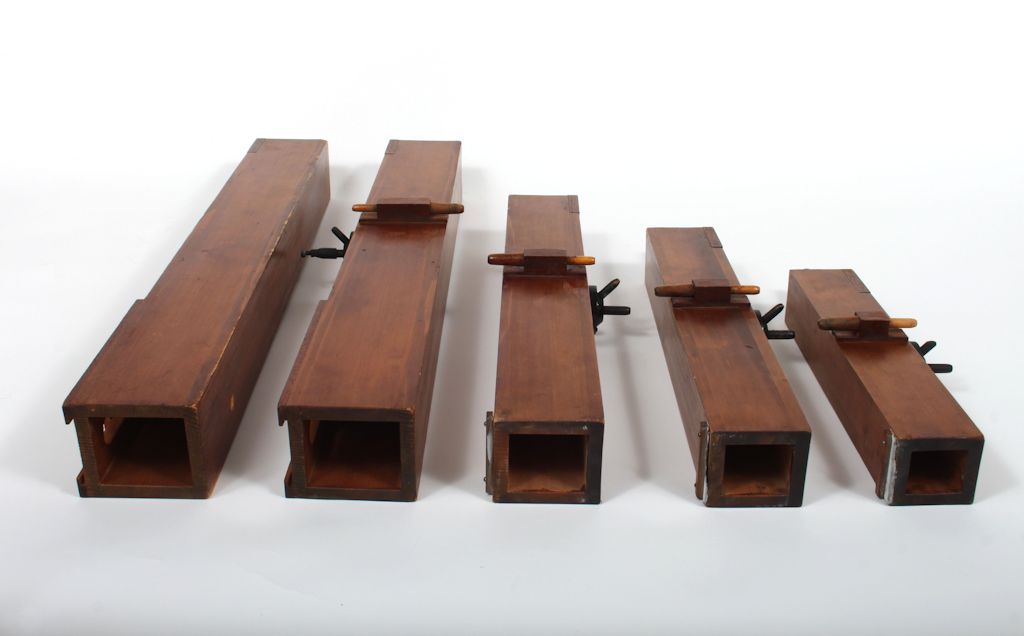 The bulk of research upon which I have gratefully relied for this post was completed by Dr. David Pantalony for his PhD, which was published in 2009 under the title Altered Sensations: Rudolph Koenig’s Acoustical Workshop in Nineteenth Century Paris. Now at the Canada Science and Technology Museum, Pantalony is also a former curator of the Toronto collection, and its continuing supporter.

How can you make sound easier to understand? These five ‘manometric’ wooden organ pipes are a mid-19th century answer to this problem. Gas flames act as indicators of the vibrations inside the pipe, making the sound produced visible and even recordable (by eye, on paper). Although developed as a research instrument, Manometric pipes like this set made a striking and practical teaching tool.

Designed by Rudolph Koenig at the centre of the 19th century scientific instrument trade in Paris, these pipes represent the very height of quality available. Along with dozens of other acoustical instruments, they were purchased in 1878 by the Professor of Physics and Mathematics, James Loudon. They were used in the very first experiment-centric physics laboratory at U of T, as the university began to train prospective Canadian physicists, engineers and teachers in a more practical way. 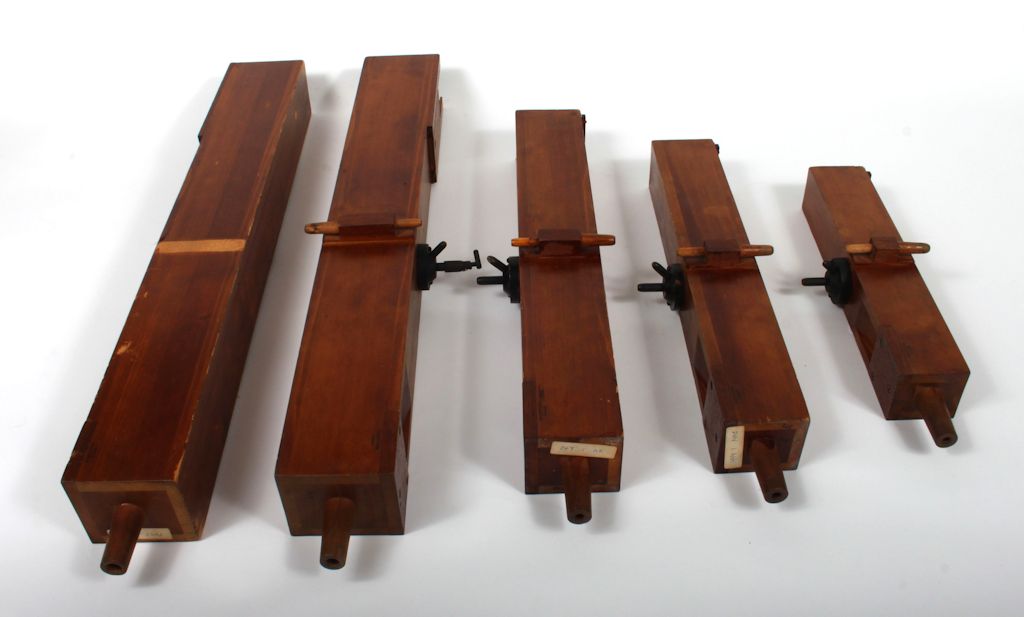 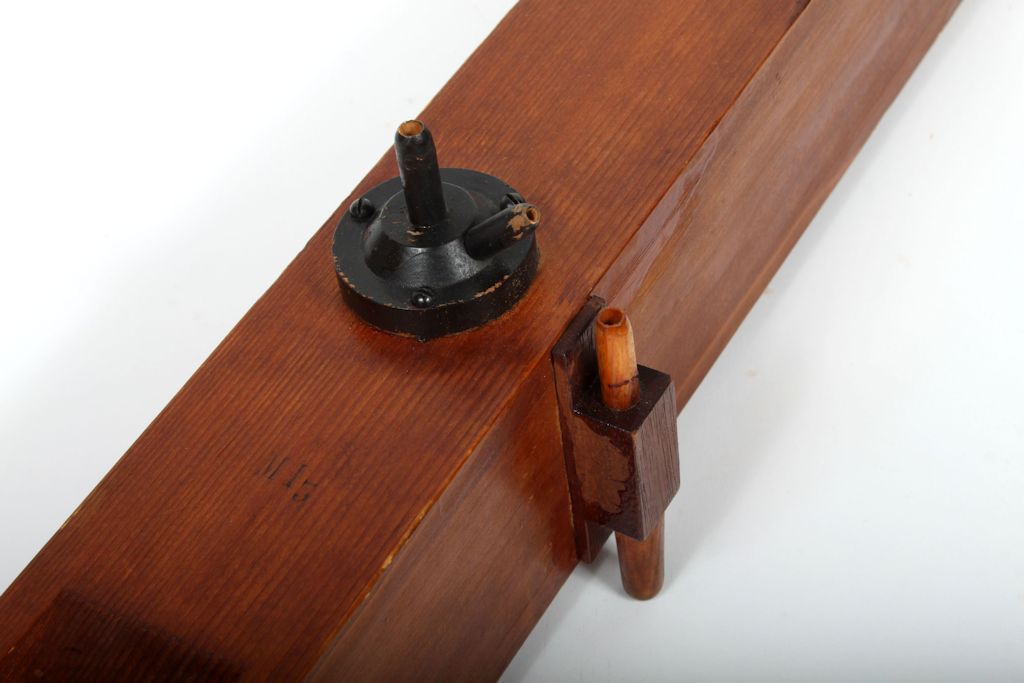 In the mid-19th century, Paris was at the heart of the scientific instrument making world. In a busy field of craftsmen, Rudolph Koenig was the sole maker of acoustical instruments (Pantalony, 12), keen to sell experimental acoustics to buyers stocking demonstration cupboards across North America and Europe (Pantalony 13). In 1876, Koenig was one of many promoting his instruments in Philadelphia and then Buffalo, where he attracted the attention of university professors looking to turn their physics departments towards experiment and demonstration in teaching. One of these was the University of Toronto’s James Loudon, for whom Koenig represented an ideal: “Dr. Koenig was not only a most celebrated maker of acoustical instruments but an eminent scientific man who had received an honorary degree from the University of Königsberg for his discoveries in acoustics.” (Loudon 1916).

The ‘manometric flame capsule’ was not Koenig’s first attempt at making sound more visual, but it was one that impressed buyers and prize-givers (Pantalony, 58). The gas-filled capsule–the black attachment–is separated from the main body of the pipe by a membrane. When the pipe is played, the column of air inside vibrates and the vibration is transmitted through the membrane to the gas in the capsule. When a flow of gas is provided via attached rubber pipes and a flame lit on a connected burner, the resultant change in air pressure inside the organ pipe causes the flame to flicker. This can be made more visible by viewing the flame in a hand-cranked rotating mirror which gives the illusion of a slower continuous oscillation. This apparatus was sold by Koenig with a ‘wind chest’ into which two pipes could be plugged and two flamescompared simultaneously. You can see the apparatus demonstrated here by Paolo Brenni. 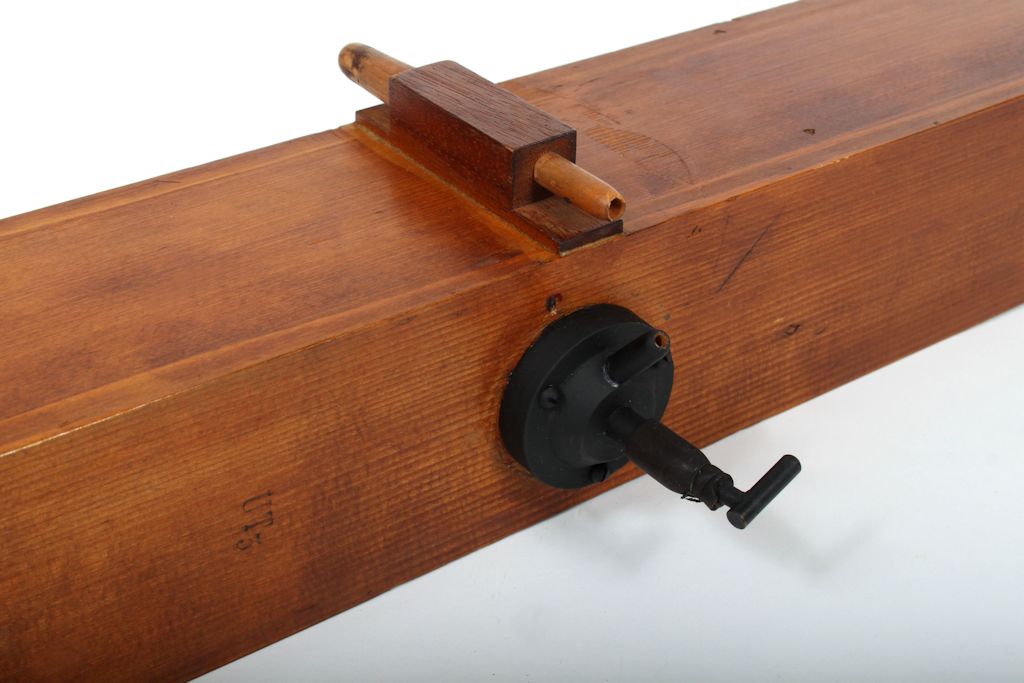 In North America, Koenig’s instruments were primarily used for teaching and demonstration rather than research—there were very few researchers working in advanced acoustics on the continent (Pantalony 123). Nevertheless, the impressiveness and popularity of Koenig’s instruments as tools of acoustical demonstration is obvious. Along with the University of Toronto, in North America, the Smithsonian, the universities of Dartmouth, Amherst, McGill and Harvard, and many others, all have examples of Koenig’s instruments (Pantalony 175). The Koenig instruments at the universities demonstrate how keenly North American institutions wanted to possess and replicate European successes: the German university teaching style (Sibum 232), the Parisian instrument makers, and less successfully—but apparently no less keenly—the precision instrument-driven research model that Koenig seemed (to Loudon) to embody. 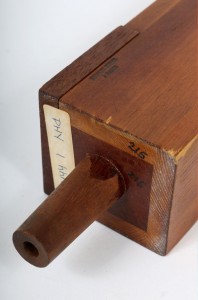 Koenig trained as a maker of musical, rather than scientific, instruments. From Parisian violin maker Vuillaume, he learned to choose and use wood to a high level of precision, and, in the words of David Pantalony, “the experienced coordination of hand and ear” which would be crucial to his work (Pantalony, 6-7). The array of precisely tuned wooden organ pipes that Koenig produced, including these manometric ones, demonstrate his training and skill in musical instrument making. This artisanal, empirical approach was important to Koenig, who disapproved of a purely theoretical or mass-production of precision instruments (Pantalony xxix).

Many of Koenig’s pipes are pine, with the ‘foot’—the narrow end through which air can be blown—and the ‘lip’—the sharp interior edge against which air is pushed—made of mahogany. This is very likely the case with these pipes: the difference in wood between the foot and the body of the pipe is clearly visible. These pipes have wooden manometric attachments (also mahogany): the membranes inside are rabbit-glue coated paper, which evidently tore after some use. James Loudon—with whom Koenig had a long correspondence—wrote to inquire how to mend them (Pantalony 123). 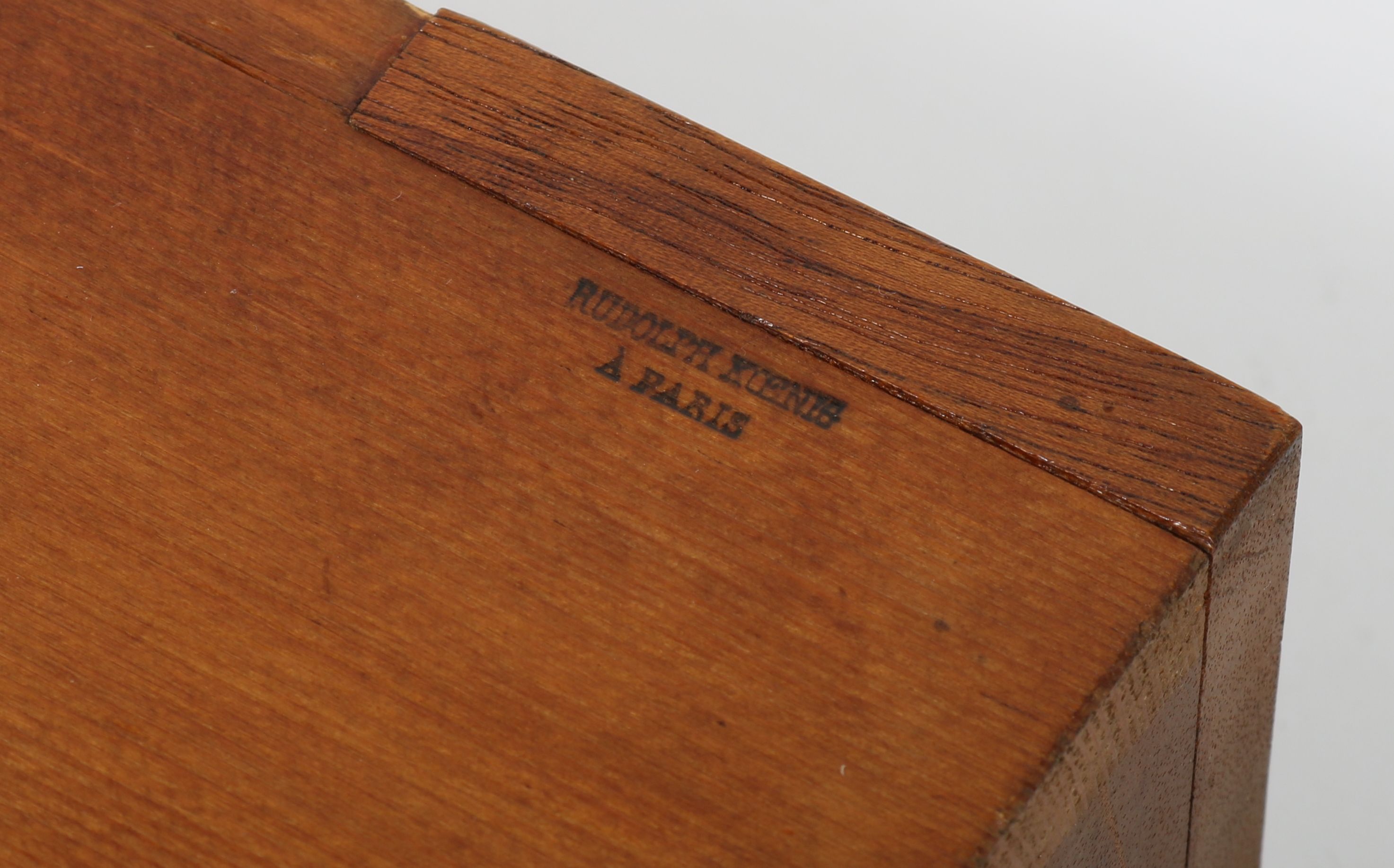 Other features of this pipe tell its story. Stamped on the pipe is RUDOLPH KOENIG À PARIS. This is not simply an identifying mark, but one indicating the source (Paris), and therefore quality, of the instrument. As historian David Pantalony explains, “’À PARIS,’ a recognizable part of the signature of Parisian instrument makers, became a symbol of the French instrument brand at its height.” (Pantalony 10).

On its base, by the narrow foot, the pipe is marked, by hand, with the number ‘215’. This number refers to the instrument’s entry in Koenig’s 1873 catalogue. Most of the Toronto collection, particularly the pipes, have numbers added like this, no doubt to help keep sets together as many of the pipes look similar.

When James Loudon became Professor of Physics and Mathematics in 1875, he was keen to bring the German model of experimental teaching to the university. Instead of merely sitting through lectures and demonstrations, students would carry out experiments and make observations themselves (Friedland pg 79). It took him two years to get support and funds for his vision; however, in 1878 he headed to Europe with the not insignificant sum of $12000 to spend on the finest instruments (Pantalony 119). Rudolph Koenig’s workshop was a primary destination.

These five pipes are just part of the large number of instruments purchased from Koenig in 1878, ranging from simple pipes, to these manometric pipes, to more complicated research apparatus such as the manometric analyser, which elaborated on the manometric concept with a full musical scale of resonators oscillating eight flames that could be viewed simultaneously. You can see an example being demonstrated at Western here.

At North American universities, Koenig’s instruments were almost exclusively used for teaching, and the University of Toronto was no exception:

“The surviving collection, therefore, shows a multi-layered teaching program – heavy use of simple, conservative instruments, more rarified use by demonstrators of the flashy instruments… The set of eight large tuning forks that Koenig brought to Toronto in 1882 for his public demonstrations of beat tones are still almost new, showing that they were not heavily used and most likely not understood.” (Pantalony 122). 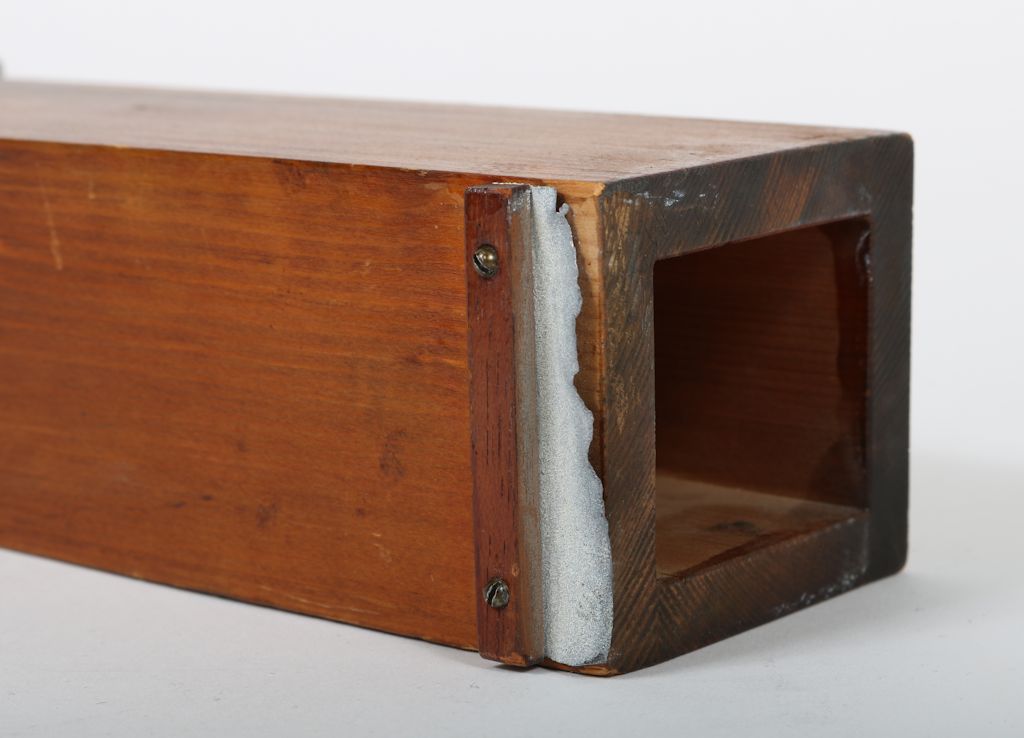 However, the damage to this set of more simple pipes show that upon their arrival in Toronto they were well-used: the manometric capsule tube connections are worn; one capsule has been removed entirely. These pipes originally had lead covers that could be adjusted to close the top of the pipe and turn an ‘open’ pipe into a ‘closed’ one. All of these lead covers have been broken off at the base from being opened and closed repeatedly. The edges of all the pipes are dented and scraped, suggesting their frequent use in demonstrations and experiments in the budding experimental teaching laboratories of the early University of Toronto.

Used and then stored and displayed at the Department of Physics for many years, these pipes—along with most of the Koenig instruments—are now kept within the UTSIC collection.

Victoria Fisher is a PhD student at the Institute for the History and Philosophy of Science and Technology at U of T, with an interest in science and technology museum and collections. She has been involved with UTSIC since 2015.