An unremarkable box, barely larger than a deck of cards, contains UTSIC’s version of psychology’s most iconic object—the Rorschach test. Before (gingerly) unwrapping the tattered brown butcher paper, observe the handwritten note addressed to Roy Ross, Psychologist, Toronto General Hospital: “Dear Ross, Thanks very much. The slides are not perfect, but they are the best that I have seen yet.” These scrawls, dated December 1958, hold potential clues to the object’s provenance.

Upon opening the box, you will find a set of numbered glass slides with images of black inkblots. What do you see in these images? A butterfly? A scorpion? A face? Is the image moving or still? 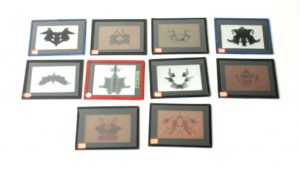 German psychiatrist Herman Rorschach, inspired by Freudian psychoanalysis and the inkblots in a 19th-century children’s game, developed this eponymous test in the 1920s. These deliberately ambiguous images were designed to elicit unconscious processes of  perception: because there was no one way to interpret the inkblots, test-takers would ‘project’ their own hopes and desires, or fears and anxieties, onto the material—hence the name ‘projective test.’

Psychology at University of Toronto

The Rorschach test arrived in North America with the 1930s mass emigre of German intellectuals and scientists, arriving at a moment of fascination with Freudian psychoanalysis and personality research.

So how did the Rorschach test make its way to the University of Toronto? While the historical record on the recipient of these slides, Roy Ross, is scant, he likely used the Rorschach slides both in his lectures at the University of Toronto and his psychiatric work at the Toronto General Hospital. Canadian psychologists and psychiatrists used the Rorschach test in the 1950s to diagnose psychiatric patients: the type of movement test-takers saw in the inkblots was supposed to be indicative of perceptual disorders like schizophrenia.

The University of Toronto has been an important center of Canadian psychology since the late 19th century, when James Baldwin founded the first Canadian experimental psychology laboratory here. The strong tradition of experimental psychology in Toronto did not always accommodate a test like the Rorschach, which was dogged from the beginning by criticisms of its reliability and objectivity. Could listening to people talk about inkblots really provide deep insight into the mind, or was it all just an elaborate game?

Popular culture takes on the Rorschach

My own favourite example comes in the first episode of The Sopranos, which centers on a mafia boss who (reluctantly) begins seeing a psychiatrist. The first time Tony Soprano visits Dr. Melfi, he berates her for having a “trick painting” hanging in her waiting room: “That is a special made psychological picture,” Tony exclaims, “like that, uh..what do you call it test, the ‘Korshack.’” She asks what the painting meant to him, and Tony responds with a tirade against psychology: “it says, we’re from Harvard and what do you think of this spooky depressing barn and this rotted out tree we put here.” Dr. Melfi pushes back: there’s nothing in the painting to indicate that the tree is rotting; what about the picture is depressing and scary to you? And then it comes out that Tony’s been having panic attacks, that he’s worried about a friend’s illness, and perhaps that’s why he saw a dying tree in an innocuous waiting room picture.

Tony Soprano may not know how to pronounce the name Rorschach, but he certainly gets the gist of projective testing: ambiguous images as stimuli to reveal that which you would not otherwise admit to consciousness. Even as he accuses his psychiatrist of trickery and apprises her that he’s in on the scam, Tony unintentionally divulges his own fear of mortality. 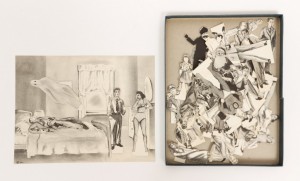 While the particular painting hanging in Dr. Melfi’s waiting room may not have been a trick painting, psychiatrists have indeed used artistic images as a diagnostic tool. Another popular projective test, the Thematic Apperception Test, showed subjects a series of cards with ambiguous scenes of humans and asked them to tell a story about the scene. Created by Henry Murray and Christiana Morgan at Harvard in the 1930s, the TAT shared the assumption of the Rorschach that ambiguous stimuli could provide insights into the unconscious mind.

The TAT is a close kin to another projective test in our collection, the Make a Picture Story Test. Psychologist Edwin Shneidman, who would go on to be a leading expert in the psychology of suicide, created the test in 1947.

I had never heard of the test until I discovered a copy in our collection, and was immediately fascinated by its playful format. The MAPS test contains a series of 21 cards, each with a different scene— a forest, a cemetery, a classroom, or an attic— and around fifty paper dolls of humans, animals and mythic figures, from Santa Claus to Superman. My first instinct was to start playing around with cut-outs on a variety of backgrounds: I put Superman in a forest with a snake, Santa Claus in the classroom with a child, and a ghost in the cemetery. 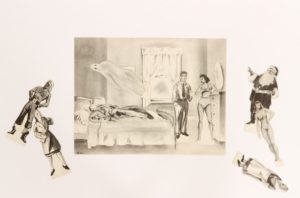 I wasn’t too far off  from the actual instructions, which asked subjects to place the paper dolls on the background and tell a story about their scene. The test administrator would prompt test-takers by asking open-ended questions about the motivations and emotions of their characters, their conflicts, and their narrative arc. They would record the choice and placement of figures on a location sheet, noting down the commentary made by the test-taker. Like with the Rorschach, the idea was that you would project your unconscious onto the image; what was different with MAPS was that you were the creator of your own projective stimulus.

It is not just clinical psychologists who have used projective testing: they have been adopted by anthropologists, who saw image-based tests as more suited to fieldwork with other cultures, and by marketing researchers as a means to uncover consumer motivation. Psychological tests are thus an important way that a variety of people—patients at Toronto General Hospital, focus group participants, or comic book readers—have come into contact with psychology.

Unwrapping that brown paper, or opening up the box of paper dolls, can crack open a whole world of psychology: it takes us from a shelf in a University instrument collection to comic books, from the University of Toronto psychology department to Tony Soprano. Treating psychological tests as material culture offers revealing insights into the relationship between psychology and society.

Stay tuned for more posts on psychological tests from the UTSIC collection!