Colour Vision: Of Eyes and Dyes

In preparation for UTSIC’s “Science in Colour” exhibit (currently showing on the third floor of Victoria College until April 2015) I was able to work with a really interesting set of pathological ophthalmology slides. As far as histological preparations go, they are pretty standard — they consist of thin cross sections of tissue specimens (in this case, human eyes) mounted on glass slides with coverslips. The specimens have been stained with hematoxylin and eosin, which gives them their blue/purple and pinkish colours (see image below). The orange colour around the tissues and coverslip in the second image below is simply an artifact of aging Canada Balsam, the mounting medium used to hold the specimens permanently between the slides and coverslips. 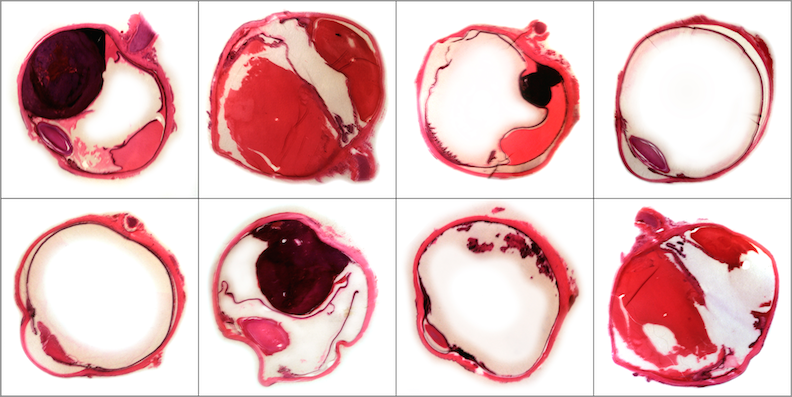 Ophthalmology at the University of Toronto

These slides were prepared by the Ophthalmic Pathology Laboratory at the University of Toronto, likely sometime in the 1950’s (numbers on the slides themselves seem to indicate that they were prepared in 1957); however, they belong to a collection of slides that date from between 1924-1960. Beginning in 1924, two University of Toronto ophthalmologists, Drs. W. L. Robinson and Alexander E. MacDonald, began to accept specimens of eyes sent to them for diagnosis and examination. This marked the beginning of ophthalmic pathology at the university. By the 1930’s, a laboratory of Ophthalmic Pathology had been established, and the department was examining specimens sent in from all over the province and even as far off as Regina (1).

The three slides pictured here, as they appear in the collection, come from different hospitals. The labels of the first two indicate that they came from Guelph and Peterborough Civic hospitals, respectively. The third is labelled “Beth,” which does not refer to any hospital I know of in Ontario, but it was suggested to me that it might refer to the Bethesda hospital in Manitoba.

Currently, the ophthalmic pathology collection, which consists of several boxes of slides, is held in the University of Toronto Archives (UTARMS), to which they were donated by the current director of the Ophthalmic Pathology Lab at the university, Dr. Yeni Yucel. They were initially offered to UTSIC, but we were unfortunately unable to accept them because of a lack of appropriate storage facilities, especially given their status as “natural-historical” type objects. 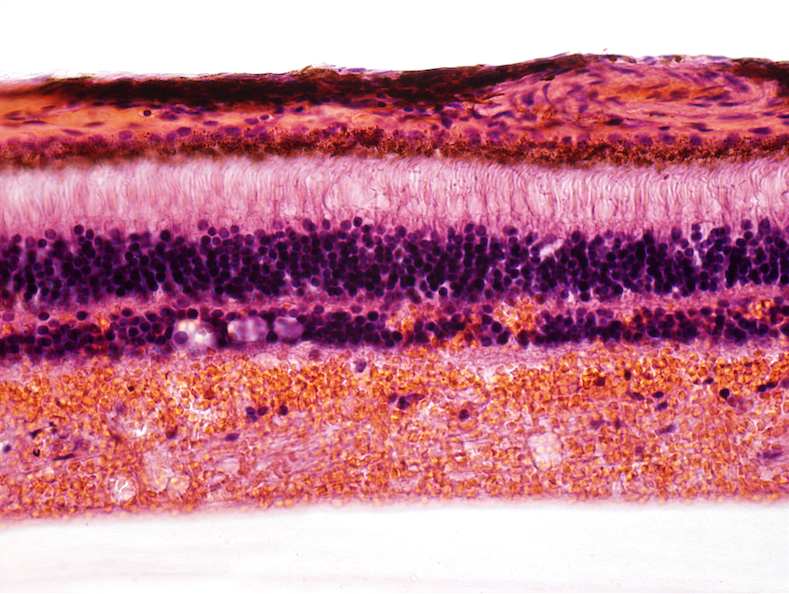 Not only are these slides interesting pieces of the history of ophthalmology at the University of Toronto, but they are also representative of the use of colour in science. In fact, I was interested in these slides primarily because of their use of dyes. When we had the slides photographed under a microscope, they revealed a wonderful series of vividly coloured images. For example: the image to the left is a close-up of a part of the retina. Importantly, all of this colour detail is made visible by the dyes hematoxylin and eosin.

The blue/purple colour in this image comes from hematoxylin. Hematoxylin is called a “basic” dye because it binds to acidic structures, such as DNA and RNA. Thus, it is typically used to show nuclei and free ribosomes within the cytoplasm. The orange/pinkish colour comes from eosin, which is called an “acidic” dye because it binds to basic structures, such as collagen, and many of the proteins in the cytoplasm. Hematoxylin and eosin are commonly used together (they are often just called H&E stains), and combined, they illuminate in fine detail cellular structures that might not be visible with the naked eye (no pun intended!). Consider the following images: 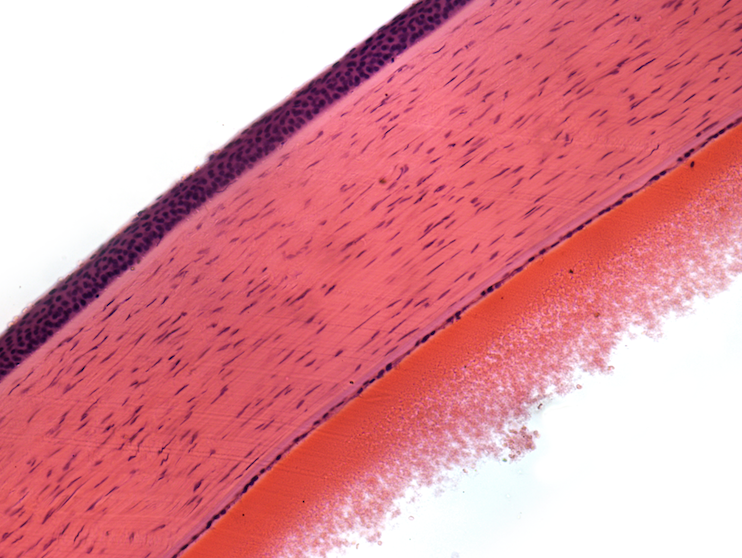 This is an image of a cornea. The dark purple outer layer is the epithelium, a roughly 6-cell layer that is continually being sloughed off and regenerated. The middle layer is the called the stroma. It mostly consists of collagen fibres (which you can see as stained pinkish by eosin), but this layer also contains repair cells called keratocytes that you can see as purple spots scattered among the collagen. 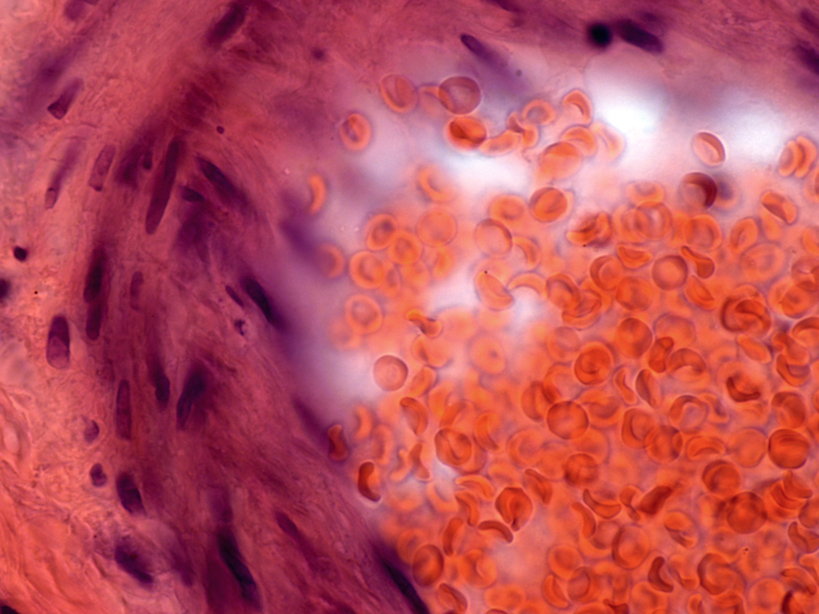 This is an image of a capillary, with red blood cells clearly visible within it. Take a closer look at one of those blood cells. What you might notice is that these cells are uniformly red; since red blood cells have no nuclei, you don’t see the dark purple spots that are typically associated with them. 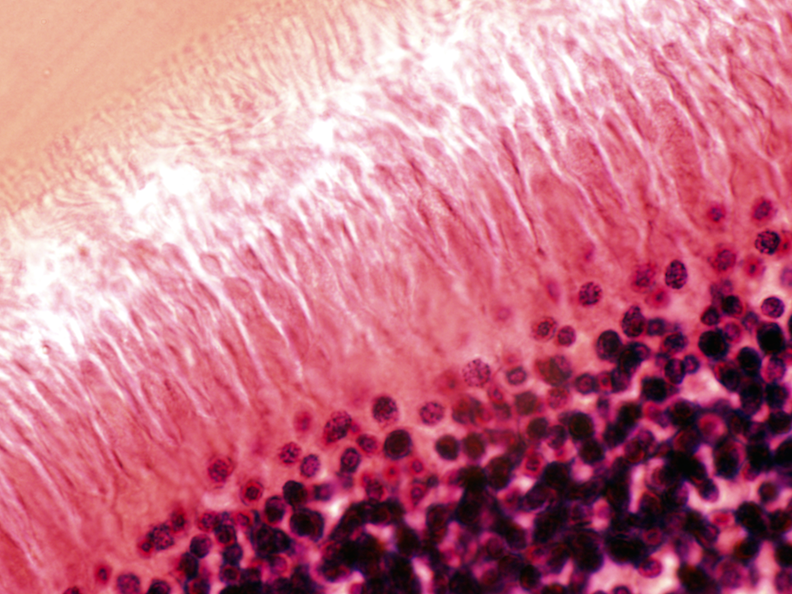 Finally, this is an image of rod and cone cells within the retina. The front of the eye is toward the bottom right of the image. Light travels from this end to the top left corner of the image, which is toward the back of the eye. Rods and cones are long cells that are arranged in parallel and that allow us to see light and colour, respectively. As you can see from the image, their nuclei are clustered in a particular area of the cell which show up as a dark purple layer.

Thus, the use of hematoxylin and eosin in combination allows us to see a great deal of cellular detail, such as the arrangements of cells in the cornea and the unusual morphology of rod and cone cells. Moreover, these dyes have interesting histories in themselves.

History of hematoxylin and eosin

Hematoxylin is derived from an extract of the logwood tree (Haematoxylon campechianum), which is native to Central America. The logwood tree was used traditionally by the Maya for various medicinal purposes — as a treatment for dysentery for example — and to stain cotton. It was discovered by Spanish explorers in the 16th century, where it was highly valued as a source of longer-lasting fabric dye. Logwood extract, or hematoxylin, quickly became a popular fabric dye; indeed, Spanish ships carrying loads of logwood were targeted by pirates en route to Europe. Later, it was used to colour the uniforms of American soldiers during the Civil War. The utility of hematoxylin for histology was first investigated in the mid 19th century, and together with eosin, it remains today one of the most commonly used histology stains. Eosin, in contrast to hematoxylin, is a synthetic dye. First manufactured in the 19th century by a German dye-manufacturing company, its name was derived from the Greek for “morning red”. Together, H&E stains represent the use of both natural and synthetic dyes in a single process (2).

Investigating these ophthalmological slides as material objects takes us on a journey through the history of ophthalmology at the University of Toronto, to tales of piracy and colonialism, and to the early connections between histology and the commercial dye industry. And not only that, but we also learn a little bit about the (very intricate) makeup of our own bodies.