For the Birds: The Bird Behaviour Recorder

There is an instrument sitting on the shelves of UTSIC’s room in the basement of Sid Smith that looks like it was cobbled together from bits of scrap material. Labelled a “bird behaviour recorder,” it turns out that it was in fact hand-made — in the machine shop of the University of Toronto’s Psychology Department — likely sometime in the 1960’s. This instrument, with its silver retro-futuristic feel, was used by Dr. Jerry Hogan to study animal behaviour between the 1960’s and 80’s. 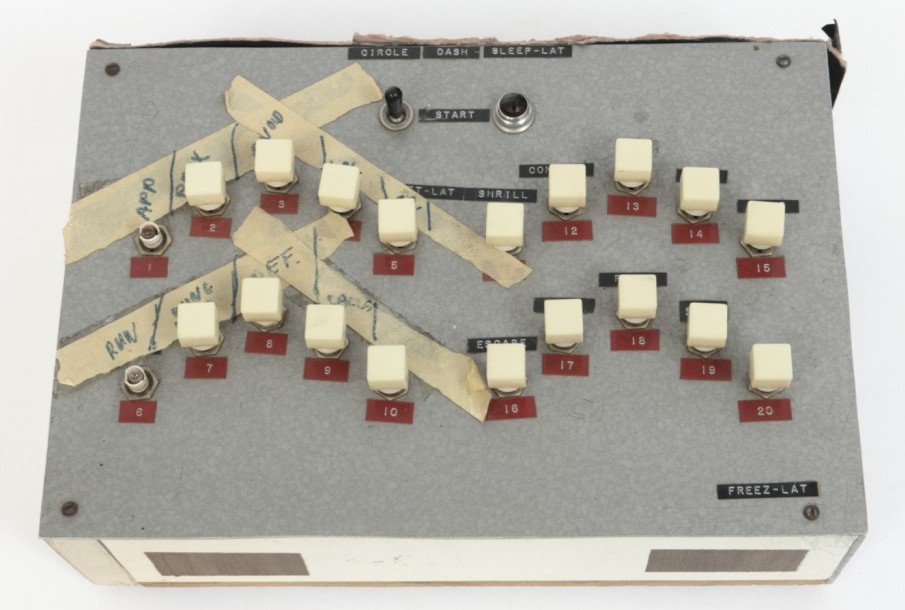 The bird behaviour recorder is actually better termed a keyboard than a recorder as such. It served as a means of inputting data into other electronic devices that did the actual “recording,” such as a bank of counters or an Esterline-Angus recorder (more on this piece of equipment  later). Referred to as the “push-button box” by Dr. Hogan and colleagues, the keyboard is equipped with twenty buttons, each of which represented a specific animal behaviour. The buttons are arranged in two rows of five — in an inverted “V” formation reminiscent of flocks of flying geese — that was likely designed for ergonomic ease of use by the trained observers operating them. Behaviours represented on the keyboard include preening, wing flapping, shrill calling, running, jumping, defecating, and pecking, among others. This particular keyboard was used in several experiments that monitored different collections of chick behaviour, which is perhaps evidenced by the mismatched materials that currently label its buttons. In an e-mail correspondence, Dr. Hogan indicated to me that he believes the design of this particular keyboard was his, but that similar keyboards were likely invented and used by other researchers as well; they were not commercially manufactured at this time. 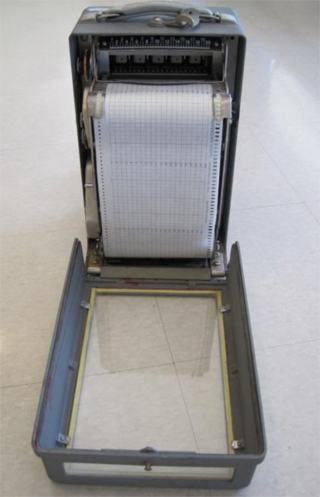 The push-button box was designed so that it could be combined with other counters or recorders that would inscribe the experimenter’s input onto paper. A bank of counters, for example, was used to record information on the frequency and duration of specific behaviours. Buttons could either be pressed once to indicate the occurrence of a behaviour, or held down over longer periods to record its duration. More complex data could be extracted with more elaborate recording devices, such as an Esterline-Angus event recorder. This instrument was commonly used by ethologists and other scientists studying animal  behaviour. The output from the 20-pen Esterline-Angus recorder used by Dr. Hogan was a series of line tracings on a piece of moving chart paper, each of which corresponded to a behaviour represented on the keyboard. When a button was depressed on the push-button box, it activated a switch that pushed the corresponding pen to the side. Thus, in combination with the Esterline-Angus recorder, the push-button box was able to produce a record of the frequency, duration, and sequential patterning of up to 20 different behaviours.

This particularly useful function enabled Dr. Hogan to study, among other things, the development of the hunger drive system in young chicks. The results of this study were published in the journal Behaviour in 1971. The guiding hypothesis of the project was that behaviours in young chicks are relatively independent in terms of causation, but that as chicks develop, certain behaviours come to be grouped together under the control of the same set of causal factors (such as a drive system). More specifically, Dr. Hogan aimed to understand the development and control of behaviours associated with hunger — such as pecking, scratching, and moving — that is, to study the development of the hunger drive system. 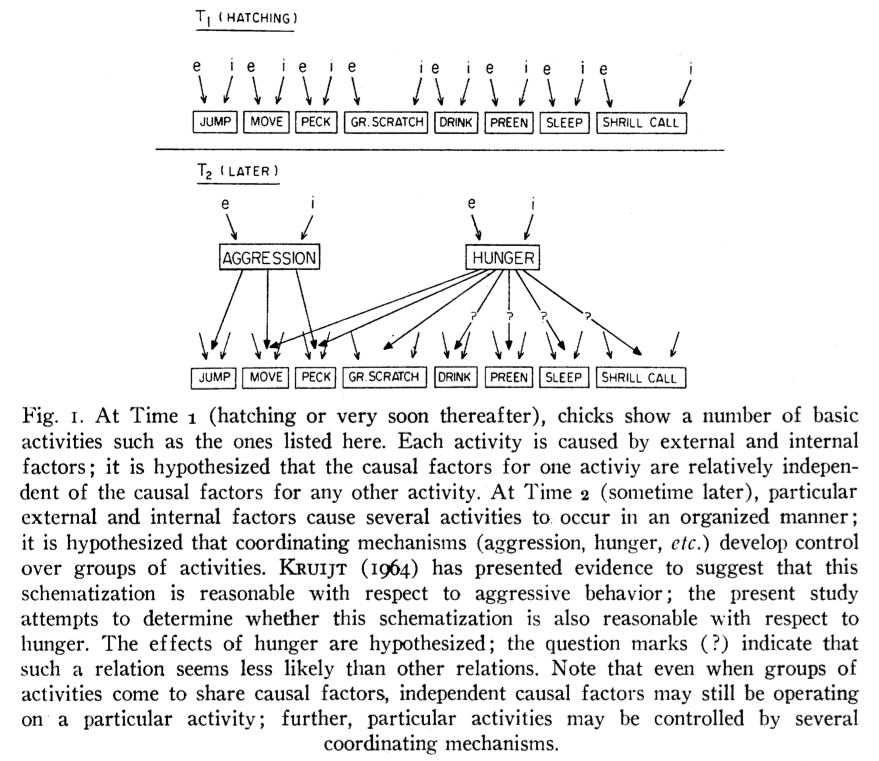 Dr. Hogan's hypothesis about the development of a hunger drive system in young chicks

Working with Burmese Red Junglefowl chicks bred and raised in the lab, Dr. Hogan and colleagues assessed the behaviours of these chicks from hatching through their first few months of life in the presence of various stimuli (food, sand, bare floor) and in either food-deprived or fed conditions. Esterline-Angus recorders documented the frequency, duration, and order of the activities of chicks, while counters kept track of the number of 1-second intervals in which a behaviour occurred and gave the percent of time chicks engaged in any given behaviour. Statistical analyses at this time were done by hand.

Ultimately, Dr. Hogan and colleagues did not find that the chicks raised under their experimental conditions developed a unified hunger controlling mechanism as they had hypothesized. They concluded, therefore, that a hunger drive system does not develop without the appropriate functional experience, that is, without the reinforcement of behaviours that function to provide food (in contrast to, for example, the development of aggressive or sexual drive systems) (1). 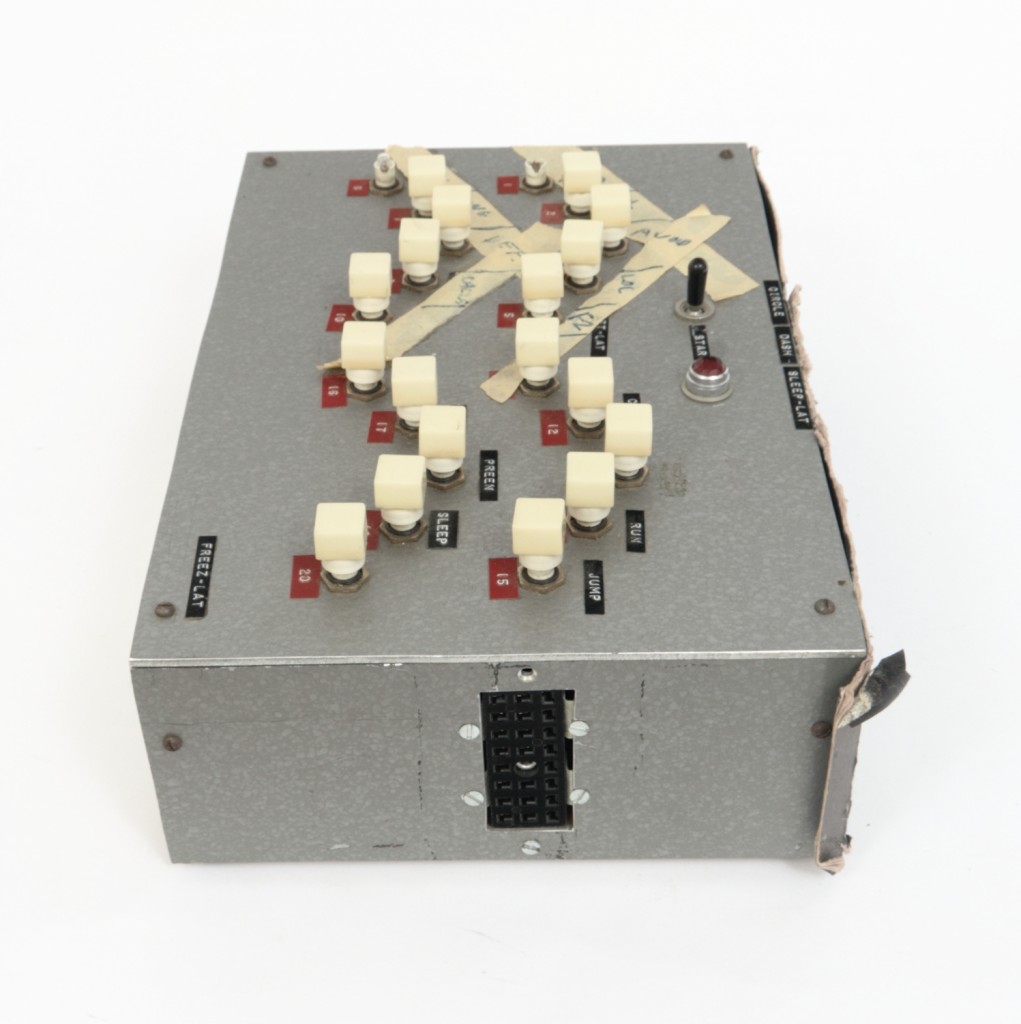 To carry out this experiment, certain assumptions had to be built into the push-button box — for example, that the units of behaviour which the experimenters chose to examine were “natural” units defined by discrete causal factors or functional outputs, and that they were the most relevant to the problem at hand. In this respect, the keyboard can be seen as the reification of a set of behaviours; it allows the scientist to fix a certain set of behaviours and assume they are a given, in order to study their development. With other experimental set-ups, however, it is possible to study the structure of these behaviours in their own respect. Indeed, it has been the focus of Dr. Hogan’s career to study the nature of animal behaviour widely, including both their structure and development. This has been assisted, in part, by instruments such as the push-button box (2).

The bird behaviour keyboard looks more like a high school science experiment than what we typically associate with “science” — flashy, shiny, high-tech machines in spotless laboratories. But what really happens in research is more complicated, and much more interesting than that. Experimental subjects eat gravel, mess up their cages, and defy our experimental expectations, and tools are crafted to suit the needs of researchers as they come and are reshaped when those needs change.