Spectroscopy Beyond the Visible Spectrum: The Sodium Chloride Prism

Alongside the many glass prisms in the UTSIC collection is a triangular prism made from a colourless, translucent substance which came to us from the Physics Department. It stands with one of its triangular faces on a stand affixed to a round wooden base. A removable glass lid encloses the instrument. This prism bears little resemblance to the others in the collection, most of which are attached to brass stands that can be rotated to accommodate the configurations of various optical experiments, and which have no need of a protective glass lid. When I first encountered the prism I assumed it had a particular purpose setting it apart from the more familiar prisms. This purpose only became clear when I learned of the familiar household substance from which the prism is made. The prism in the "Science in Colour" exhibit

Prisms in the history of science

Few scientific instruments are as famous as the glass triangular prism. Experiments using a prism to refract light, which flourished beginning in the early modern period, have been repeated in countless classrooms and museum exhibits, and are even referenced on a Pink Floyd album cover. Naturally, when UTSIC teamed up with the masters students in the University of Toronto’s Museum Studies program for an exhibit of instruments related to colour, I recalled the various glass prisms in our collection. Two of these prisms appear in the exhibit, “Science in Colour” (which is still on display on the third floor of Victoria College.) These prisms on brass stands, dating from the late nineteenth or early twentieth centuries, can be rotated to replicate the experiments of Newton and other early modern investigators of optics. 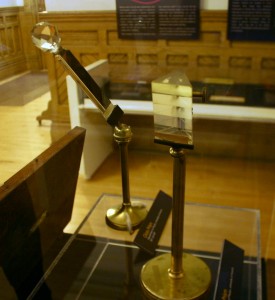 Glass prisms at the "Science in Colour" exhibit.

Isaac Newton used two such prisms in the experimentum crucis described in his Opticks (1704): one to refract white light and produce the colours of the rainbow, and another to recombine the colours into white light. Newton’s experiment demonstrated that the prism doesn’t transform the white light into coloured light; rather, it reveals the colours of which white light is composed. This is ultimately the basis of spectroscopy in both chemistry and astronomy (although modern spectroscopic analysis generally uses a grate to diffract white light rather than a prism to refract it). Nineteenth-century chemists found that substances emit characteristic variations on the visible light spectrum when heated. When astronomers compared these spectra to those emitted by distant objects in space, they could determine which chemical elements were present in the bodies they observed.

This familiar story was the context of my initial research for “Science in Colour.” As a historian who spends most of his days in the seventeenth century, I expected that the each of the prisms in UTSIC’s collections would ultimately be variations on Newton’s original theme. One prism, however, challenged that expectation. This prism, shorter and fatter than the others, was attached to a round wooden base and covered by a glass lid. As it’s colourless and nearly transparent,  I assumed the prism was made of glass and that the lid was meant to protect it from physical damage. Still, the prism seemed unusual and worth investigating, so I got to work beginning with the manufacturer and model number recorded on a tag attached to the instrument.

A prism of rock salt

My search turned up several articles in scientific journals, mainly from the 1950s, that referred to prisms like ours used with a PerkinElmer Model 12 infrared spectrometer. (The model number I had copied down belongs to the spectrometer, not the prism itself, so they were evidently meant to be used together.) These articles identified it as a prism made not of glass, but of sodium chloride (NaCl) – salt. If I had known about NaCl prisms, the glass lid would have been a dead giveaway: since water dissolves salt, these prisms need to be covered when they’re not in use. Like their glass forebears, NaCl prisms are used to make visible what is normally invisible, but the target in this case is not the colours that compose white light.

By the mid-twentieth century, salt crystals had become an crucial element in experiments that allowed spectroscopy to be extended beyond the visible spectrum. A crystal of rock salt will absorb visible light rather than refracting it, which makes it useless for spectroscopy as we usually think of it. But rock salt doesn’t absorb infrared light, that is, light with a wavelength slightly greater than the red end of the visible spectrum. This means that NaCl lenses can be used to filter out visible light from infrared, and NaCl prisms can be used to refract infrared energy and produce a characteristic spectrum, just as glass prisms do for visible light. In short experiments with NaCl prisms allowed spectroscopy to be extended to points on the electromagnetic spectrum beyond visible light, an application that optical researchers in the seventeenth century could scarcely have imagined.

Chemical discoveries: prisms and infrared spectroscopy at the University of Toronto

Once I had determined what the instrument was, I turned my attention to its provenance. My research led mostly to dead ends; I found no record of any department in the university purchasing a NaCl prism. Again, scientific journals held the key. In 1958, two scholars from the Department of Chemistry described their experiments involving a PerkinElmer Model 12 spectrometer and a NaCl prism in The Journal of Chemical Physics. A graduate student named Ken Cashion and his supervisor Dr. John Polanyi devised an apparatus that used the prism to refract the infrared energy emitted during a chemical reaction between hydrogen and chlorine gas. This reaction produces molecules of hydrogen chloride (HCl) and, by measuring the infrared emissions, these chemists were able to detect how the new HCl molecules were moving. Dr. Polanyi, now an emeritus professor, kindly provided this picture of Ken Cashion sitting operating the apparatus they constructed for these experiments. 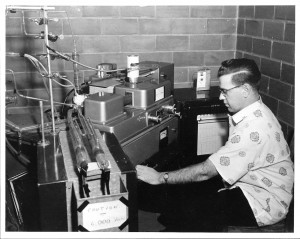 Ken Cashion sitting at the infrared spectrometer in 1958

According to Polanyi, this is the first experiment that allowed an observer to measure how molecules move when two chemicals react. On his website Polanyi describes the excitement during this moment of discovery:

As the recorder traced the infrared chemiluminescent spectrum of HCl Ken Cashion, having been recently ordained as a priest, felt that he should keep his excitement within the bounds of propriety, so he merely beat on the top of the spectrometer with his fists while shouting, “Holy crowbar!”

Dr. Polanyi confirmed in an email to me that the apparatus devised by him and Cashion used a NaCl prism just like ours. He noted that they later switched to a lithium fluoride (LiF) prism, but, as he explains on his website, it was these initial experiments with the NaCl prism that helped to lay the foundations for the field of “reaction dynamics,” which is the study of the motion of molecules during chemical reactions. It’s no surprise that Dr. Polanyi recalls this moment of discovery so vividly: these early experiments in reaction dynamics laid the foundation for the work that earned him the Nobel Prize in Chemistry in 1986.

Cashion and Polanyi were not the only chemists to make an important discovery with a NaCl prism and an infrared spectrometer at the University of Toronto. A. D. Allen, the namesake of our Chemistry Library, used such an apparatus to investigate chemical reactions during the 1960s. In a cabinet at the library displaying chemical instruments, one can see the NaCl prism that Allen’s team used to investigate how nitrogen binds to transition metals. 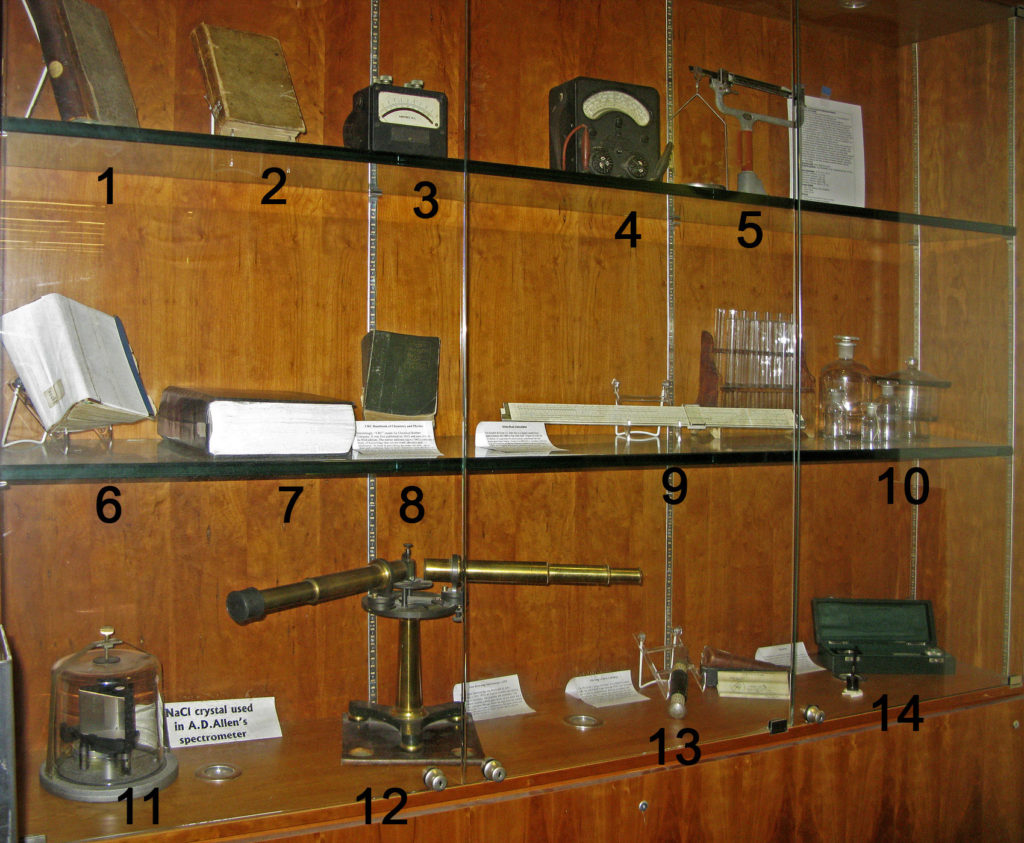 The instruments display at the A.D. Allen Chemistry Library, with the NaCl prism in the bottom-left corner. Image courtesy of J. Bryan Jones, emeritus professor of the Chemistry Department

According to the display, these experiments demonstrated that such a chemical reaction can produce stable molecules, which is crucial for certain microorganisms that bind with atmospheric nitrogen. The sodium chloride prism, then, has helped chemists to understand not only how inanimate substances react, but also how living organisms interact with their chemical environment. While the exact provenance of the NaCl prism in our collection remains unclear, at least we know what it represents in the history of science at the University of Toronto.

The experiments of Cashion, Polanyi and Allen were by no means as simple as shining a pencil of light through a prism. The PerkinElmer infrared spectrometer is an imposing instrument which requires much more expertise than Newton’s experimentum crucis. Yet each of these discoveries is a manifestation of the power of a simple geometric shape, the triangular prism. The history of prism experiments in the twentieth century lends further support to the sentiments of Robert Grosseteste, a medieval scholar of mathematics and optics, who claimed that “the diligent investigator of natural phenomena can give the causes of all natural effects . . . by the rules nad roots and foundations given from the power of geometry.” (Quoted in Amelia Carolina Sparavigna, “Reflection and Refraction in Robert Grosseteste’s De Lineis, Angulis et Figuris,” arXiv e-prints, History and Philosophy of Physics [2013]: 11.) Chemists in the twentieth century presumably didn’t share Grosseteste’s optimism about the power of geometry alone to reveal nature’s secrets, but they did not lose sight of the power of a geometric shape to make the invisible visible.