A Model of the Inner Ear

by Erich Weidenhammer, in memory of Professor Douglas Creelman (1933-2014).

The University Of Toronto Department Of Psychology’s collection of scientific material includes a humble-looking object whose purpose is not obvious. It consists of a metal frame supported by a wooden base. The frame houses a rigid pendulum whose period can be adjusted using a brass weight and a set screw. A row of six of small small weights, hanging from cords of increasing length, are attached to the same bearing-mounted pivot as the pendulum and are set in motion when the pendulum is swung.  Obviously locally made, the instrument has a distinctly utilitarian quality. The wooden base is unfinished, as are the sawn surfaces of the metal frame.

This object seemed at first to be a model of the basilar membrane, albeit an oddly abstract one.  The basilar membrane, located within the cochlea, is part of the mammalian inner ear. Varying both in width and stiffness along its length, it responds to the range of audible sounds based on the fact that different regions of the membrane will respond to particular frequencies by producing areas of maximum amplitude in a travelling mechanical wave traversing the membrane. Hair cells located along its length transform these positions of maximal amplitude into nerve impulses.  You can see a computer rendered illustration of the basilar membrane here. 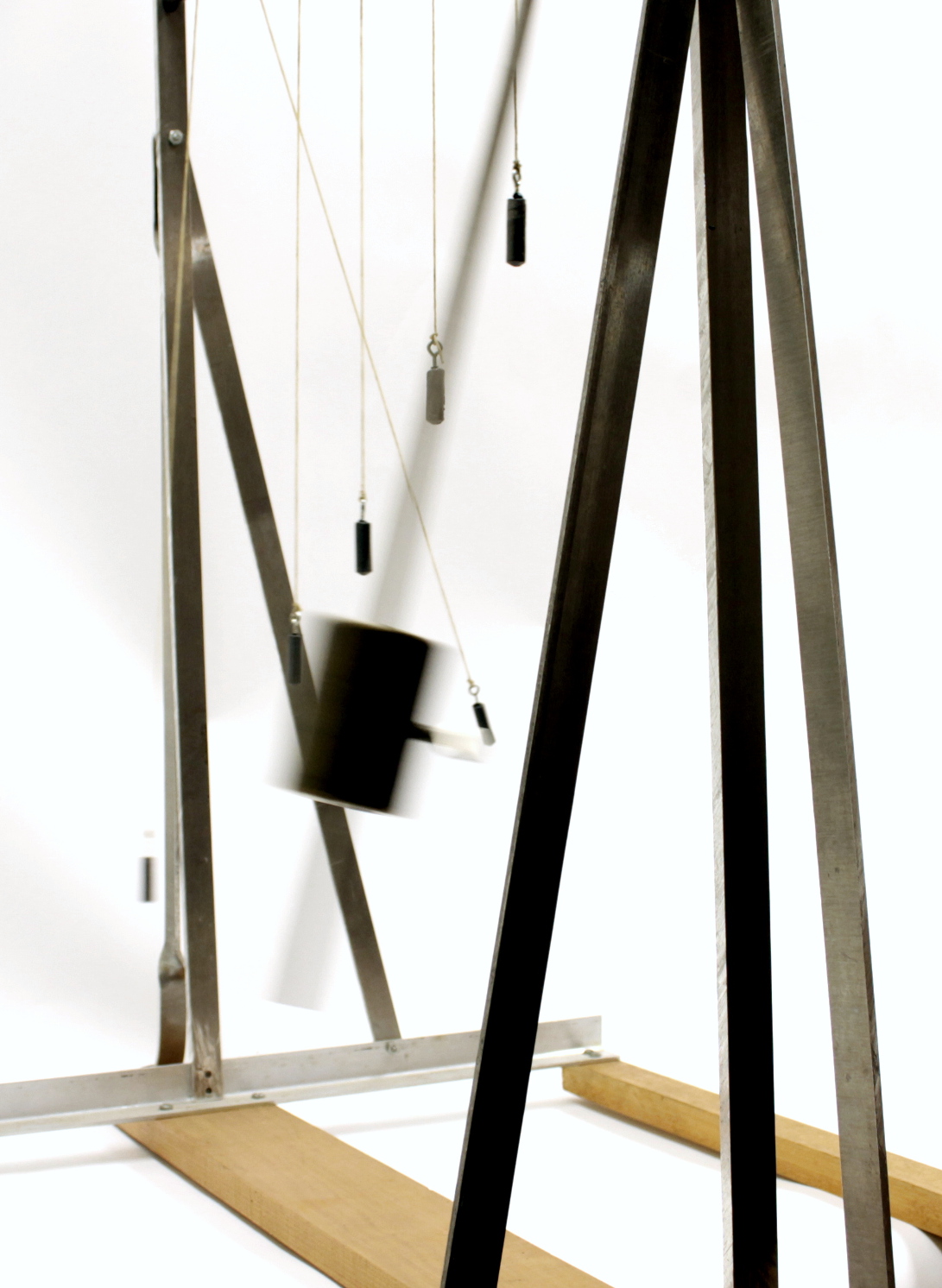 Had our assumptions been correct, the model would have represented this system in the following way: By adjusting the length of the pendulum swing, the user can represent a range of audible frequencies entering the ear. The length of the cords from which the weights are suspended would represent the varying stiffness and mass along the length of the membrane. A shortened pendulum will produce more rapid (higher frequency) swings.  Though all of the weights will be set in motion, the system will settle into a state in which a single short cord corresponding to the frequency will be swinging noticeably more that the others. This could be compared to the manner in which the stiffer, lower mass parts of the basilar membrane respond to higher frequency sound. A longer pendulum will  stimulate one of the longer cords.

There have been many physical models representing the basilar membrane produced before and after this model was created—such things are now modelled on computer. In 1928, the Hungarian born physicist and physiologist Georg von Békésy (1899-1972) created the physical model that you see described on the right in a 1930 article in L’année psychologique. Békésy’s apparatus, incorporating a fluid-filled chamber, a rubber membrane, and small orifices through which the sound waves enter, was a research tool that simulated certain important physical characteristics of the cochlea in order to reproduce the travelling wave phenomenon.  Békésy’s work, which also involved the careful dissection of cadavers and the vivisection of animals to expose the delicate structures of the inner ear, earned him the 1961 Nobel Prize in Medicine and Physiology “for his discoveries of the physical mechanism of stimulation within the cochlea”.

Békésy’s description of his model of the basilar membrane from 'L’année psychologique' (1930).

While Békésy’s 1928 apparatus involved some inevitable abstraction (for instance the snail shell-like curl of the cochlea was impossible to reproduce), it nevertheless comes much closer to representing the working principle of the basilar membrane than our own model. By chance, I discovered the reason for this discrepancy while searching through long-forgotten email correspondence with Professor Douglas Creelman, who had had this model made.

Our model does not, in fact, represent Békésy’s insight into the workings of the inner ear. Although it is, apparently, a small version of a model devised by Békésy, it represents an older theory of the ear’s sensitivity to sound that his ideas supplanted. Hermann von Helmholtz (1821-1894), a Prussian-born physician and physicist, initially believed that the hair cells of the ear were individual resonators, though he later modified his account slightly in light of physiological discoveries concerning the basilar membrane. In his understanding, hearing involved the reconstitution of various pure tones, dissected by individual resonators, into complex sounds. In our model, the hanging weights do not represent points of maximum amplitute in a wave travelling though a membrane but rather Helmholtz’s individual resonators sensitive to particular frequencies

This realization is especially interesting since the UTSIC physics and psychology collections contain a number of objects, acquired by the School of Practical Science in the late 19th century, that represent Helmholtz’s understanding of hearing. These include a set of brass Helmholtz resonators. Each resonator contains a small nipple that, when put to the auditory canal, reveals whether a complex sound contains the frequency to which the resonator is tuned. Another instrument, Helmholtz’s impressive “large apparatus for compounding timbres of 10 harmonics”, features ten brass resonators actuated by electromagnetically driven tuning forks. These can be activated simultaneously using a keyboard. This instrument was used to show that vowel sounds could be produced by combining harmonic overtones. 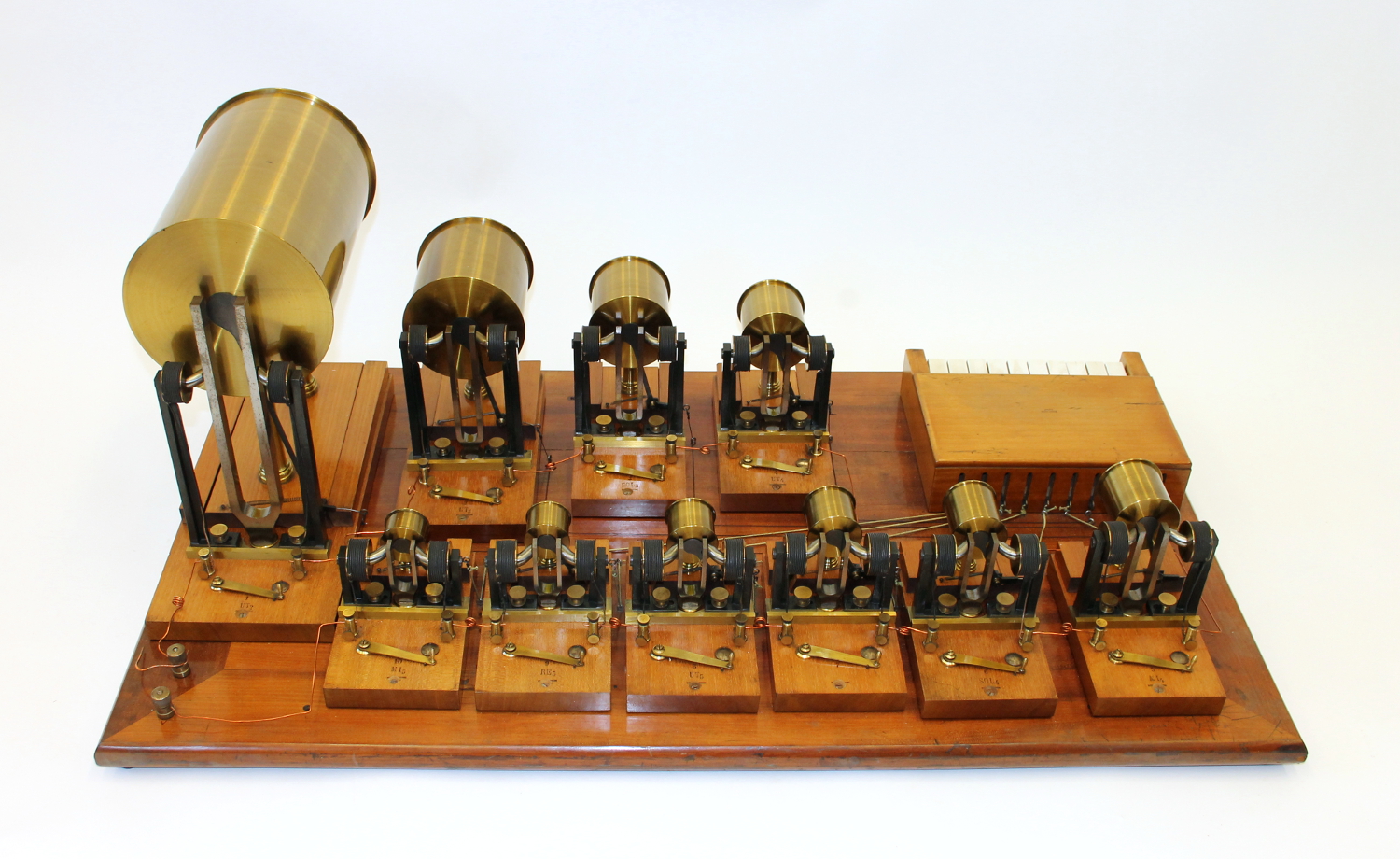 Helmholtz’s instrument for compounding the timbres of 10 harmonics. Made in the Parisian workshop of Rudolph Koenig, this instrument was purchased by the University of Toronto in the last quarter of the 19th century.

Like the recent model representing Helmholtz’s theory of hearing, these gorgeous 19th demonstration instruments, made by the Parisian instrument maker Rudolph Koenig (1832-1901), were tools for demonstration rather than research. Unlike the recent model, they are well-finished, high-status instruments that showcase the skills of European instrument makers—Koenig trained as a violin maker—along with the wealth and sophistication of the community that purchased them. This contrast is, perhaps, an example of the changing importance of aesthetics and public demonstration within the sciences.

Among other things, this model represents the work of Professor Douglas Creelman who likely commissioned it from the former machine shop of the Department of Psychology at some point during his fifty-year career at the University of Toronto. Creelman received a BA in psychology from Harvard and his MA and PhD from the University of Michigan before coming to the University of Toronto in 1963. His specialization was in detection theory, an approach to measuring and describing the performance of a system meant to accurately detect signals from noise. His work focused especially on the human auditory system, notably the detection and discrimination of sound. 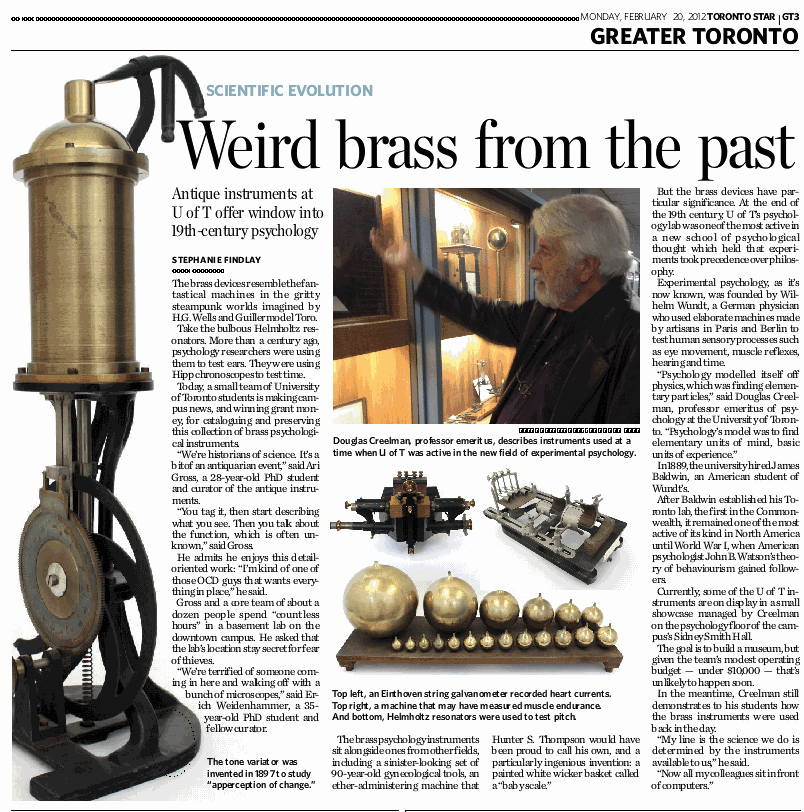 A 2012 article in the Toronto Star describing Professor Creelman's involvement with the Department of Psychology collection.

We at UTSIC knew him as one of a handful of emeritus professors who, in the absence of a University-wide policy governing collections, took responsibility for safeguarding the historical scientific material culture of their respective departments. You can watch him discuss a number of objects in the psych collection here (use Internet Explorer). He would sometimes tell the story of recovering the Hipp Chronoscope—an elaborate precision timing device that had been the centrepiece of early University of Toronto psychological laboratory—from a departing colleague who assumed that it was unwanted. Professor Creelman encouraged historians of science to work with the collection. These opportunities launched at least one professional career in the history of scientific material culture. He also supported the founding of the UTSIC with a generous donation that was matched by his department.

Professor Creelman passed away unexpectedly earlier this year. A few months later, I noticed that a historical adaptometer (an instrument for testing dark adaptation), which he had kept on display in his office, had been returned to the psychology storage room. It was a sad moment. On reflection though, it seemed a reminder that we give meaning to the objects that we use and value. These objects are often more durable than we are, and they preserve the memory of our lives and ideas.

Thanks to Professor Chris Green for his help in researching this object.