A Whirl of Colour: The Zimmermann Colour Variator in the Early Psychology Laboratory at the University of Toronto 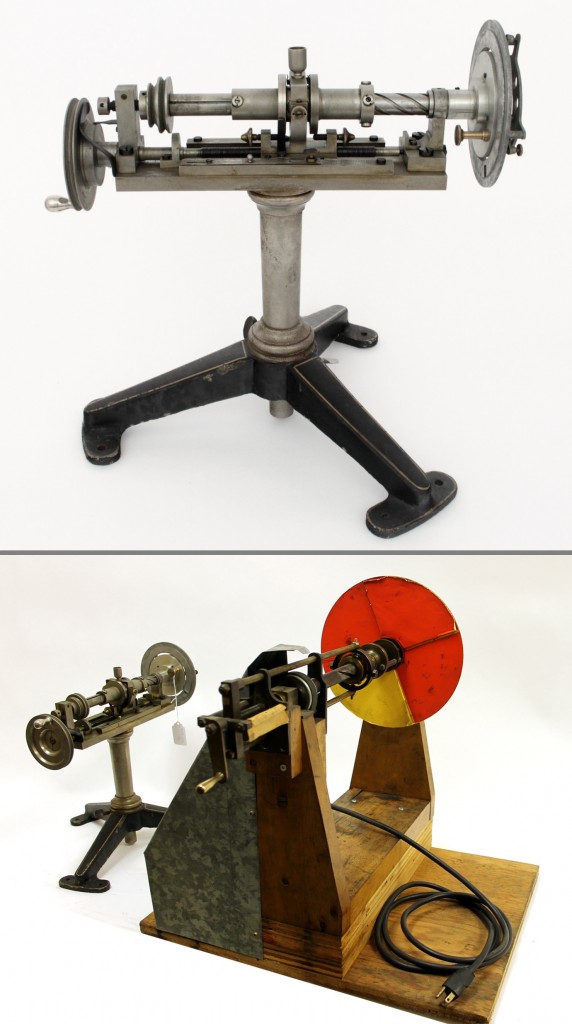 Top: Side view of the Zimmermann colour variator (2012.psy.73). Bottom: Shown beside a similar instrument that includes an electric motor and colour wheel. The second instrument was likely made in a University workshop.

In 1891, the University of Toronto equipped a psychology laboratory, the earliest  in the British Empire. The Zimmerman colour variator, a precision instrument made in Leipzig , survives in the Department of Psychology’s collection as evidence of the extensive research into colour vision carried out during the lab’s early years.

The colour variator  is a compact apparatus. An assembly of machined steel parts weighing nearly 20 pounds, it would fit within a 40cm cube. Architectural mouldings turn the central pillar into a classical column, hinting at its place among the expensive and prestigious apparatus purchased by well-funded universities. Two pulleys, where the instrument would have been connected by a belt to an electric motor, are located at one end of the central shaft. Holes in the base permit the instrument to be bolted to a surface, dampening vibrations from the motor. A wheel at the back of the instrument permits the operator to make fine adjustments.

The colour variator is a form of “colour mixer”, a mechanism (typically a hand crank, clockwork, or an electric motor) that spins a coloured disc. At a sufficient speed, the eye sees a blend of colour–a phenomenon demonstrated in 1855 by the Scottish physicist James Clerk Maxwell (1831-1878)  who showed that a range of colours could be created by adjusting the proportion of several primary colours on a spinning disk. Colour mixers of various kinds were common in the early psychological laboratories that proliferated over the last quarter of the nineteenth century. They were most often used to demonstrate aspects of colour perception.

First described in 1894 by Karl Marbe  (1869-1953), professor of philosophy and ethics at the University of Würzburg,  the colour variator permitted its user to alter the mix of colour on a spinning wheel by shifting the angular relationship of two coaxial portions of a colour wheel. This fluid control over the relative mix of colour, along with the ability to precisely measure the degree of change, provided an effective tool with which to quantify aspects of colour perception. Two scales, one embossed on the crank at the back of the instrument, one running parallel to the shaft, provide a precise indication of the position of the mechanism.

Though records of its purchase have not survived, this instrument is very likely to have been acquired during a period ending in 1908, when, under the German psychologist August Kirshmann (1860-1932), the psychological laboratory at the University of Toronto Department of Philosophy was a major centre for the study of colour and vision.[1. A colour variator made by Zimmermann was in use at the Psychological Laboratory of the University of Toronto by 1902. Whether it was instrument, or an earlier model that no longer survives, is unclear as I have been unable to determine precisely when this particular model would have been first available. In fact, the “spiral nut” mechanism of this model,  first described by Lummer and Brodhun in 1896, is an improvement on Marbe’s original design though instruments with both mechanisms were produced by Zimmermann and both were likely to have been referred to as a Marbe-Zimmerman colour mixer (or some variation of that name.) Given Kirschman’s departure in 1908, it is unlikely to have been purchased after that year.]

A German Science comes to Canada

The first laboratory devoted to the study of experimental psychology was established by Wilhelm Wundt (1832-1920) at Leipzig University in 1879. Working within the context of the widely admired German university system, which stressed applied laboratory research, Wundt supervised 186 doctoral theses between 1875 and 1919. Many of these students went on to found psychological laboratories at universities across Europe and North America.

In 1889, University of Toronto President Sir Edmund Wilson (1895-1972) led a faction that sought to fill a vacant position in the Department of Philosophy with a practitioner of the new Wundtien experimental psychology. Prevailing against powerful nativist opponents who demanded that the position go to a Canadian, Wilson and his allies appointed James Mark Baldwin (1861-1894), a Princeton-educated American psychologist who had studied for a year in Wundt’s Leipzig laboratory.[2. For a detailed account of Baldwin’s hiring, see: Green (2004). “The Hiring of James Mark Baldwin and James Gibson Hume at the University of Toronto in 1889.” History of Psychology 2004, Vol 7, No. 2, pp. 130-153.] 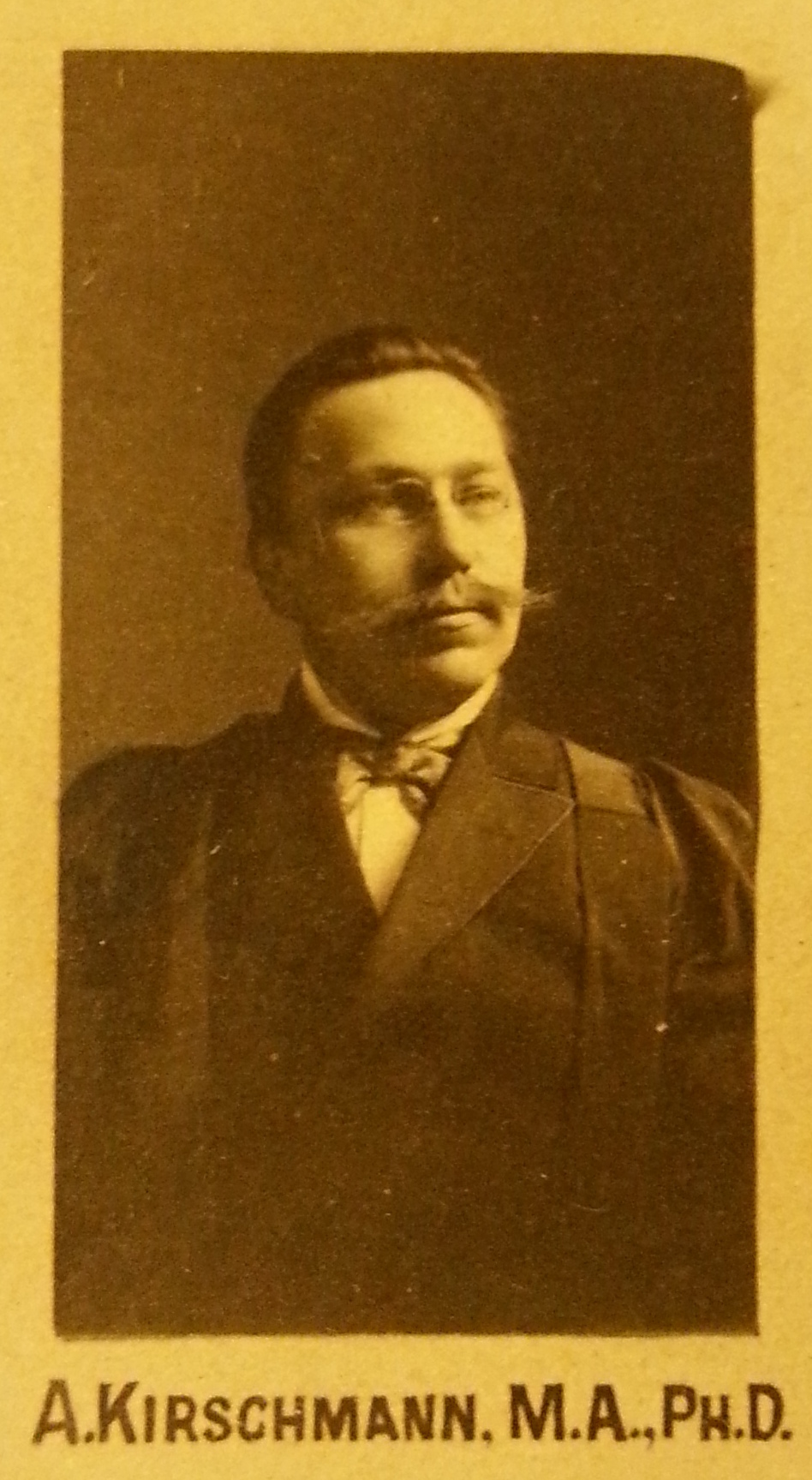 Before he left Toronto to return to Princeton in 1893 for a higher-paying position, Baldwin equipped a psychological laboratory in the University College building, which he described  in 1892 for the journal Science. He was replaced by August Kirschmann, a German scholar who had graduated from Wundt’s laboratory in 1890 with a thesis investigating the quantitative relationship between brightness and colour contrast. Under Kirschmann’s tenure, research at the laboratory focused primarily on colour and vision.

Wilhelm Wundt’s science of experimental psychology had developed a series of instrumental technologies. Wundt worked closely with the Leipzig Zimmermann atelier that produced and sold instruments such as the ubiquitous Hipp chronoscope (a precision timing device suitable for measuring reaction time), along with associated calibration equipment such as the control hammer and the gravity chronometer. As new psychological laboratories proliferated, they acquired essential equipment from Zimmermann. Both James Baldwin and August Kirschmann would have used Zimmermann instruments while studying at Wundt’s laboratory. They equipped the University of Toronto’s psychological laboratory with  these familiar instruments. 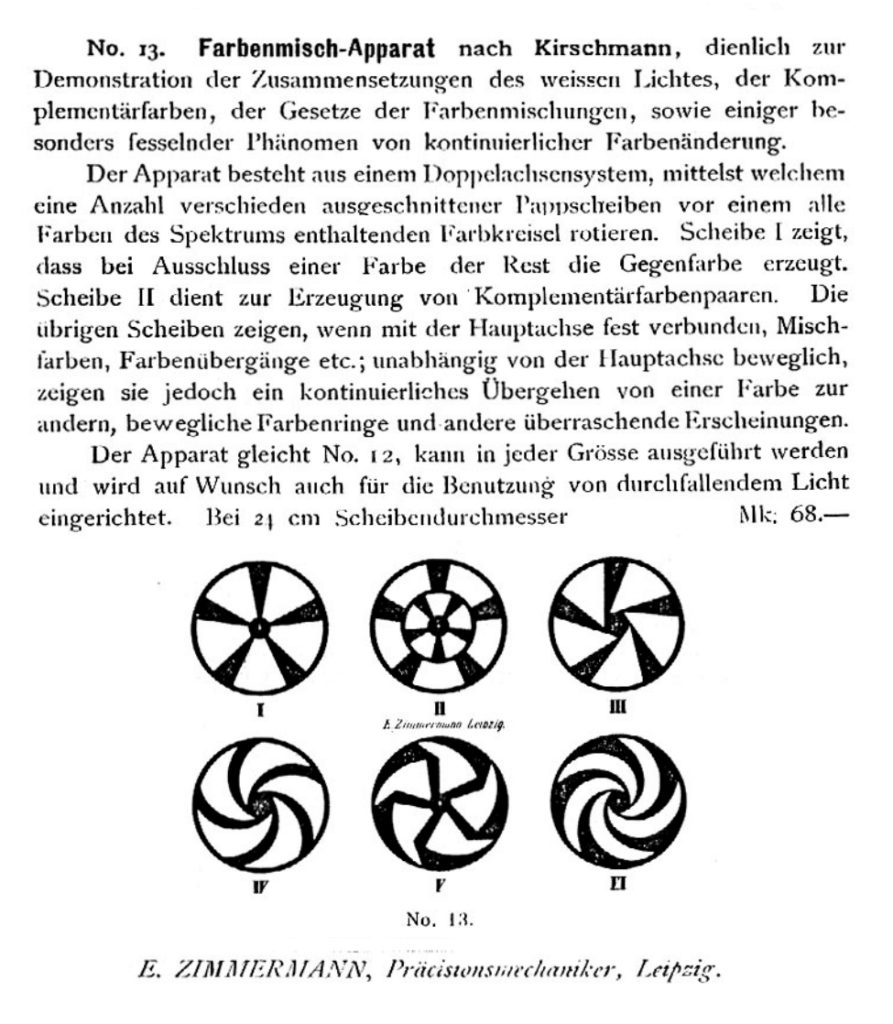 Kirschmann's colour mixing apparatus as it appeared on pp. 4-5 of a 1903 E. Zimmermann catalogue of psychological instruments. Image provided by the Max Planck Virtual Laboratory's library of instrument catalogues.

The diffusion of psychological instruments soon became a two-way exchange. Laboratories beyond Leipzig, often led by Wundt’s students, developed new experiments that required improved equipment like the colour variator. Among numerous colour-related apparatus devised by Kirschmann were  several new colour disks developed in support of his argument that saturation was a necessary component of colour theory.[2. Kirschmann (1896). “Color-Saturation and Its Quantitative Relations. ” The American Journal of Psychology 7: 386-404;  Kirschmann (1898). “The Representation of Tints and Shades of Colors by Means of Rotating Disks.” The American Journal of Psychology 9: 346-350.]   During his tenure in Toronto he also developed a double axle colour mixer, as well as a series of disks, used to demonstrate the composition of white light, the laws of colour mixture, as well as “some particularly intriguing phenomena of colour change.” The Farbenmisch-apparat nach Kirschmann and its associated disks appears among the numerous colour mixers produced listed in Zimmerman’s 1903 catalogue, just before a version of Marbe’s colour variator.

Colour mixers were common in early psychological research because they demonstrated features of human vision that were central to debates about colour perception. Why, for instance, would a wheel of yellow and red sectors blend to produce orange, while mixtures of complementary colours (for instance blue with yellow, or red-violet with green) produced an uncoloured grey? The existence of such ‘unmixable’ colours led German physiologist Ewald Hering  (1834-1918) to propose his opponent theory of colour vision in 1892, positing ‘opponent’ processes (yellow-blue and red-green, plus white-black for intensity) responsible for colour vision.

Similarly, colour mixers could be made to show effects of  illumination on colour vision. For instance, a neutral grey mix of two complementary colours would appear tinted if the lighting conditions were changed—an instance of the ‘Purkinje effect’, the eye’s varying sensitivity to different colours (i.e different wavelengths of light) at different levels of illumination.

The colour variator was a more effective tool for exploring such phenomena than a conventional colour mixer, which had to be stopped in order to adjust the mixture of colour. Under Kirschmann’s supervision,  graduate students at the University of Toronto Psychological laboratory used the instrument to study both complementary colours, and the Purkinje effect. In the latter case, a student named R. J. Wilson used a mix of black and white greys of variable brightness. This mix was displayed against a fixed ring of colour with the subject indicating when the brightness of the grey seemed to match the background colour.  Varying levels of ambient light, produced by progressively covering a window aperture with layers of tissue paper, provided a means to graph the eye’s sensitivity to colour at different levels of illumination.[2. There are at least two references to the colour variator’s use in experiments carried out at the University of Toronto. These are found in “On Colour-Photometry and Some Quantitative Relations of the Phenomenon of Purkinje” by R. J. Wilson, and the “Complementary Relations of Some Systems of Coloured Papers” by D. C. MacGregor and D. S. Dix. Both were published in the second volume of University of Toronto Studies: Psychology Series (1907), edited by August Kirschmann.]

Much of Kirschmann’s work touched on the relationship between illumination and the perception of colour. Black paper is indistinguishable from white if exposed to bright light and viewed through a narrow tube that removes other clues from our visual fields. At the extremes of darkness and illumination, colours merge into white light, or fade into colourlessness.  Working, like many early psychologists, within a philosophy department, Kirschmann gathered his experimental insights on human experience of colour into a bracingly literal-minded critique of the language of aesthetics, noting: “Pigments may be transparent, perceived coloured surfaces are never so, and all the beautiful phraseology about painting ‘air,’ a ‘ transparent sea,’ an ‘endless or hazy perspective’ is nothing but inaccurate talk by people who have not sufficiently analyzed the problems which they discuss.” The painter, he argued,

“…may even raise the intensities of very small white, yellow or orange surfaces so as to give the appearance of a certain luminosity, for instance, in the case of glowing coals and sparks of a smith’s fire, the illuminated windows in an evening landscape, the Alpine glow, etc. But he should never try to paint the flames of candles, lamps, or torches themselves, or the celestial bodies, for this is, with respect to true reproduction of intensities, absolutely impossible.”[2.  pp. 194, 197. August Kirschmann. “Conceptions and Laws in Aesthetic” In University of Toronto Studies: Psychology Series Vol. 1. (1900), edited by August Kirschmann.] 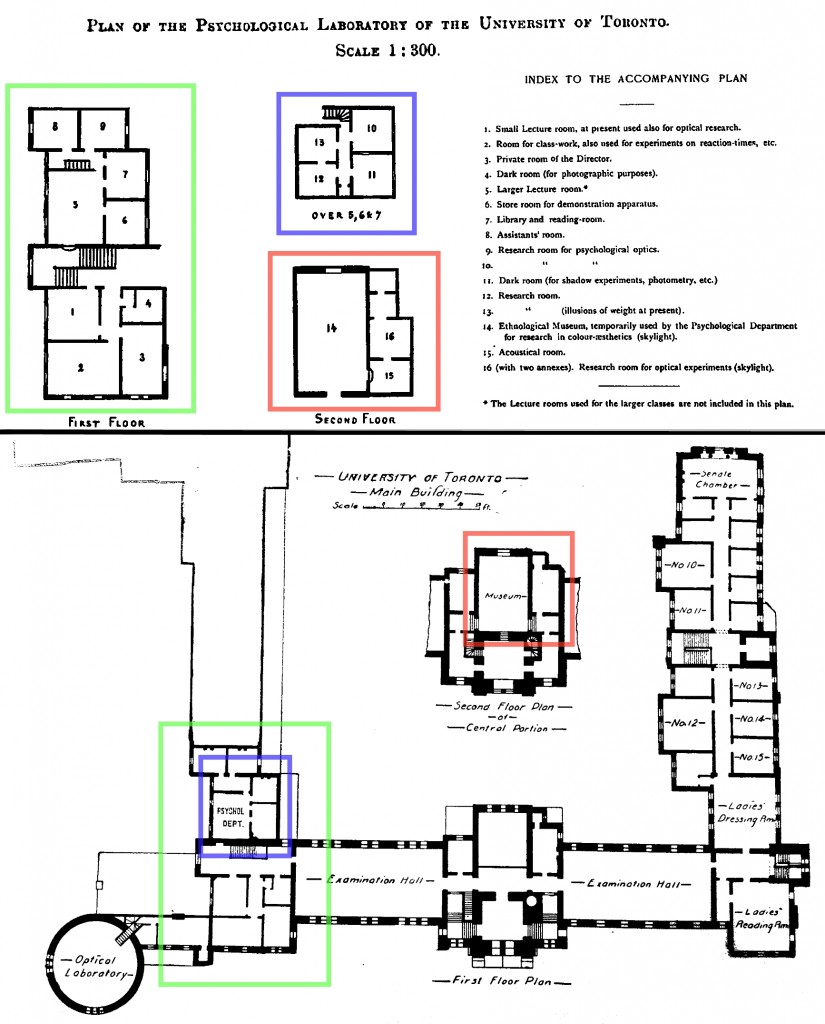 Layout of the early psychological laboratory c. 1900 compared with a map of the University College building from the same period. 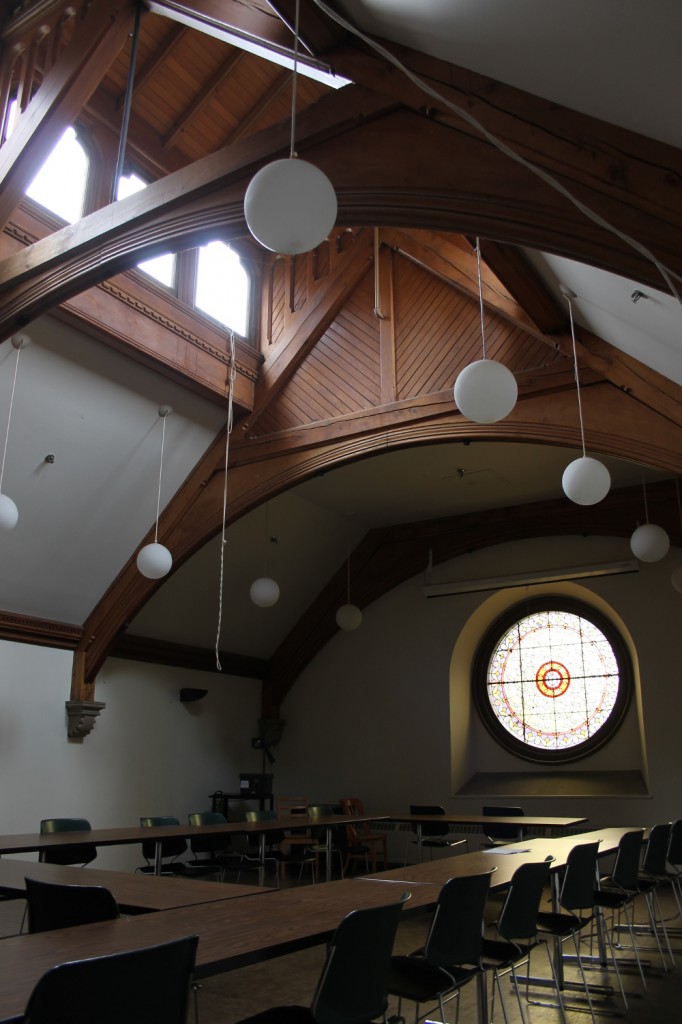 A room in the University College building formerly used by Kirschmann and his students for psychological experiments requiring daylight illumination. This is the larger room in the area indicated in red on the maps above. At the time, it held the ethnological museum which consisted mostly of artifacts (notably a large collection of skulls) that had survived the fire of 1890.

The spread of electrical lighting would soon render brightly-lit interior spaces more common and convenient—the founding of the psychological laboratory had, in fact, been delayed by the 1890 fire at the University College building caused by an overturned tray of kerosene lamps.  The Commission Internationale de Photométrie, convened in 1903 to establish international standards for gas lighting, would have discussed many the same problems that were then being explored by Kirschmann and his Toronto students. Much international work on standards for colour and illumination was to follow in the coming decades.

After departing for Germany on account of ill health in 1908, Kirschmann did not return. A partial salary from the University was cancelled in 1915 when patriots in the local press discovered the arrangement.[3. C. Roger Myers. “Psychology at Toronto” In History of Academic Psychology in Canada. Edited by Mary J. Wright and C. Roger Myers. (1982), p. 79.] The colour variator, along with other German instruments in the psychology collection, can be seen to represent a period during which German research provided an academic ideal, as well as a model for the collaborative study of human perception.