On June 5th 2012 a rare astronomical event occurred: a transit of Venus. This passing of Venus in front of the sun is the second and final time it will occur this century with the next event happening in 2117. For this monumental occasion, the University of Toronto Scientific Instruments Collection (USTIC) in conjunction with the Astronomy department worked to highlight the event to the public.

The University of Toronto has had a strong tradition of studying transits and as a result equipment used over one hundred years ago still remains on campus. These instruments were sought out, safely assessed for stability, identified and had their provenance investigated by the UTSIC team. Subsequently, a ‘viewing party’ on June 5th was organized at Varsity Stadium where over five thousand members of the public showed up to watch the transit actually take place. They were given safety viewing glasses as a precaution, and instructed on how to view the transit as it happened.

To showcase the cultural importance the transit of Venus has played, a play by Canadian playwright Maureen Hunter about astronomer Guillaume Le Gentil`s struggles of tracking the transit was adapted and preformed for the event. To further showcase this confluence of arts and science, Victor Davis, the composer of the opera based on the play also had his work featured. 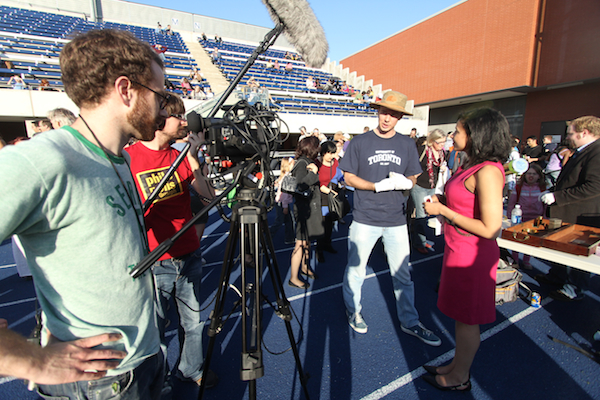 To document the entire endeavour in conjunction with commissioning the play, organizing for the composer to showcase his operetta, helping to frame the exhibition and overseeing the logistics of helping to plan the event at Varsity Stadium, the UTSIC team produced a documentary on the making of the entire event. With a running time of approximately sixteen minutes the short documentary was made available to the public on the IHPST website in August, and has prompted a positive response from both the science and arts communities. In particular those involved in the study of material culture have taken a great interest because it offers an example of how artefacts can be made accessible and how visual media used as a teaching tool.

Creating a documentary contributed to the advancement of knowledge by communicating science in a dynamic manner, and in doing so served to make the history of astronomy more accessible to the general public and future scholars.

The Transit of Venus Documentary can be seen here: