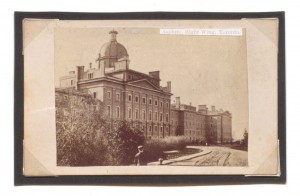 The Provincial Lunatic Asylum, located at 999 Queen Street was opened in January 1850. The asylum was constructed with the aim of improving the care and treatment of the insane.

It was built in response to an act passed by the Upper Canadian House of Assembly in 1839 authorizing the construction of an asylum “for the reception of Insane and Lunatic persons”.

This photograph of the Asylum is from 1868.