When researching the history of scientific instruments, scholars hope to complement the physical description of objects with insights on personal, institutional, and experimental histories. These insights result from studying an instrument’s construction and its acquisition, operators, and uses at an institution. Commonly, historical research provides facts and well-founded intuitions, but it also suggests research questions that may remain unanswered. These open questions are gaps in our knowledge about the material culture of an institution, but they can be used to illustrate parts of the process of writing an instrument’s history. 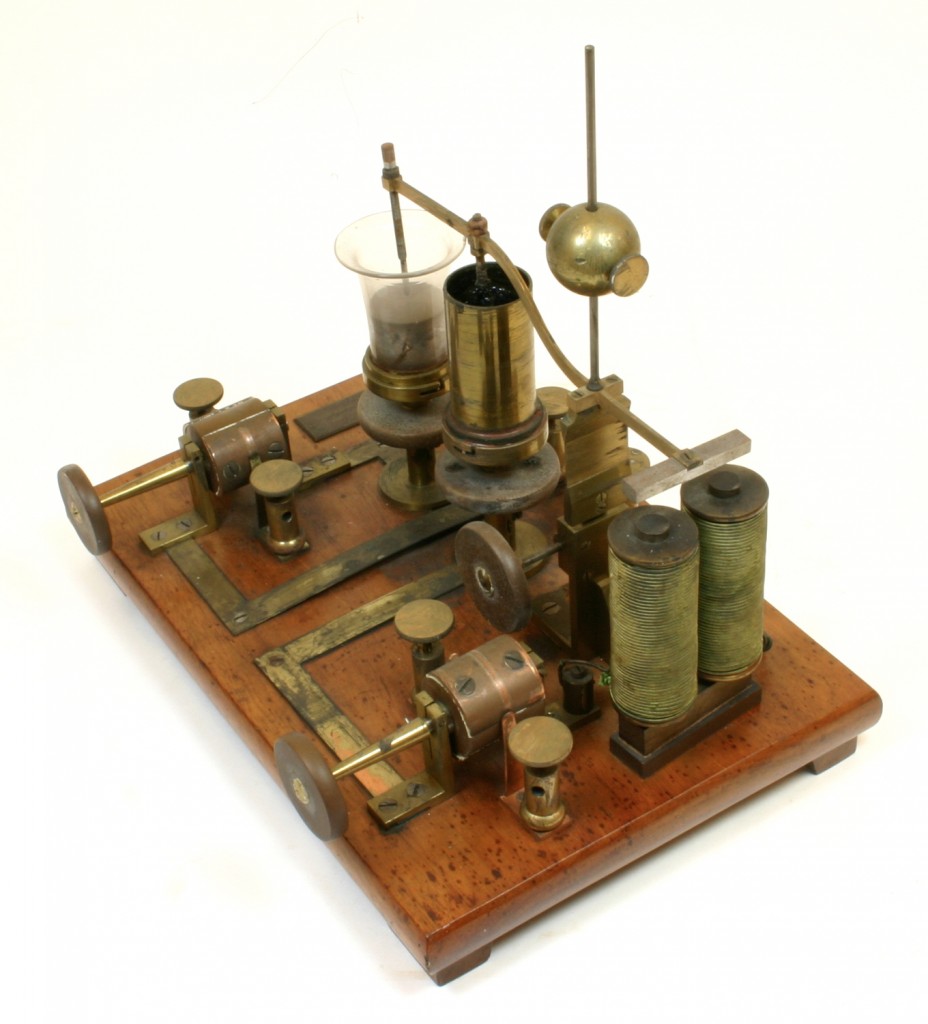 Recently, I started researching an aesthetically interesting and puzzling instrument from the collection of the Department of Physics. Basic notions about the possible workings of this instrument led me to consult online resources for scientific instruments (one of them is the “Physics Museum of Sardinia”) and physics textbooks from the construction period of our instrument. I found that the instrument displayed above is a Foucault Switch, a type of automatic circuit interrupter used widely in the late 19th century and invented by the French physicist Jean Bernard Léon Foucault (1819-1868). During that century, scientists and engineers created new uses for electricity and developed increasingly sophisticated circuit elements to control instruments and electric phenomena. Among these elements were different interrupters—basic components that open or close an electric circuit to regulate conduction.

Some devices, such as voltage transformers, require steady sources of non-continuous current. Direct currents supplied to them by voltaic piles or generators must therefore be interrupted periodically. This interruption can be achieved by manually opening and closing a switch, or through an automatic circuit component that successively attracts and releases a pivoting metallic conductor. The Foucault switch is an automatic interrupter in which a balancing rod reacts to an electromagnet, opening and closing the main circuit as it swings like a metronome. Compared to contemporary models, the Foucault switch allowed switching with higher speeds, while permitting the swinging frequency to be regulated.

The UTSIC collection hosts a complete Foucault switch. It is built on a wooden board that holds two cylindrical vessels filled with mercury, an electromagnet made of a pair of coils, and two pairs of terminals to connect a main source and a secondary circuit to feed the electromagnet. Rising vertically, a pivot supports a horizontal conducting balancing rod that reacts to the electromagnet and oscillates, creating contacts through the mercury. A metallic sphere attached at variable height to an extension of the pivot allows changing the oscillation frequency. Copper plates serve as conductors between all circuit elements and an engraved metal plate displays side by side the names of two renowned Paris-based instrument makers of the 19th century—the German-born Heinrich Ruhmkorff (1803-1877) and his French successor Jules Carpentier (1851-1921). This plate suggests that the switch was constructed after 1877, Ruhmkorff’s death year, when Carpentier purchased his workshop.

After defining broadly the instrument’s construction date, the University of Toronto Archives are the natural repository for information about its acquisition and use at the university. The first set of documents that I consulted comes from the “Minutes of the Board of Management”. The succinct records of topics discussed in the board’s meetings show that the board authorized payments for the acquisition of European instruments for the university’s “School of Practical Science”. Particularly suggestive are mentions of purchases, payments, insurance, and utilization of new scientific instruments done by physics professor W. James Loudon (1841-1916) after 1878. This year resonates with the possible construction year of UTSIC’s Foucault switch and with the foundation of the School, which operated from 1878 to 1906. According to the minutes, in 1878 a payment went to the instrument maker Carpentier.

Following this path, two avenues seem fruitful: first, the Archives hold immense voucher books, where researchers can find large amounts of orders and invoices that may shed light on the instrument’s provenance. However, I have not found Carpentier’s invoice. A second possibility lies in investigating Professor Loudon’s personal records for correspondence, notebooks, or orders that could refer to instrument purchases, but the current holdings date back to 1885 and, thus, do not cover the first years of the School. Whether more precise information of UTSIC’s Foucault switch can be found depends on further research, on the invaluable help of the Archives staff, and on a notable degree of fortune around the preservation of archival material and its localization.