The Bendix Hygrothermograph: A Mechanical Recorder of Temperature and Humidity

Over the spring and summer of 2011, several generous donations have made it possible for us to take the first steps towards museum-quality storage for the UTSIC collection. This post discusses an instrument that came to our attention as we began to think about quantifying the environmental conditions in our storage space. 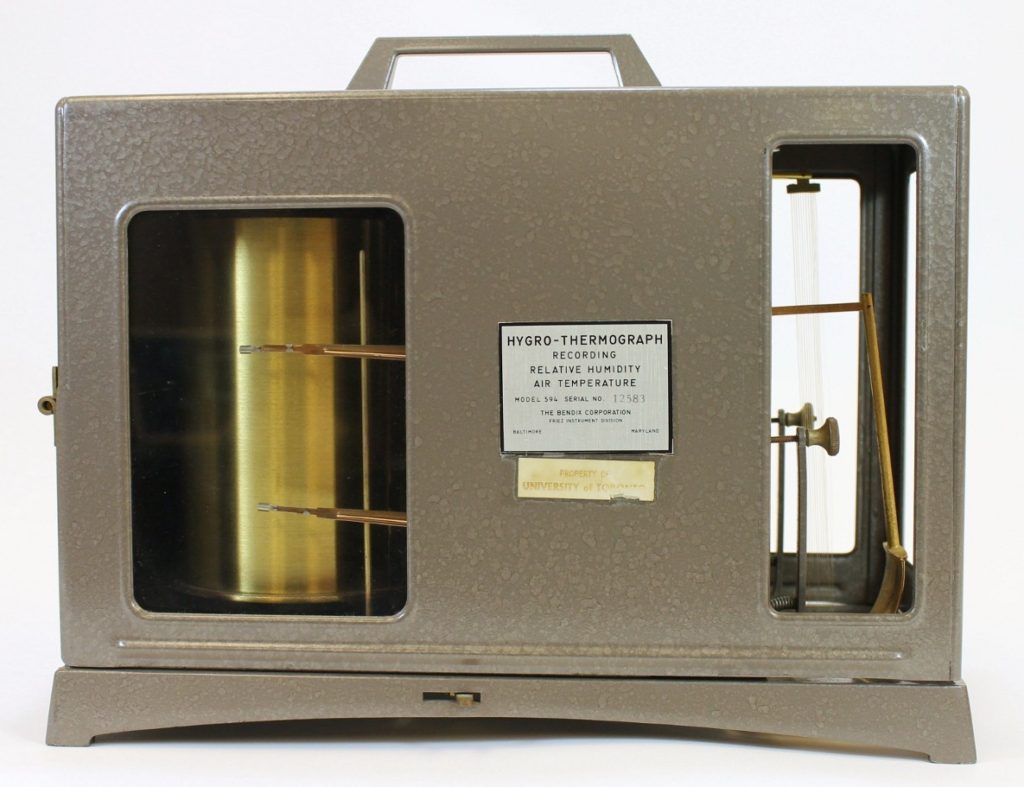 Temperature and relative humidity (RH) are major considerations for any collection as some materials are particularly susceptible to damage from extremes, or too rapid fluctuations, in either value. The Canadian Conservation Institute (CCI) provides target values for temperature and RH. Established museums, collections and archives, such as the University of Toronto Art Centre, use a variety of HVAC (heating, ventilation, and air conditioning) equipment, as well as sophisticated monitoring instruments, to maintain their collection environments. With the assistance of faculty and students with the Museum Studies program, we will begin to monitor our storage space to determine what needs to be done to maintain a stable environment. 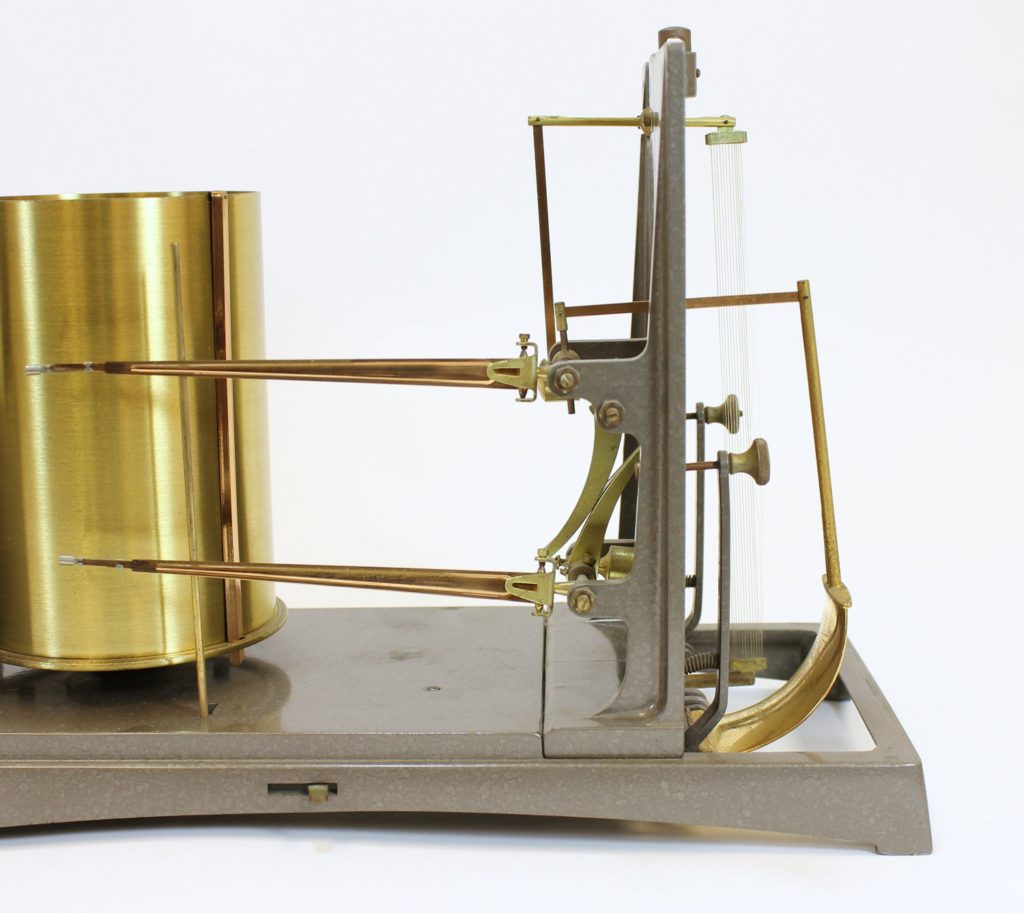 The Bendix 594 with cover open. The shiny bimetallic strip actuates the top arm marking temperature. Behind it is the hair bundle that actuates the lower arm, marking RH

Measuring values temperature and RH at a given moment isn’t difficult. Reasonably accurate and cheap digital instruments are available, for instance, to consumers wishing to monitor a damp basement. Far more useful (and expensive) are instruments that can provide an accurate record of temperature over the cycle of days, nights, and seasons. Reflecting on this problem, we realized that we had instruments that had once been used at U of T laboratories for precisely this purpose. At least one of these, a Bendix Model 594 hygrothermograph appears to be in good condition and is common enough to use (though accompanying documentation suggests that it requires calibration.) Two such instruments were acquired by the Institute for the History and Philosophy of Science and Technology in 2004 from (what was then) the Department of Botany. Unfortunately, our records tell us little about how and where these were operated other than that both are marked “plant pathology”. Surviving documentation suggests that the newer of the two Bendix hygro-thermographs was in use in the early eighties. A second, similar but older, model was last operated in the late sixties as indicated by the chart attached to the recording drum. This second instrument seems to have been last used to only measure temperature.

Many will recognize this type of instrument from visits to museums or galleries, where they can be spotted tucked away in corners. Like the Pyro Optical Pyrometer, discussed in a previous post, the Bendix hygrothermograph is still being made, though its maker is now called Belfort Instrument. The heart of the instrument is a mechanical clock housed in a brass cylinder. Instead of turning hands across a dial, however, this clock turns itself. The cylinder can be set to complete a rotation in either one day or one week—newer instruments use a battery-driven quartz mechanism and will record for 31 days. Old or new, all such instruments incorporate a replaceable chart that is clipped around the cylinder. A hygro-thermograph chart typically features two scales, one for recording temperature, the other relative humidity. 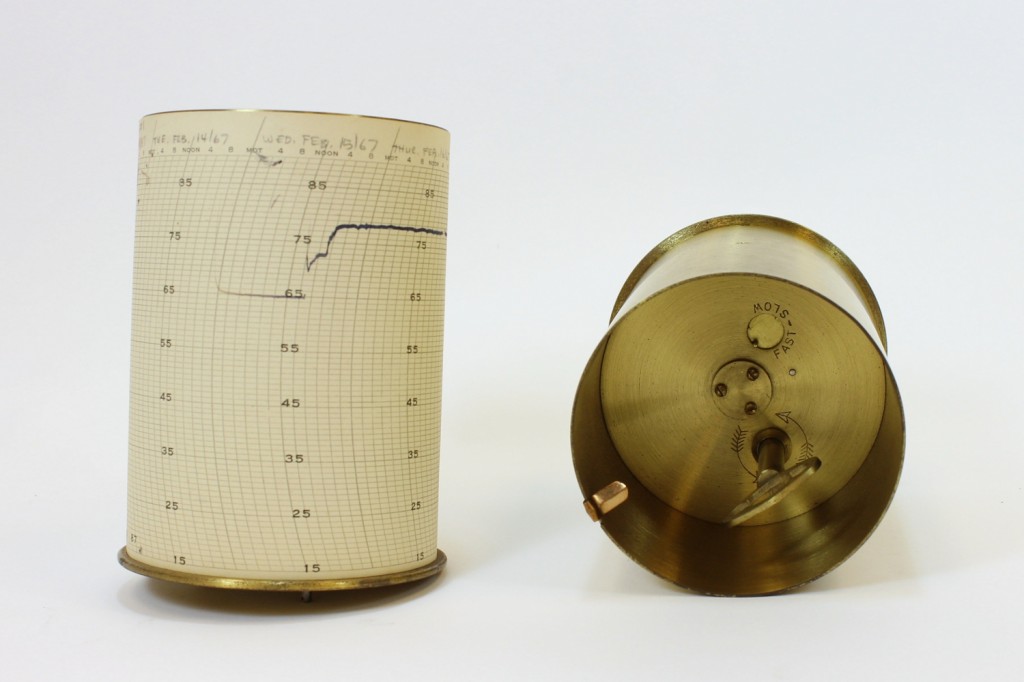 Two recording drums used with the Bendix 594. The drum on the left has a one-week temperature chart clipped to it.

As the cylinder rotates, each scale is marked by an inked pen. These are actuated by mechanisms that react to atmospheric changes. Temperature is recorded using a still-common method—a bimetallic strip whose deflection changes according to the difference in the thermal expansion of two different metals (usually steel and copper or a copper alloy) that have been joined along their length.

In 1783, Horace-Bénédict de Saussure introduced his new method for measuring humidity with a classical flourish: a putto playing with another’s hair. The second pen, tracking humidity, is actuated by hair—specifically human hair that has been treated to remove moisture and natural oils. This treated hair will vary in length between 2 and 2.5% across the range of relative humidity. This simple, accurate, and reliable way of recording RH remains relatively unchanged since it was first introduced in the eighteenth century by the Swiss philosopher Horace-Bénédict de Saussure in his Essais sur l’Hygrométry (1783). 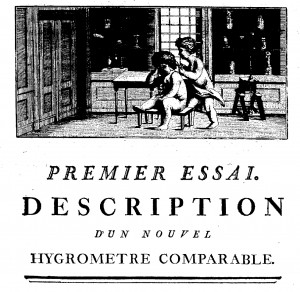 In 1783, Horace-Bénédict de Saussure introduced his new method for measuring humidity with a classical flourish: a putto playing with another's hair.

While the hygrothermograph is simple and reliable, it shows some of the difficulties embodied in older mechanical approaches to gathering data. Most obviously, it is labour intensive and, no doubt, demands a certain level of skill and experience to use accurately. Modern data loggers (the hygro-thermograph’s digital equivalent) will transfer data directly to a computer. The data from a mechanical hygrothermograph must be read from an inked chart. Charts need to be regularly replaced and the ink refilled. These inked charts accumulate. Using this device on the 24 hour setting would, over time, leave you with a fair amount of cardboard to store. Finally, supplies are not cheap. The slow path of the pens across the chart surface requires special ink and cardboard so that the ink does not dry out or quickly soak into the chart. In the end, given issues of calibration and long-term expense, we will likely spring for a digital data logger. It is remarkable, though, that these simple and robust hygrothermographs still have a well-established place in many institutions. They are among the survivors or a generation of instruments that traced data in ink, or smoked paper, against a rotating drum. Many such instruments, from a variety of scientific contexts, will be added to the UTSIC catalogue in the coming months and years.