by Shivangi Trivedi and Erich Weidenhammer

The vast majority of the instruments in the UTSIC collection come from the University of Toronto’s science departments. A few instruments, however, have come from private donations to the Institute for the History and Philosophy of Science and Technology.  Among these is a remarkable collection of over 50 slide rules and other mechanical calculating devices donated by the heirs of Professor L. E. Jones (d. June 23rd, 1999). Professor Jones taught applied physics at the University of Toronto from 1936 to 1944 and Mechanical Engineering from 1944 to 1975. A memorial tribute presented to the Council of the Faculty of Applied Science and Engineering on October 7, 1999 paints him as a colourful character—a calligrapher, a poet, a fan of heraldry, and a member of the Monarchist League. In the coming days, all 52 objects of his former collection will be added to the UTSIC catalogue.

Slide rules are remarkable instruments. Before cheap microprocessors made electronic calculators commonly accessible, these simple yet ingenious mathematical tools were used to perform a range of complicated calculations. They were a fixture of mathematical and engineering practice for hundreds of years, from their invention in the 17th century until the mid-1970s and could be found everywhere from grade school classrooms to the Apollo space capsules where they were used as backup calculators. As the collection demonstrates, they varied considerably in complexity, material, propose, and design. Professor Jones’ collection includes not only slide rules, but a variety of other mechanical calculating instruments, from abaci (complete with a detailed instruction book on how to use an abacus) to an arithmometer — a complex wood and brass instrument developed in the 19th century that uses a geared assembly actuated by a crank to add, subtract, multiply and divide. 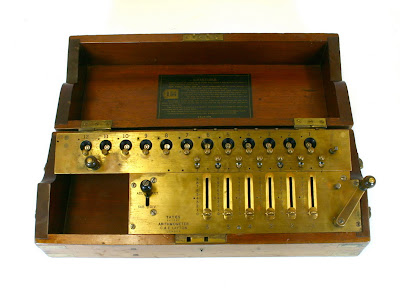 Although the UTSIC remains focused on instruments used at the University of Toronto, the L. E. Jones Slide Rule collection provides a rare and useful exception. In the spirit of L. E. Jones’ eagerness for the material history of engineering computing, the UTSIC will consider further expanding this collection, given the opportunity.