In the basement of the U of T’s Gerstein Science Library, there is a dusty set of leather-bound volumes that contain the full 1879 to 1916 run of French periodicalLa Lumière Électrique (“The Electrical Light”.)It is an interesting read and very useful for those wishing to research our collection of fin de siècle electrical instruments.  La Lumière électrique documents a remarkable period when industry, science, and everyday life were being electrified while instrument-making workshops, traditionally a low-volume artisanal industry, evolved rapidly to keep up with demand.

Among the factors driving this demand were research laboratories being founded across North America. Political demands that the power of institutionalized research be harnessed to lift society into a modern, industrialized age sent university officials and brokers scrambling to centers of production in England, France, and Germany in search of the latest instruments.

Founded in 1878 the University of Toronto’s School of Practical Science acquired many instruments over the late 19th and early 20th centuries.  Instruments from this period are thus well represented among the UTSIC  collection.  Particularly notable is the large number of instruments made in Paris by the Carpentier electrical workshop. These include an electrical resistance box, an Ammeter, an inverting telescope, a spectroscope, and a galvanometer (left). No doubt further instruments from this prolific maker will turn up as the cataloguing process progresses. 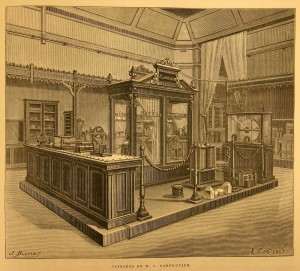 From the yellowed pages of La Lumière Électrique: The Carpentier display at the 1882 Paris International Electrical Exhibition.

Why so many Carpentier instruments? La Lumière Électrique offers an answer. An article on the Carpentier workshop (translated below) depicts the Parisian workshop at the vanguard of applying mechanized production techniques to work that had traditionally been done using hand tools.

Educated as an engineer at the  Ecole Polytecnique in Paris, Jules Carpentier (1851-1921) purchased the workshop of the electrical instrument maker Heinrich Ruhmkorff’s which had gone to auction following the death of its founder in 1877. Carpentier’s business flourished and expanded. He was hailed as a paragon of the French industrialist even as Paris was gradually ceding its place at the forefront of instrument manufacturing to centers in Germany.

La Lumière Électrique’s glowing endorsement of Carpentier’s modern methods provides an early glimpse into a period of change which saw the manufacturing of precision instruments pass from artisanal makers to an array of specialists—from machine operators to the managers and designers under whose watchful eye they worked. Examine a number of contemporary instruments of a particular type from the UTSIC collection, say, galvanometers, and you will see these manufacturing changes embodied in their design and materials.

In the last issue of the journal we pointed out the importance of electrical instrument makers and their service to progress of the science of electricity and its applications. We took as our example the Goodwin workshop that has become the Parisian centre for the fabrication of Brush machines, among most original and best of all the instruments 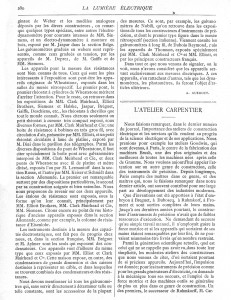 created since that of Gramme. Today we wish to draw attention to another area of construction: that of precision instruments. Paris has long counted masters of this genre among its ranks, who, as we indicated in our last article, have often contributed to the development of modern industries.

So many inventions have been brought from an embryonic state by Breguet, by Duboscq, by Ruhmkorff, by Froment, and have left their hands fully complete. Yet until recent years, precision instrument makers had only meager resources to produce them. Relying only on manual labour, they hardly made use of motor power. If the instruments that left their hands were remarkable for their polish, they could nevertheless only be supplied in limited numbers. Who among the current generation of scientists cannot recall having seen the modest workshops of the instrument makers just mentioned, in all their simplicity, from which so many precious instruments nevertheless emerged? Today the trend is towards the use of all mechanical resources, as much for precision instruments as for large electrical generators. Motor power and machine tools are used more and more generally in this kind of construction. One of the first, M. Carpentier, Ruhmkorff’s successor, has clearly chosen this path. His new workshop on Delambre road (here depicted) shows a number of facilities that are very well laid out. Motor pow er is provided by a large gas powered Otto system of six horsepower. The transmission shafts powered by this machine, suspended below the gallery that 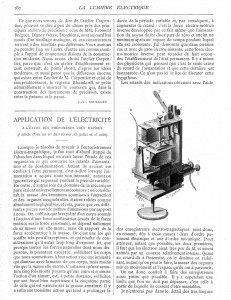 encircles the workshop, communicate movement to a whole series of lathes, some of which are set-up specifically for particular tasks. They also power tapping machines, drills, sanders, a screw machine, and a sharpening stone. At the centre are workbenches, well lit by the windows that form the ceiling. Still others are located in the upper gallery. On this gallery, at one end of the workshop, are the offices, arranged in such a way that the workshop may be the object of constant general surveillance.

It is evident that with the resources that we have just listed one can arrive at very satisfying results and construct quite a few apparatuses (or, for complicated instruments, parts of apparatuses) without allowing the good quality of construction to suffer, and always maintaining the same polish. One needs no more proof than the Baudot machine that is the object of general attention every day at the Exposition. One of these instruments came out of the Carpentier workshop. It had been modified to the point that it hardly resembled the Baudot machine as we

described it in this journal. It had certainly lost neither elegance nor polish. Other instruments from this workshop that we could mention are Deprez’s motors, his galvanometers, so useful today (and, incidentally, also built by the Breguet company) and finally the melographe, that electrical piano that punches its own cards in order to reproduce a piece of music. We will soon see one working at the Exposition in Hall 13. The mechanism of this apparatus is a little miracle of delicacy and serves to demonstrate, even better perhaps than the Baudot telegraph, what can be attained through the mastery of machine tools.

What we’ve just said about the Carpentier Workshop could be applied almost exactly to the principal precision workshops. Those of M. M. Froment Bréguet, the Digney brothers, Deschiens, are today equipped with analogous tools, and these makers achieve results that are little different. We could have taken either of them as an example of the application of what we have said about modern manufacturing. We have chosen the Carpentier workshop because it is a recently-built workshop whose construction, even at a glance, evidently follows modern ideas. The enormous difference between the workshop of Mr. Carpentier and that of his predecessor, the late-lamented Rhymkorff serves perfectly to show the contrast that, in the construction of precision instruments, exists between past and present.
—-