In Praise of Small Instruments: J.S. Plaskett, the Physical Laboratory Workshop, and the Humble Resistance Box

Hearing people talk about scientific instruments can occasionally sound like a competition for bragging rights. Who built the first electron microscope? Is that in North America, or the world? Who has the longest telescope? Which instruments were used by Nobel Prize winners as a part of their award-winning discoveries?

These questions are all well and good, but they tend to omit a lot of the “smaller” scientific instruments. A standard laboratory scale, tuning fork set, or ammeter may not have lead to ground-breaking discoveries, but they are historical artifacts all the same, and are deserving of historians’ respect. Though their place might have been pedagogical and their use pedestrian, these instruments are nevertheless windows into the past, objects which can provide us with a broader understanding of historical scientific beliefs, economic realities, and cultural practices.

Consider this simple resistance box (left), which was part of the Toronto Electrical Exhibition, a display of turn-of-the-century electrical instruments produced by the UTSIC in April-May, 2010. It is a common instrument whose sole purpose is to ensure a desired electrical resistance. At first glance, the resistance box is distinctly unremarkable. It’s not of particularly high quality and wasn’t made by a famous instrument maker. It’s a homemade instrument, and probably didn’t contain the precision necessary for research; its function was most likely exclusively pedagogical. In fact, it is little more than 19th century analogue of the variable resistors used by undergraduates in their first-year electrical labs. It’s not exactly in particularly good shape either – its bottom half appears to have gone missing and has been since replaced by a plexiglass case. In short, it is a humble instrument, functional in design and modest in capacity. 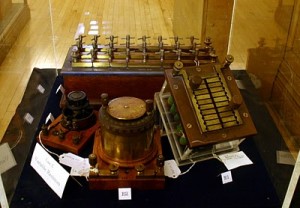 Variable Resistors on display - The Plaskett Resistance Box is on the right.

Yet, there is historical value in this resistance box that transcends its place in the lab. Unlike many of the Collection’s other instruments, it was most likely created at the University of Toronto. In fact, it is stamped “J. S. Plaskett”, who was most probably its maker. John Stanley Plaskett was a Canadian astronomer best known not for his design of resistance boxes, but rather of the 72-inch long reflecting telescope (since dubbed the “Plaskett Telescope”) at the Victoria Dominion Astronomical Observatory, in Victoria, BC. By the time it became fully operational, in 1918, this telescope was the largest in Canada and the second largest in the world. Plaskett would go on to become the Observatory’s first director and earn himself a place in the heavens with the 1922 discovery of the binary nature of the massive star now known as “Plaskett’s star”.

So what’s this famous astronomer’s name doing stamped upon a lowly resistance box? To understand this, we must understand that Plaskett didn’t enter the University of Toronto hoping to be an astronomer, but rather hoping to be a laboratory technician. In 1889, Plaskett sought employment from James Loudon, then Professor of Experimental Physics and future president of the university. He certainly asked the right man: Loudon, a tireless promoter of science within the university, was largely responsible for the establishment of the School of Practical Science in 1878 and its associated Physical Laboratory. Practical experience was essential for the lab, and Plaskett had several years in industry under his belt – his last job was at the Edison Machine Works in Schenectady, NY, a company set up by Thomas Edison to manufacture dynamos. Loudon saw potential in Plaskett and hired him as a “mechanician”, where he made, repaired, and recalibrated instruments. He also got his first taste of academic physics, where he attended lectures in which he assisted in scientific demonstrations.

DIY at the Physical Laboratory

The importance of the workshop in the 1890s was no small matter. While many instruments were purchased for the young Physical Laboratory abroad, such shopping trips were a rare and costly endeavour. When instruments were needed, and especially when they needed to be repaired or re-calibrated, the mechanician, not the catalogue, was frequently turned to. 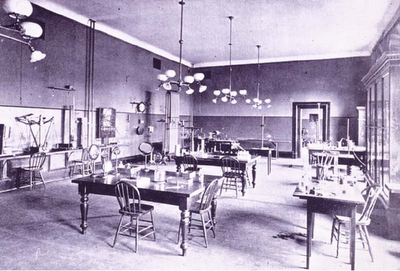 The Physical Laboratory at the University of Toronto, c. 1890. From David Pantalony's Altered Sensations, p. 121.

Years later, at the opening of the Physics building in 1907, Loudon reflected upon the importance of the workshop in the early days of the Physical Laboratory:

“On the inception of the laboratory I early learned how indispensable mechanical skill was, and how difficult it was to secure it in Toronto twenty-five years ago. Even yet we are far from the European professors for whom skilled mechanicians, opticians and glass-blowers are always at hand.”

The importance of a skilled mechanician cannot be understated. As Loudon quickly discovered, certain skills, such as glass-blowing and silvering mirrors, while necessary for the Laboratory, were not easily acquired. Their mastery was filled not only with the tacit knowledge that comes with trial and error, but costly trade secrets.

“In one of my first difficulties –how to make air-tight joints between glass and iron tubes– I applied to the late Professor Rowland, of Baltimore, and received the advice to break a dozen tubes in discovering a way. To learn by making mistakes is not a bad plan, if you can afford it.The art of glass-blowing, the most useful of al accomplishments in the laboratory, I learned during my absence in Paris in 1887.Silvering of glass mirrorsI learned from the late Mr. Roberts, the art dealer of King Street, who generously confided to me a valuable trade secret n the process, for which he had paid a very considerable sum of money.”

Loudon’s personal involvement in learning the requisite skills speaks volumes for the importance of practical expertise.

“In our first workshop I was obliged to work during spare hours, receiving instruction from one of our students in Mechanical Engineering… This kind of work, however, nearly proved the death of me, owing to the situation of the workshop in the basement of the damp building.”

Clearly, practical firsthand experience with crafting instruments was a necessity, and knowing how to create instruments, like this very resistance box, was an essential skill.

From the Workshop to the Stars

Plaskett worked as a mechanician from 1890-1895, during which he probably built this resistance box. In 1895 Plaskett moved from the workshop to the classroom and became a student, taking the same courses he once helped demonstrate. He graduated from the School of Arts in the “physics division” in 1899, and, while his future lay elsewhere, first in Ottawa and then in Victoria, the instruments he crafted remained at the University of Toronto. However, the skills he learned as a mechanician proved to be slightly more portable – Plaskett’s years designing, repairing, maintaining, and operating instruments would give him the necessary insight for the design, and subsequent creation, of Canada’s then-longest telescope. (Okay, so there was a little bit of “longest telescope” in this story after all.)

By collecting this homemade resistance box, we are collecting a part of the University of Toronto’s institutional history, a product of an age in which making basic instruments was an imperative for the University, and where technical knowledge and experience was critical to the success of the burgeoning Physical Laboratory. We are also collecting a part of Canadian history, the material history of a future astronomer’s initial exposure to institutional science. Indeed, the instrument-making knowledge, skills, and sense of design required for crafting our humble resistance box were ultimately carried forth into Plaskett’s Telescope. In this light, our humble resistance box ceases to be so humble: it has become a central player in intersecting narratives about the economic need to create one’s own instruments, the importance of technical knowledge and instrument crafting in a do-it-yourself culture, and a man who would one day transform Canadian astronomy and carve out a place for his name in the stars. 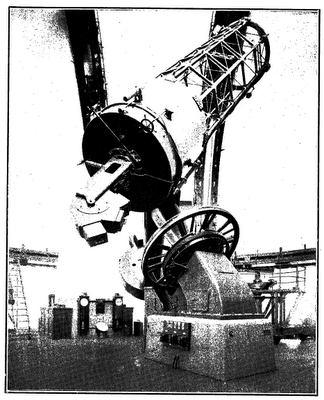 The Plaskett Telescope, at the time of its completion, in 1918. Original photo

While this resistance box may appear to be a mundane construction, the stories we can tell from it are by no means so. So think twice before you discount the value of that familiar piece of lab equipment. You never know what stories it may hold Perhaps they might even be your own.

P.S. For other Plaskett-related instruments in the UTSIC, see the other Plaskett Resistance Box and Plaskett’s recalibrated Carpentier Ammeter.

P.P.S. Special thanks to Michelle Hoffman for the quote by Loudon. The original is from Loudon’s “The Evolution of the Physical Laboratory”, and address delivered on the occasion of the opening of the Physics Building in 1907, published in the University of Toronto Monthly.